Get to know Canada’s National Summer Under-18 Team 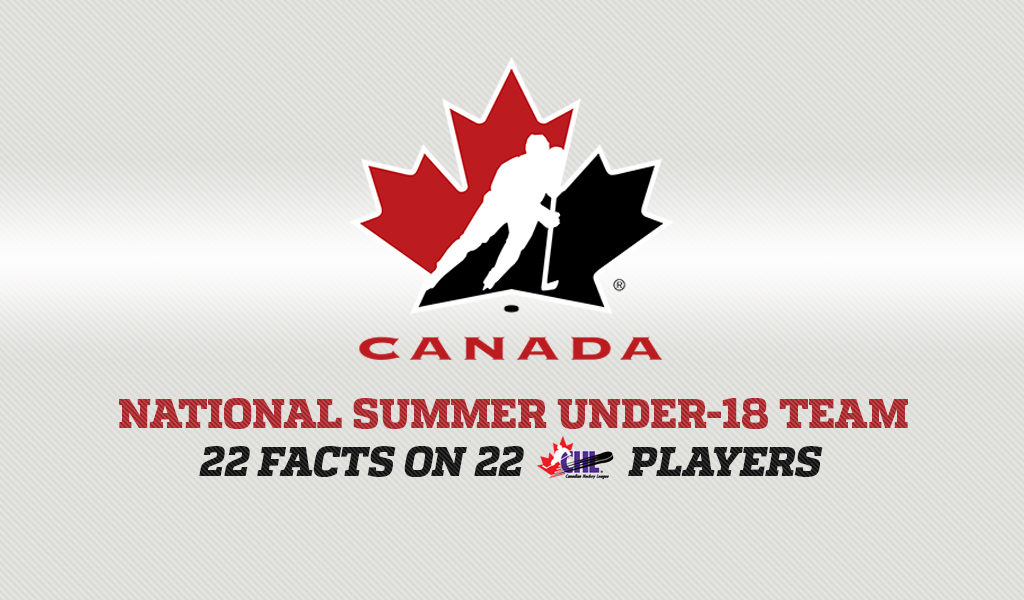 Twenty-two rising stars from across the Canadian Hockey League are ready to represent their country as part of Canada’s National Men’s Summer Under-18 Team at the 2019 Hlinka Gretzky Cup in Breclav, Czech Republic and Piestany, Slovakia, Aug. 5-10.

Mavrik Bourque of the Shawinigan Cataractes finished second in QMJHL rookie points with 65 in 63 games and tied for the lead in first year goal scoring with 25.

Quinton Byfield  was the first overall pick in the 2018 OHL Priority Selection chosen by the Sudbury Wolves before winning both OHL and CHL Rookie of the Year honours.

Will Cuylle was the first of just two 16-year-old OHL rookies to score a hat-trick this season and finished with 26 goals in 63 games as a Second Team All-Rookie for the Windsor Spitfires.

Jean-Luc Foudy of the Windsor Spitfires is an Ontario High School track gold medalist who led all OHL rookies with 41 assists in 63 games and is the younger brother of World Junior hopeful Liam Foudy.

Ridly Greig of the Brandon Wheat Kings is the son of former NHL forward Mark Greig and played minor hockey for head coach Michael Dyck winning a bronze medal at the 2018 Telus Cup with the Lethbridge Hurricanes.

Seth Jarvis led all Portland Winterhawks rookies in scoring and finished eighth overall among first year WHL players with 39 points in 61 games including two goals in his regular season debut.

Hendrix Lapierre was the first overall pick by the Chicoutimi Sagueneens in 2018 and earned QMJHL Offensive Rookie of the Year honours with the second best rookie points-per-game mark with 45 points in 48 games.

Connor McClennon of the Winnipeg ICE led the 2018 World Under-17 Hockey Challenge in scoring with 11 points including eight goals in five games for Canada White earning tournament All-Star recognition.

Jake Neighbours captained Canada White at the 2018 World Under-17 Hockey Challenge and his 12 points in 16 playoff games for the Edmonton Oil Kings led all 16-year-old WHL rookies.

Cole Perfetti tied for the Saginaw Spirit lead in scoring and finished first among OHL rookies with 74 points in 63 games and was first among all first year CHL skaters with 37 goals.

Theo Rochette competed in the 2018 Hlinka Gretzky Cup in Edmonton as a member of Team Switzerland recording two assists in four games before joining the Chicoutimi Sagueneens.

Justin Sourdif helped the Vancouver Giants reach the WHL Final after finishing fourth overall in regular season rookie scoring however led all 16-year-olds in points with 46 and in goals with 23 tallied in 64 games.

Ozzy Wiesblatt recorded an impressive plus-30 rating and 55.2 faceoff percentage for the WHL champion Prince Albert Raiders after being chosen by the club in the second round of the 2017 Bantam Draft making him the only Team Canada forward not chosen in the first round.

Lukas Cormier from Sainte-Marie-de-Kent, New Brunswick, is the only Canadian player from the Maritimes and earned All-Rookie Team honours in the QMJHL for the Charlottetown Islanders.

Jamie Drysdale of the Erie Otters led all OHL rookie defencemen in scoring and wears the ‘C’ a second time for his country after captaining Canada Black at the 2018 World Under-17 Hockey Challenge.

Kaiden Guhle of the WHL champion Prince Albert Raiders was the first overall pick in the 2017 WHL Bantam Draft and Canada Red captain at the 2018 World Under-17 Hockey Challenge.

Daemon Hunt represented Canada alongside Jamie Drysdale at the 2019 IIHF World Under-18 Championship and led all 2002-born WHL rookies in scoring among defencemen for the Moose Jaw Warriors.

Ryan O’Rourke of the Soo Greyhounds shared the lead in scoring among defencemen at the 2018 World Under-17 Hockey Challenge with six points in five games as a tournament All-Star for Canada Black.

Jeremie Poirier was the second of three Saint John Sea Dogs picked in the first round of the 2018 QMJHL Entry Draft and tied for the scoring lead among defencemen at the World Under-17 Hockey Challenge on home ice.

Donovan Sebrango is the son of a former Cuban national soccer team captain and his second round selection by the Kitchener Rangers makes him the only Team Canada defenceman not chosen in the first round of their respective league draft.

Dylan Garand led all 2002-born WHL netminders with 27 games this season for the Kamloops Blazers posting the fifth best rookie goals-against-average (2.94) and save percentage (.902).

Tristan Lennox was the first goaltender chosen in the 2018 OHL Priority Selection at 26th overall to the Saginaw Spirit and is the youngest member of Team Canada and only 2021 NHL Draft prospect.

In pre-competition Saturday, Canada recorded a 4-1 victory over Slovakia with goals by Poirier, Foudy, Guhle, and Jarvis.  Foudy added an assist for a two-point performance matched by Perfetti’s two helpers.  Lennox got the start in goal stopping all five shots he faced before Garand took over for the second half stopping eight of nine attempts.  Game Summary

Canada officially opens the 2019 Hlinka Gretzky Cup against Finland on Monday, Aug. 5 at 9:30 a.m. ET/6:30 a.m. PT, followed by round-robin games Tuesday and Wednesday against Switzerland and the Czech Republic. All Team Canada tournament games will be broadcast by TSN and RDS; please check local listings for details.