Mooseheads’ Groulx back on big stage at World Junior camp 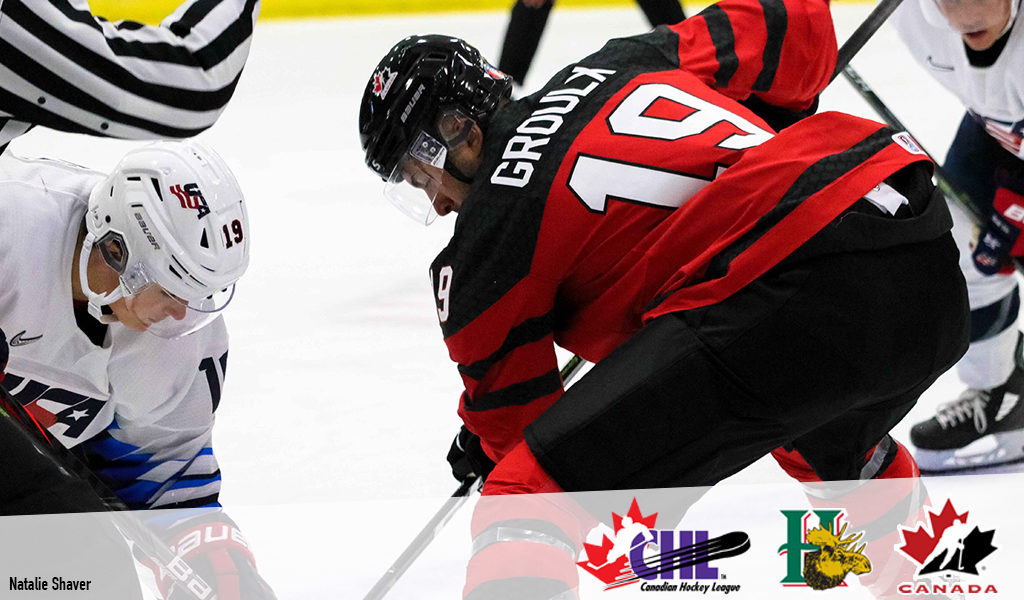 Benoit-Olivier Groulx is ready to take the next step.

The Halifax Mooseheads forward has been a constant in Hockey Canada’s Program of Excellence, with no shortage of experience on the national stage, including his past participation at the 2016 World Under-17 Hockey Challenge and the 2017 Ivan Hlinka Memorial Tournament, which he capped with a gold medal victory. Mix in a second-place finish with Team Canada at the 2016 Winter Youth Olympics and it adds up to plenty of success when playing under the national spotlight.

This week Groulx is attending the Summer Showcase in Plymouth as he auditions for a spot with the Canadian squad in December’s always anticipated World Junior Hockey Championship.

He’s one of four Mooseheads looking to make their mark in Michigan alongside goaltender Alexis Gravel, defenceman Justin Barron, and fellow forward Raphael Lavoie. Returning Team Canada defenceman Jared McIsaac was also invited but is unable to compete due to injury bringing the club’s total representation to a CHL leading five players on the national radar.

“This showcase is huge for me. It helps me to show myself a little bit more to the people who do not know me a lot, and I think I am ready for that,” Groulx told the Canadian Hockey League. “I want to show them that I can be really reliable offensively as well as defensively, and I think that’s a big part of my game. I want to tell them a little about what I am like as a hockey player.”

While Groulx notes he could be somewhat of an unknown commodity, there has been no shortage of big stage opportunities for him to put on a show before eager talent evaluators, particularly the 2019 Memorial Cup presented by Kia where he notched four points in as many games to help guide the Mooseheads to the Championship Final while also earning a spot on the Memorial Cup All-Star Team.

That performance was a continuation of his regular-season play with Halifax in which he finished with a career-high 80 points, including 31 goals and 49 assists, to come just six points shy of the team scoring lead. Though an illness cut short his playoff showing, he still managed to tally another 12 points across 10 postseason appearances and flash much of the potential the Anaheim Ducks saw in him when they called his name in the second round of the 2018 NHL Draft.

From draft day to plenty of time under the national spotlight, to say it has been a hectic year for Groulx would be an understatement.

“The past couple months has been a grind, honestly, especially being out with mono for five weeks,” detailed Groulx, the first overall selection in the 2016 QMJHL Entry Draft. “I spent a lot of time recovering from that and when I came back in for Game 3 vs. Drummondville, it was pretty hard for me to come back at my top level, but with the help of my teammates and coaches I found a way and it was great for me.”

A skillful, defensively solid talent, Groulx plays with a level of determination that makes him effective at both ends of the ice and, coupled with his demonstrated ability to raise his game in the big moments, it is those attributes that are sure to make him a truly attractive commodity as Hockey Canada’s decision makers begin piecing together their next winning lineup ahead of the coming world juniors.