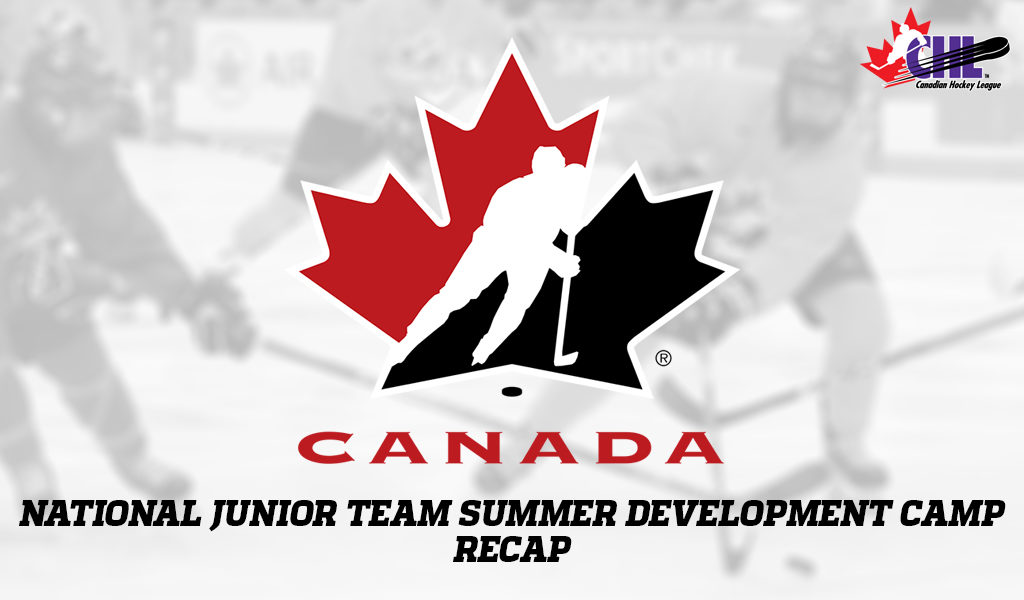 Recently selected by the Tampa Bay Lightning in the 2019 NHL Draft, forward Nolan Foote was Canada’s top camp performer as he led the way with six points, counting two goals and four assists. Foote is the son of longtime NHL blue-liner Adam Foote, who serves as his coach in Kelowna, where brother and fellow Lightning prospect Cal Foote came up through the junior ranks.

Foote was among 41 talents from across the Canadian Hockey League invited to the Summer Showcase in Plymouth, Mich., as the Hockey Canada brass continues to evaluate which players will make up its final roster for December’s World Junior Hockey Championship in Czech Republic.

For Foote, his impressive camp performance comes on the heels of his third season with the Rockets in which he finished second in team scoring at just shy of a point-per-game pace after recording 36 goals and 27 assists in 66 contests. A mainstay on the national stage, Foote’s past showings include a silver medal finish with Team Canada Black at the 2016 World U-17 Hockey Challenge as well as a gold medal victory at the 2017 Ivan Hlinka Memorial Tournament.

Following Foote was a pair of players who put up a trio of points in two games in Kirby Dach (Saskatoon Blades) and Joe Veleno (Drummondville Voltigeurs).

A native of St. Albert, Alta., Dach became the first CHL talent selected in the 2019 NHL Draft when the Chicago Blackhawks called his name at third overall. A dynamic, scoring centre, Dach has played alongside Foote on the national stage on two occasions, including a silver-medal finish with Team Canada Black at the 2016 World Junior U-17 Hockey Challenge before capturing gold at the 2017 Ivan Hlinka Memorial Tournament. After breaking in with the Blades full time in 2017-18 – in which he led all WHL rookies with 39 assists – Dach reached another gear last season as he registered 73 points in 62 games to help the Blades qualify for the playoffs for the first time since 2013. Dach was originally chosen second overall in the 2016 WHL Bantam Draft.

Veleno, who was granted exceptional status in 2015, allowing him to suit up in the QMJHL as a 15 year old, is among a group of camp participants vying to return to the Canadian squad after falling short in the 2019 IIHF World Junior Hockey Championship where he put up two assists in five games. Veleno’s extensive experience playing under the national spotlight also includes the 2015 World U-17 Hockey Challenge as part of Team Canada Black as well as the 2018 IIHF World U18 Championships. A year prior, Veleno captained Team Canada to a gold medal win at the 2017 Ivan Hlinka Memorial Tournament in which he notched a team leading seven points in five games. With the Drummondville Voltigeurs in 2018-19, the Montreal native finished third in QMJHL scoring after tallying 104 points in 59 appearances to earn a spot on the QMJHL First All-Star Team.

Between the pipes, the most impressive performance came from Peterborough Petes netminder Hunter Jones, who concluded the camp with a .957 save percentage and 1.00 goals-against average after he allowed a lone goal in 60 minutes of action while turning aside 22 total shots. This season in the OHL, Jones notched a 28-24-2-2 showing in 57 appearances, including a .902 save rate, leading to his second-round selection by the Minnesota Wild in the 2019 NHL Draft.

In all, Jones was one of five CHL netminders invited to the camp, alongside 11 defencemen and 25 forwards. The group included 16 OHL invitees, plus 13 from the QMJHL and 12 from the WHL.

The 2020 IIHF World Junior Hockey Championship begins Dec. 26, with final rosters expected to be announced in the days leading up to the tournament opener.