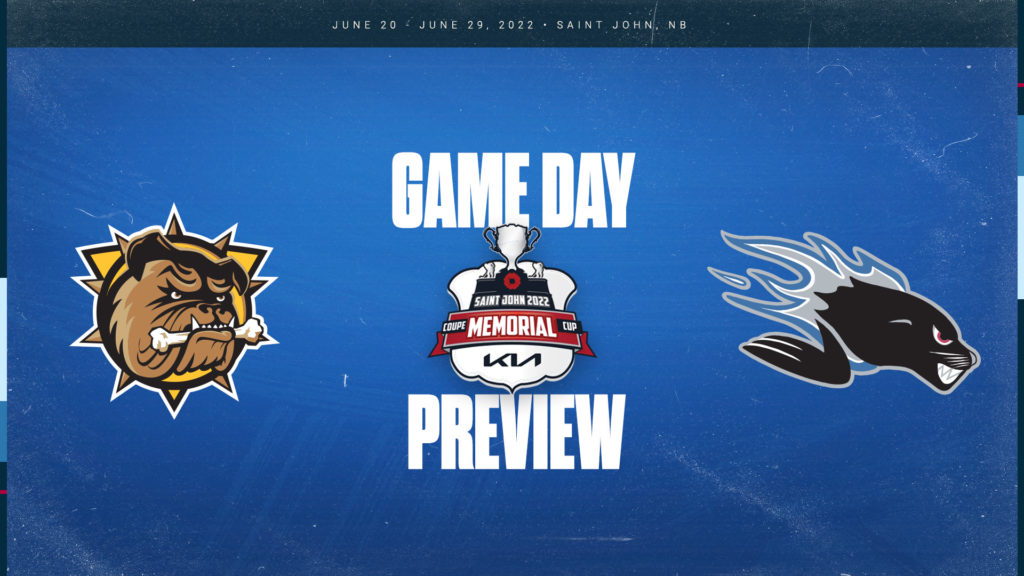 The 2022 Memorial Cup presented by Kia gets underway tonight as the host Saint John Sea Dogs face the Hamilton Bulldogs.

The Bulldogs, fresh off of the second J. Ross Robertson Cup in franchise history, enter the 2022 Memorial Cup presented by Kia on the backs of a dominant season.

Their 107 points and 51 wins both led the OHL while they recorded an impressive 22-game winning streak that carried into the playoffs. After they concluded the regular season with 10 straight wins, they swept the first three rounds of the OHL Playoffs over Peterborough, Mississauga and North Bay before beating Windsor in Game 7 to secure their spot at the tournament.

On the other hand, Saint John hasn’t played since May 12 where they lost a decisive Game 5 to Rimouski in the first round of the QMJHL Playoffs.

The defeat sparked some radical change as head coach Gordie Dwyer was replaced by University of New Brunswick bench boss Gardiner MacDougall 12 days later with the hope of fresh eyes sparking the hosts to a second Memorial Cup title.

There is currently no hotter player in the CHL than Logan Morrison. The 19-year-old claimed the Wayne Gretzky ‘99’ Award as OHL Playoffs MVP after he tallied 39 points in just 19 games.

Morrison achieved that on the back of a 100-point season as he became just the second Bulldog ever to accomplish that feat.

On the other side of the ice, William Dufour’s 56 goals led the CHL this season while his 116 points placed him third. The New York Islanders prospect also tallied 60 assists in 66 games as he led the charge on a Sea Dogs roster that won 26 of their final 28 games of the regular season.

International viewers can watch on CHLTV while fans in the U.S. can tune into NHL Network for a full game replay Tuesday at 12 p.m. ET.

Furthermore, a full game archive can be found post-game on CHLTV.

Ahead of tonight’s tournament opener, fans are encouraged to head down to Area 506 for back-to-back concerts, presented by Envision Saint John, as Zamani and Classified are set to perform at 4:15 p.m. and 5:00 p.m, respectively.

Post-game, head back to Area 506 for fireworks presented by CIBC and Day & Ross.