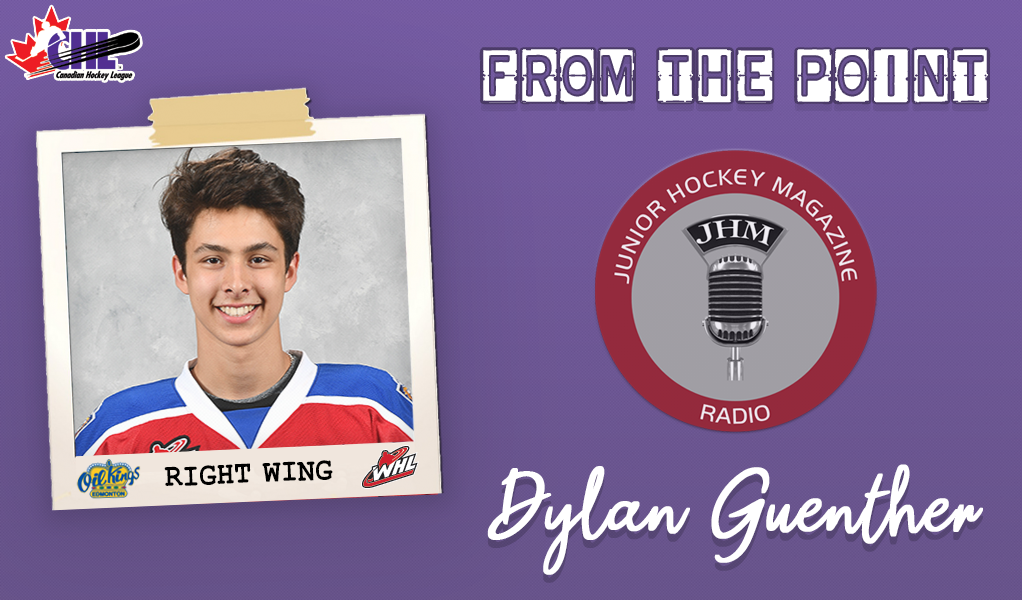 Edmonton Oil Kings sophomore forward Dylan Guenther recently sat down with Junior Hockey Magazine to discuss life away from the rink, the Western Hockey League’s Return to Play, and how he is preparing for the upcoming NHL Draft:

Junior Hockey Magazine: What was it like to finally step on the ice in a game?

Dylan Guenther: It was awesome. I was super excited. It has been a long 11 months since we were last together as a team. To finally get back on the ice as a team and play our first game was a great feeling. To come out with two wins was awesome.

JHM: What was it like being kept away from the game?

DG: It was definitely different. Usually as a hockey player, you train for the start of training camp, and with that up in the air there was a whole lot of uncertainty around it. I just had to be ready to go whenever we got the call so I was doing whatever I could to stay in the best shape possible and staying ready to go for when they said we could start playing again.

JHM: Give me a sense of what your days look like now.

DG: It is a bit different with the testing and the schooling. We come to the rink in the morning and go to school from 9 to 11 a.m. and then we get a workout in and go skate. The day is essentially the same length but usually we would be going to school in a real school with other kids and now we are learning virtually online. I think that is different. We also do testing every week to make sure we are all negative. It is a good thing to stay on top of that.

JHM: You had a great start coming back with the Oil Kings.

DG: Even during that training period, the rinks were closed here in Alberta so I wasn’t able to skate on an indoor rink for probably two months. I had to be versatile and ready to adapt to whatever I could to make sure I was continuing to get better, even when I was at home when I couldn’t skate, so it was a great feeling to get back on the ice with my teammates.

JHM: What other things did you do in order to stay in shape?

DG: I had to be able to train and continue to get better on my own with what I had at home so it was definitely something that I have never done before but I think I did a good job preparing myself for the season.

JHM: How difficult is it not having a target date for the NHL Draft in your mind?

DG: It’s a bit different. I just have to take advantage of what I have here. They have put forward a 24-game schedule for us and I have to make the most of that opportunity. I think if I play my game and if I play the right way then everything will fall into place whenever it does happen.

JHM: How would you describe your playing style?

JHM: What kind of advice has your teammate Jake Neighbours given you ahead of the NHL Draft?

DG: I think it is great to have a great friend like that who has been through it all and who can help you along the way. How he handles himself both on and off the ice is just great. He conducts himself as a pro and that is something that I am always looking to pick up off of him. I watched his interviews and I think he does a really good job. There is always something that I can pick up by watching him.

JHM: Which NHL player would you compare yourself to?

DG: I think a guy like Claude Giroux or even Jeff Carter. I think those are two guys who are super good and balanced players. Giroux can make plays and score goals in the offensive zone, and that is something I do as well. I think Carter is a good two-way player, which is something I can be. I really like the way that he plays the game.

JHM: Is there a spot in the NHL Draft that you have targeted for yourself?

DG: No. I don’t think I really put a number on anything. I am a firm believer that if I play the right way and if I stick to my game plan that everything will fall into place. I am just going to stick to that and continue to get better every single day.