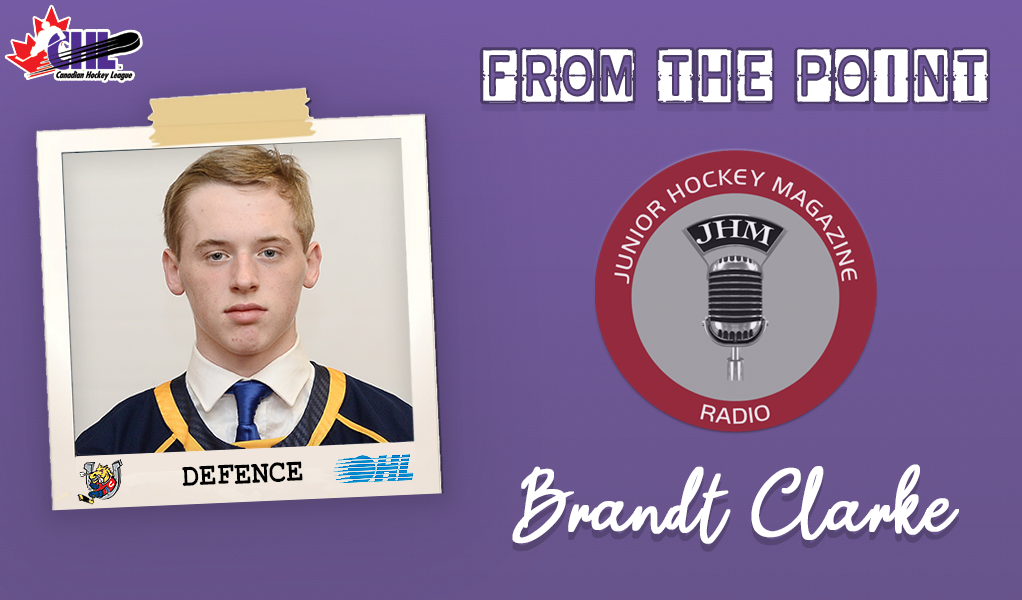 Barrie Colts defenceman Brandt Clarke recently sat down with Junior Hockey Magazine to discuss his recent opportunity to play professional hockey in Slovakia, who he likes to model his playing style after from the NHL level, and his thoughts on being selected in the upcoming NHL Draft:

Junior Hockey Magazine: What was it like playing pro games in Slovakia?

Brandt Clarke: It was great. I think it was great for my development. I got to play professional hockey for the first time. It was difficult because I joined halfway through the season and those guys were already in midseason form and they have chemistry and I just got dropped in there. It took me a couple of games to get adjusted, not only in getting back into game shape but in adjusting to pro hockey with guys who are a lot older and a lot stronger. When I started feeling comfortable and felt like I was making more plays, I think I turned it on offensively and was more well rounded, better defensively, transitioning pucks well, battling in the corners and coming out with pucks, so that was all pretty good for my confidence. I am really happy I got that opportunity because it was a lot of fun and I made a lot of good friends there.

JHM: Your brother was also in Slovakia playing with you for the first month. How special was it to be there together?

BC: It was awesome. Just having him there with me in going through those adjustment periods, it wasn’t easy but having someone going through the exact same situation, and in him being my brother, we are basically best friends, we were rooming together and we could talk about everything. It was only six games but just being able to see him across the bench and being able to pass him the puck and see him up the ice was really cool. It was upsetting when he had to leave but he had a really good opportunity in the AHL and he is doing really well for himself so I am really happy for all of his success.

JHM: What can you take away from this experience?

BC: It wasn’t a normal year, but it wasn’t a normal year for anybody. There were a couple of places I was looking at going earlier, like Sweden, but then that fell through, and the same with Finland and Germany. But once Slovakia told me and my brother that we could go there together we jumped at that opportunity. It was great development and it was great for me personally. I was halfway around the world for two months by myself after my brother left so I got to grow as a person a lot and I think that was really good for me. If I do go to the NHL in the next couple of years then I have already got the feel of being alone, having to do your own laundry, and I got that aspect out of the way. It was great for me though. I got to play pro hockey, I got to grow a lot on the ice, and I think I got to show what I can do out there against men, and off the ice too in having to grocery shop. I think I grew a lot on and off the ice.

JHM: What do you think when you hear your playing style compared to Brent Burns?

BC: It’s great. He is a Norris Trophy winner, so I will take that any day of the week. I like to compare myself to John Klingberg. He is very underrated and I think his skills and my skills are very similar. He is a good transitioner. Something I think we both do well is get shots through from the point almost every time, whether that be when we have time and take a big slap shot or when there are guys in the lane and you have to pump fake to go around them and get your shots through and create havoc at the net. I think we both do that very well. I don’t force shots and I don’t think I get shots blocked too often. I wait it out, get around the forwards if I need to, and then get a good shot on net. I think John Klingberg and I have very close intangibles in that way.

JHM: In your mind, is there a spot in the draft where you see yourself going?

BC: I obviously want to go No. 1, and if that happens, then awesome. I have the World Under-18s coming up and I think the second half of my season in Slovakia was a really good showing for me, and I think if I dominate at this tournament then I think I can go as high as the top five or top three. It’s a weird draft. A lot of people say there is no clear cut No. 1 or No. 2 or No. 3, so I think it is all going to come down to the wire and maybe team needs. Anywhere would be great. I would love the opportunity to be signed by an NHL organization. But we’ll see. I want to go No. 1, but if it is later, it is all going to be awesome so I am not too worried about it.