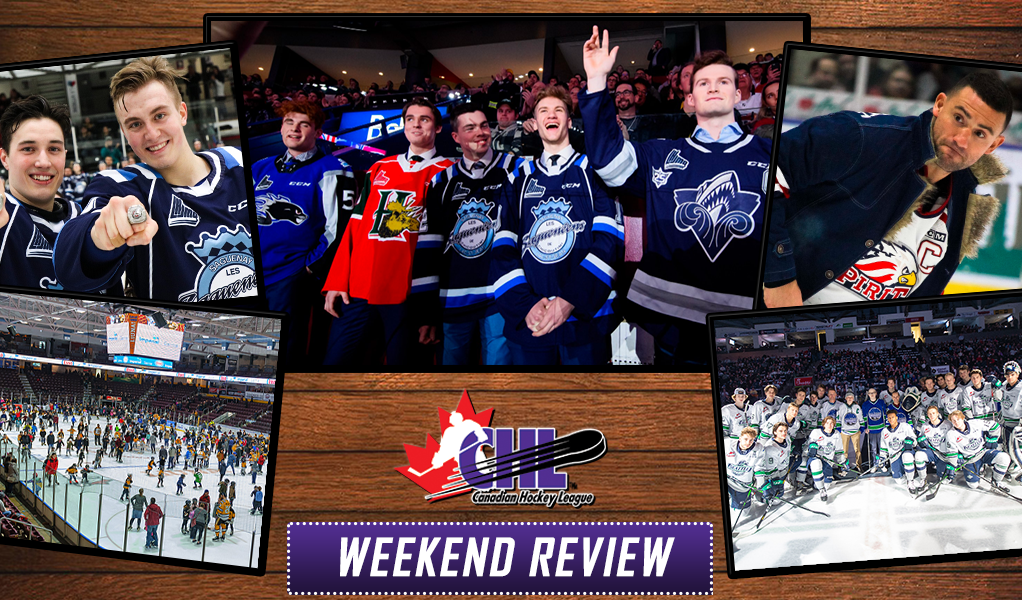 The long weekend brought fun for the whole family in communities across the Canadian Hockey League and was certainly the highlight as we cross the midway mark of February’s schedule.

Here’s a closer look at what else took place:

Lots of fun on Family Day

17 afternoon CHL games plus activities hosted by many non competing clubs gave players and teams a chance to connect with fans and their families on the holiday Monday. From pre and post-game skates, autograph sessions, and outdoor events it was a wonderful holiday in communities from coast-to-coast.

Beautiful afternoon for a #familyday skate on the oval with Wild Willie! Puck drops at 2pm today vs the @HFXMooseheads! #DefendTheDen pic.twitter.com/DyniIbk5tW

Family Day wraps up with a @HomeDepotCanada skate with the players down at the @CNCentre! pic.twitter.com/TNoHmVKUUN

Full team autograph session post game to wrap up our #FamilyDay! Thanks to all our fans who filled our house today.❤️ pic.twitter.com/9gV4zPo05G

We had a great time at @FortGeorgeNHS!

Thank you to all who joined us for our Family Day skate pic.twitter.com/jX2UT3AprZ

We’re at the @Meewasin rink for Cameco’s Family Day Skate! Come join us! Hot chocolate, coffee, and snacks are all free! pic.twitter.com/Skaw1iV088

Facing off on Family Day

Schedule makers sure had some fun planning Monday’s games in Kingston and Kelowna where the Frontenacs’ Jordan Frasca faced off against his brother Jacob who plays for the Barrie Colts. Across the country, Rockets assistant coach Vernon Fiddler got the chance to compete against his nephew Riley Fiddler-Schultz who plays for the Calgary Hitmen.

As if Valentine’s Day wasn’t special enough, the Oshawa Generals went once step further on Friday by hosting Mom’s Day. The Moms were invited down to the bench for pre-game warmup, watched the game from suite level, and were given flowers from their sons following the shootout win over the Soo Greyhounds.

If this doesn't make you smile, we don't know what will.

The QMJHL is joining stakeholders across the province this week for a special campaign that encourages young Quebecers to stay in school. The league is also recognizing its own players who have demonstrated academic perseverance and progress with the Gervais-Munger Award with recipients from each club who have demonstrated rigor, diligence, and perseverance to ensure their academic success.

As part of the 2020 Hooked on School Days, get to know the recipient of the Gervais-Munger Award for the @CBEHockey, goaltender William Grimard.@JPS_HSD | #2020HSD | #QMJHL

This weekend we saw the Flint Firebirds pay homage to the hit movie ‘Semi-Pro’ with the basketball inspired Flint Tropics designs, the Owen Sound Attack wore tie dyed jerseys in support of YMCA’s Camp Presqu’ile, and the Niagara IceDogs added plenty of hearts to their classic reds on Valentine’s Day.

All the small details taken care of here in Flint 😎 https://t.co/pH483ZjTLE

We're going to be wearing these beautiful tie dyed jerseys on Saturday for Pucks & Paddles Night in support of Camp Presqu'ile!

They'll be auctioned off after the game.

The Seattle Thunderbirds and Ronald McDonald House Charities raised an incredible $200,000 during the 22nd annual Hockey Challenge. Prior to Saturday’s T-Birds game, a full slate of action took place at ShoWare Center featuring corporate and rec league teams followed by a local celebrity and T-Birds Alumni All-Star Game with all proceeds benefiting RMHC that provides a home-away-from-home to support families while their children receive the critical medical care they need.

CHL players and teams continued the conversation about mental health with Talk Today game nights in various communities in partnership with the Canadian Mental Health Association and local branches.

The #TalkToday campaign aims to combat stigma by starting a conversation around mental health and encouraging young people to seek help when they need it.

Don't be afraid to ask for help. pic.twitter.com/nV7IC3XfSa

As part of the sixth annual #TalkToday, presented by @TeachersLifeCAN, tonight we welcomed Helen Fishburn (Executive Director of @CMHAWW) for our ceremonial puck drop.

It was a special night on Saturday in Rouyn-Noranda when the Huskies welcomed the visiting Sagueneens that now feature former captain Rafael Harvey-Pinard and Felix Bibeau who helped the club capture the Memorial Cup last May. There were video tributes, a ceremonial face-off, and of course the presentation of the championship rings.

The Top 5 #QMJHL prospects ahead of the 2020 #NHLDraft, as well as members of Team Canada's #WorldJuniors gold-medal squad, met with the media and were presented to the Bell Centre crowd during yesterday’s @CanadiensMTL game!

A few 2020 World Junior Hockey Championship gold medalists from @HockeyCanada are with us tonight! Welcome!#GoHabsGo pic.twitter.com/ryQk6N5z4S

The top #QMJHL prospects of the 2020 #NHLDraft met with the Montreal media at the Bell Centre this past Monday.

Along with our gold medalists from the latest #WorldJuniors, they then received an ovation from the @CanadiensMTL crowd!

Here's a quick recap of their evening. 📽️ pic.twitter.com/uJgW4oKj1n

Quebec City was host of the 19th stop on the 2019-20 Rogers Hometown Hockey Tour. Scheduled to coincide with Carnaval of Quebec and the world’s greatest minor hockey tournament, viewers were treated to a wide range of stories from La Belle Province. Guests included Manon Rheaume who was the first female goaltender to play in the QMJHL (Trois-Rivieres) and the NHL (Tampa Bay Lightning), as well as former Oshawa Generals great Eric Lindros who was the first overall pick by the Nordiques in the 1991 NHL Entry Draft.

Thank you for the invitation to a beautiful city to celebrate the @tournoipeewee and meet hockey fans from around the world. Best of luck to all kids playing the best game in the world in my favourite Pee Wee tournament. pic.twitter.com/JJk6fuDRXN

For 60 years, the Quebec International Pee-Wee Hockey Tournament has meant as much to the kids who suited up for it as its home city.

Just ask the ones who went on to play in the NHL.

When Cole Perfetti isn’t busy chasing a CHL scoring title or preparing for early selection at the 2020 NHL Draft, chances are he’s spending time with his friends from Covenant HealthCare in Saginaw. The video below offers a glimpse at how the Spirit top scorer is a special role model for young patients and fans.

Some of @ColePerfetti91’s new friends from @CovenantSaginaw were at the Dow Event Center this weekend and had the opportunity to meet up with Cole after the game on the ice! #FettsFriends pic.twitter.com/868rlYqqPv

Saginaw welcomed back former Spirit captain Paul Bissonnette to The Dow on Friday night. The now retired Arizona Coyotes forward has turned into one of hockey’s most popular media figures and social media follows @BizNasty2Point0. Also seen around the rinks this weekend was Rich Peverley for his annual Pevs Protects game in Guelph with the Heart and Stroke Foundation. And in Vancouver, stickhandling specialist Pavel Barber graced the Giants ice showcasing his stuff during the intermission, plus former Bachelor star Mykenna Dorn accepted a Red Deer Rebels invitation to attend a game.

NOT A BIG DEAL

Last night, we welcomed former Spirit Captain @BizNasty2point0 back to the @DowEventCenter!#SoarWithUs

Go and check out their table at Gate 6! #GUEvsOS pic.twitter.com/iT9oGphvFx

My girlfriend signed me up for the intermission game today 😂. Thanks honey appreciate it.
. @WHLGiants @TheWHL pic.twitter.com/RSKYi39D7C

Good games boys!! Thanks for the support on my journey! Was fun to cheer you guys on! @Rebelshockey https://t.co/HInejg0Bpu

Presenting your 2020 Class of Don Brankley @LondonKnights Hall of Famers!

History made on QMJHL lines

Daniel Bechard called it a career after 25 years and becoming the QMJHL’s first linesman to reach the 1,000 game milestone.

Congratulations to Mr. Daniel Béchard who became the first linesman in #QMJHL history to reach the 1000 regular season games' milestone!

Following today's historical game and after a 25-year career, Béchard will be retiring.
Thank you for everything Daniel! 👏

World Junior gold medalist and Akil Thomas of the Peterborough Petes joined exclusive company on Saturday with his 300th career OHL point. The Los Angeles Kings prospect and former Niagara IceDogs captain met the mark with an assist in his 234th game and also has 100 career goals to his credit.

Congrats @AkilThomas2!@LAKings prospect of @PetesOHLhockey recorded his 300th career #OHL point with three assists in a win on Saturday.

Congratulations to @Jeff_Durocher who played his 300th game in the @QMJHL on Wednesday night! Join us tonight as we honor him with a pregame presentation. #SeaDogs15 pic.twitter.com/HIgV6W5Jbl

2020 NHL Draft prospect William Villeneuve of the Saint John Sea Dogs has already set a new franchise record for points in a season by a defenceman with 54, while Sherbrooke Phoenix forward Alex-Olivier Voyer’s 39 goals is also a single season record. A pair of rookies also set new team benchmarks over the weekend including Brennan Othmann of the Flint Firebirds now with 30 points on the season, and Jacob Dion of the Drummondville Voltigeurs whose 13 goals by a are now the most by any first year defenceman in team history.

Another day another record for @WilliamVillene9 With 3 assists today William takes the franchise lead for most points by a defenceman in a single season – 54! #SeaDogs15 pic.twitter.com/9e0P3UA7A7

No Firebird has recorded more goals or points in their rookie season than @BOthmann78…and we still have 14 more games to go 😯 #ThisIsFlint | #GatewayToTheNHL pic.twitter.com/lPS8b21tU4

Foudy goes back for more

Just days after making his NHL debut with the Columbus Blue Jackets, London Knights co-captain Liam Foudy was once again recalled under emergency circumstances and produced a point despite Thursday’s 4-3 overtime loss to the Buffalo Sabres.

Fun first couple of NHL games!Dream come true! Thanks Columbus for the opportunity and support. pic.twitter.com/fWs8LM3WsW

Jason Robertson, who led the CHL in scoring last season with 117 points in 62 games split between the Kingston Frontenacs and Niagara IceDogs, made his NHL debut with the Dallas Stars on Thursday night in Toronto. The second round pick from the 2017 draft, who has 35 points in 49 AHL games in Texas, even picked up an assist in the club’s 3-2 victory over the Maple Leafs.

If you want to see someone who just enjoyed their first game in the @NHL, then check out this @JasonRob1999 post-game interview. #DALvsTOR | #GoStars pic.twitter.com/ysON9ttfI8

Play your first @NHL game, get your first NHL point, say hi to mom and dad.

The NHL trade deadline is fast approaching and a pair of CHL talents have already been involved in a pair of blockbuster deals. Tampa Bay Lightning first round Nolan Foote of the Kelowna Rockets was traded to the New Jersey Devils in exchange for Blake Coleman, while Pittsburgh Penguins 2018 second round pick Calen Addison of the Lethbridge Hurricanes was traded to the Minnesota Wild for Jason Zucker. Both WHL players helped Canada win gold at the 2020 IIHF World Junior Championship.

TRADE ALERT: The #NJDevils have acquired Nolan Foote and a first-round pick from Tampa Bay, in exchange for Blake Coleman.https://t.co/SjslAGr1Bg

NEWS: The #mnwild announced the club has acquired left wing Alex Galchenyuk, defenseman Calen Addison and a conditional first round selection in the 2020 NHL Entry Draft from the Pittsburgh Penguins in exchange for left wing Jason Zucker.

While 12 teams may have an ‘x’ next to their name in the standings, the Sherbrooke Phoenix are the only club with the distinctive ‘y’ which is symbolic of a divisional title. The QMJHL’s Central Division champions, the Phoenix will raise the banner for the first time since joining the league in 2012-13.