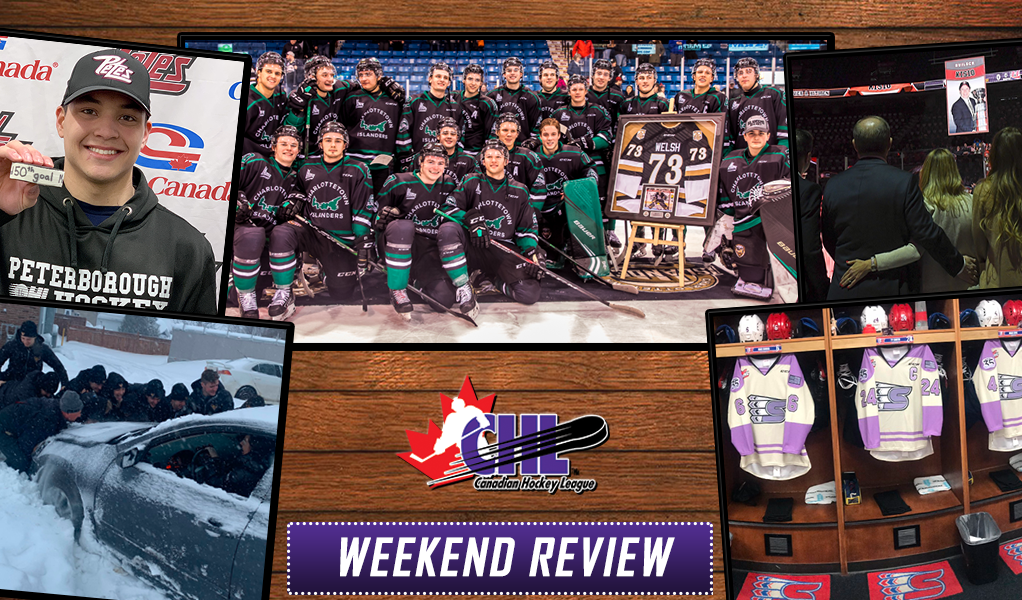 The calendar changing from February to March means just three more weeks until the Canadian Hockey League playoffs. It’s also the time of year where teams put together some of their final promotions amidst their playoff pushes, and many different milestones are met as some of the league’s top individual performers set new standards.

Here’s a closer look at everything you may have missed:

Matthew Welsh of the Charlottetown Islanders is in a league of his own setting a new QMJHL mark for most minutes played. The overage netminder set the record on Friday night surpassing former PEI Rocket netminder Ryan Mior whose total stood at 12,933:20. Following Sunday’s victory, Welsh has eclipsed the 13,000 minutes mark between-the-pipes in his 222nd game. He also now has 124 wins to his credit, all accumulated with the Islanders since 2015-16.

Matthew Welsh has set the QMJHL record for most minutes played by a goaltender in a career! pic.twitter.com/dJtkz4fewm

"He's done so much on and off the ice for this community, it was a terrific celebration tonight and it was fitting." – Jim Hulton

More from the Eastlink Centre on a historic, memorable night for Matthew Welsh.

Toronto Maple Leafs second round pick Nick Robertson of the Peterborough Petes became the league’s first 50 goal scorer achieving the milestone in style on Sunday with a hat-trick in his 43rd game of the season. He’s the first Petes player to meet the mark since both Jason Dawe and Mike Harding pulled it off in 1992-93.

5⃣0⃣ GOALS IN 4⃣3⃣ GAMES@nickrob2001 scores shorthanded, for the hat-trick, to become the first Pete in 27 years to score 50 goals in a season!#GoPetesGo | #LeafsForever pic.twitter.com/JJNSwzJTA7

Kisio is Forever A Hitmen

A ceremony was held on Sunday in Calgary honouring Kelly Kisio for his contributions to the Hitmen as an executive and a coach. The celebration and banner raising, all part of the club’s 25th anniversary season, recognizes his nearly two decades with the club from 1998 until 2016. Under Kisio’s leadership, the Hitmen earned 763 regular season wins and captured the Ed Chynoweth Cup twice in 1999 and 2010.

'Forever A Hitmen'
The Kisio Family watching the banner raise in Scotiabank Saddledoome.

Hurricanes add to Wall of Honour

The Lethbridge Hurricanes held a special pre-game ceremony on Saturday inducting alumni Byron Ritchie and Shane Peacock into the club’s Wall of Honour. Ritchie played four WHL seasons with the club from 1993-97 recording 126 points during his final season which helped the Canes hoist the Ed Chynoweth Cup. Peacock played five seasons from 1989-94 appearing in 336 career games with an impressive 366 points which includes his 102-point campaign in 1992-93 that stands as the club’s single season record by a defenceman.

Join us tonight for a special pre-game ceremony as we induct #WHLCanesAlumni @Byronritchie93 and Shane Peacock into the Hurricanes Wall of Honour presented by Kirk’s Tirecraft! Ritchie and Peacock will also be signing autographs after the game. #WHLCanes #YQL pic.twitter.com/qkbDtQ6C2v

Player’s Night on the Island

Matthew Welsh’s record night was also part of a special promotion in Charlottetown where the Islanders players worked together to design a jersey that honoured the history of hockey on Prince Edward Island. The most unique element of the design were nicknames stitched on the back in place of last names inspired by Major League Baseball’s annual Player’s Weekend.

Have a look at the jerseys we'll be wearing on Friday night, and a sneak peak at the nicknames! pic.twitter.com/JCLrbpx0gl

The Chiefs and Americans both hosted Breast Cancer Awareness games over the weekend with the former supporting the cause with special sweaters, and the latter painting their ice pink for the occasion.

There’s still plenty of snow in the air and on the ground, especially in Quebec, as evidenced by these social media shots from the Gatineau Olympiques and Victoriaville Tigres who despite the cold provided heart warming gestures for stranded vehicles in need of a push.

Alex-Olivier Voyer of the Sherbrooke Phoenix recently launched a local initiative to support his community by inviting fans to donate new or gently used sports equipment. The gear was collected at the rink and fans who contributed received a free ticket to see the Phoenix. The program was in support of the David Perron Foundation that helps youth in the region.

The Ottawa 67’s had their first ever Punjabi Night and Punjabi Telecast accompanied by a one of a kind networking event attended by over 700 tech students in the nation’s capital. The game, complete with fan reaction and highlights, was part of a feature segment on Saturday’s Hockey Night Punjabi broadcast.

.@Ottawa67sHockey won more than just a hockey game last night! @AmritG takes a look at how the organization is helping grow the game. pic.twitter.com/7p1HjkxFs2

Not Your Ordinary Games

A couple of unique takes on a classic CHL promotion took place in Edmonton and Ottawa last Tuesday morning. The Oil Kings Hockey Hooky Game showcased some creative designs from young fans as part of the team’s game presentation, while the 67’s offered free tickets for their AM puck drop.

Want to see more of these incredible headshots from today's Hockey Hooky game? You can find them all here ➡️ https://t.co/A2mu1u0gsK pic.twitter.com/NsFyITL0CP

Did you hear? Come out on Tuesday and watch your #67s at zero cost!#NoQuit | 🎟️: https://t.co/4lKtnSTfW9 pic.twitter.com/D03xuu1kqZ

A family friendly photo opportunity was captured in Shawinigan on Friday when Coulombe brothers, Antoine of the Cataractes, and Olivier of the visiting Acadie-Bathurst Titan, met for the second time this season. The pair weren’t the only brothers to go head-to-head over the weekend as Sportsnet’s Saturday afternoon game showcased Clarke brothers Graeme and Brandt of the Ottawa 67’s and Barrie Colts.

The Seattle Thunderbirds Community Sports Foundation proudly announced that over $1 million has been awarded to local youth sports teams, schools, and associations since the Foundation’s inception in 2009. 50/50 raffles at every T-Birds home game is a primary contributor to the non-profit that believes all youth should have access to community sports.

Throughout the month of February, CHL teams have activated their partnerships with Canadian Mental Health Association branches at home games as part of the Talk Today program continuing to raise awareness and funds for mental health services from coast-to-coast.

Tonight, we support @CMHA_Victoria in promoting mental health awareness. Come on down, lend your support, and share pictures of the game with the hashtag #TalkToday! pic.twitter.com/FCsaTjfChH

Thanks to @CMHAWW,@TeachersLifeCAN and fans for making our annual #TalkToday event a success! You’re all helping to make positive #mentalhealth a part of our community! #TalkToday pic.twitter.com/eJasmFITXz

One in five youth struggle with #mentalhealth issues. It’s time to #TalkToday about mental health. Join us tonight at the Brandt Centre with @CMHARegina! pic.twitter.com/TXkmuQiMTS

History was made tonight in Flint, Michigan.@shane_wright51 past Bernie Nicholls for the all-time rookie goals lead in Kingston's franchise history.

Shane will be the first person to credit his teammates for the amazing accomplishment.

With a 1st period hat trick, Dylan Guenther gives your #OilKings a 4-0 lead AND breaks the record for most goals by a rookie in modern franchise history (25)!!! #gunsablazin pic.twitter.com/g63wiUz6bk

With today's win, Brett Brochu has broken the franchise record for most wins by a rookie goaltender!Congratulations Brett! pic.twitter.com/qjgtjdDqPF

Felix Robert set a new Sherbrooke Phoenix single season points record with 89, while Ty Smith of the Spokane Chiefs broke his own franchise single game points record by a defenceman with eight. Behind the bench, Patrick Roy of the Quebec Remparts became just the 10th QMJHL coach to win 400 career games. The Phoenix became the first club from coast-to-coast to 100 points which is also a franchise first, while the Moncton Wildcats set a franchise record with their 15th straight win. At the gates, the Rimouski Oceanic hit the 100,000 fans mark this season and the Saint John Sea Dogs celebrate 2 million all-time attendees.

🎥 Ty Smith is very good at hockey. He also sports a mean mustache. Not sure if that's relevant or not.

Here is the @NJDevils prospec after his record-breaking performance on Friday night!#GoChiefsGo pic.twitter.com/dQ1fYNWGZq

We recently surpassed 2 MILLION fans who have attended a Saint John Sea Dogs home game in our 15 year history! #SeaDogs15

Thank you Saint John for your continued support and making us YOUR TEAM!

We invite all 2 million of you to join us for our home games this weekend! #QMJHL pic.twitter.com/aCLdv5IG6H

Add another trio to the CHL’s 300 career games club including Conner McDonald of the Kelowna Rockets, Macauley Carson of the Sudbury Wolves, and Christian Huntley of the Moncton Wildcats.

Another milestone for CMAC! He played in @TheWHL game number 300 tonight. pic.twitter.com/782G0amK6L

🚨🚨 @macauleycarsonn hits the ice for his 300th #OHL career game! 👊 He looks to tie the franchise record of 301 games played in a Wolves uniform Sunday! 🏒 #congrats 🎉 pic.twitter.com/l93p1RMn53

The Ottawa 67’s became the CHL’s second club to add a y next to their x by locking up the OHL’s East Division title for the second straight season and 17th time since 1975-76.