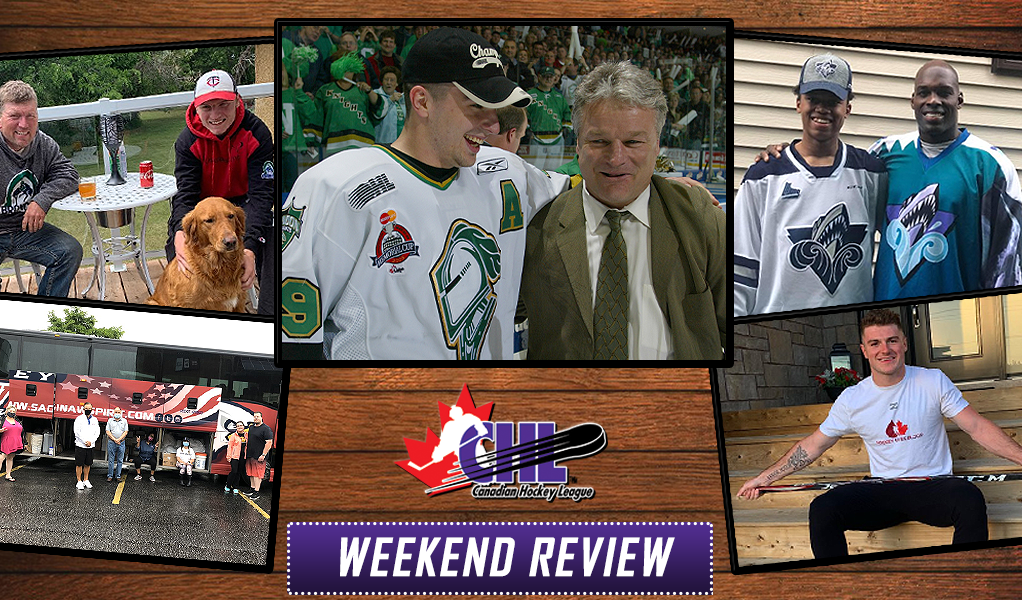 The weekend’s highlight was Father’s Day and that’s exactly where we begin our latest recap of news and notes from around the Canadian Hockey league.

Here’s a look at that story and more:

The CHL and many of its member teams took time Sunday to wish everyone a Happy Father’s Day with special recognition for hockey dads and billet dads from coast-to-coast. The CHL’s social thread below features videos from Christian Propp of the Kingston Frontenacs, a Saskatoon Blades dressing room clip with captain Chase Wouters’ dad Scott, and a photo of 2020 Rimouski Oceanic draft pick Loik Miville and his father Francois who was selected by the team back in 1998. Other teams got creative further down the thread by posting photos of their players and dads, and some video messages of thanks.

We salute everyone across the #CHL family for all of the driveway practices and fun times spent playing the game we love.

For motivating us to be our best.

The smiles on the dads of some of our 2020 Drafted players says it all. Happy Father’s Day to all the dad’s out there who continue to be our number 👆fans…it just so happens that we feel the same about you 💙#HappyFathersDay2020 pic.twitter.com/1YzYaREt25

Happy Father's Day to all the dads, billet dads and father figures from the Swift Current Broncos! #FathersDay pic.twitter.com/o3mgilMzBG

Happy Father’s Day to all of the great hockey dads out there! 🐟 pic.twitter.com/SIKZBvZH9X

One more round of #FathersDay shots before the day is done.

Hope you all had an amazing day! pic.twitter.com/VyHDxTyCxh

To all the Dad’s and Father figures—we appreciate you, we love you and thank you for everything you do!

To all the Fathers, Grandfathers and Father figures, Happy Fathers Day from the Portland Winterhawks! pic.twitter.com/rUOXJb4EDh

The Ottawa 67’s introduced a new web video segment titled Between Two Barber Poles and used the first episode to feature goaltender Cedrick Andree and his father Frank just in time for the weekend.

Welcome to the first episode of Between Two Barber Poles – Father's Day Edition.👔

We got the chance to sit down with Ceddy and his dad Frank! |📽️: https://t.co/qy0GUzoF8B pic.twitter.com/AwUub0a8Ae

NEWS | The road to the #WorldJuniors (@HC_WJC) continues July 27-31 when 41 players meet online for the @SportChek summer development camp.

The United States National Junior Team will converge in Plymouth, Michigan, for a Summer Showcase to evaluate their own talent ahead of the World Juniors. Five CHL players are among the 43 total invites including Dustin Wolf of the Everett Silvertips and Arthur Kaliyev of the Hamilton Bulldogs who both represented their county last season in the Czech Republic.

43 players have been invited to the 2020 World Junior Summer Showcase at @USAHockeyArena. #WJSS 🇺🇸

Simon Knak of the Portland Winterhawks is the only returning member of the four CHL players invited to Switzerland’s summer camp for World Juniors. The other hopefuls include Inaki Baragano (Kamloops Blazers), Giancarlo Chanton (Niagara IceDogs), and Noah Delemont (Acadie-Bathurst Titan).

Simon Knak of the @pdxwinterhawks & @IBaragano of @blazerhockey have been invited to Team Switzerland’s U20 National Junior Team Summer Camp!

The IIHF assigned hosts and announced dates for several world championship events for the 2020-21 season including the under-18 category which will take place April 15-25, 2021, in Plymouth. The event returns to USA Hockey Arena where it was scheduled to take place in 2020 before its cancellation due to the pandemic.

The IIHF has assigned the tournaments for the upcoming season. We return to many venues of tournaments cancelled this spring with the #WomensWorlds in Canada, #U18Worlds in the U.S. The U18 Women's Worlds go to Sweden. Women's Olympic Qualification set. https://t.co/L2HMbN8Mwn

Bauer, one of the CHL’s proud equipment suppliers, is excited to introduce some new Personal Protective Equipment to help us all stay safe as we continue to return to more frequent social and public gatherings.. These products include the Integrated Cap Shield, which can be worn over a baseball cap or alone, and Reversible Fabric Masks, which cover the nose and mouth, to provide a comfortable option where face coverings are recommended or required.

Protecting hockey players has been our mission for decades, and in response to the challenges created by COVID-19, we have taken learnings from our medical-grade face shields to design products which will keep our community safe both on and off the ice. pic.twitter.com/jEoglOAk7r

In February Mathieu and hundreds of other kids in Winnipeg entered a Goalie Mask Design Contest with @RealCdnSS and this morning we got to see the big unveiling of his winning design! Congrats Mathieu, we can’t wait to see the goalie helmet in action! pic.twitter.com/hYdYj8uLtS

The Kitchener Rangers have announced the launch of a new Community Fund called Rangers Reach. The independent, non-profit organization, will work at arms length from the hockey club with a focus on supporting the community. The fund will coordinate community support and donations previously managed by the business operations side of the team which includes over $15 million since 2002.

We're pleased to announce our commitment to the community that has supported Kitchener Rangers hockey since 1963. https://t.co/A0Cbb4Krw0 #commYOUnity @OHLRangers

The Saginaw Spirit partnered with the United Way of Saginaw County and several local business and organizations for two Fill the Bus events to benefit Saginaw County flood victims. An estimated $30,000 was collected for those in need.

The Spirit want to send a heartfelt thank you to all of the businesses and non-profits involved in the “Fill the Bus” event last week. It was a BIG success as we brought in an estimated $30,000 in monetary, gift card, and supply donations. THANK YOU!! pic.twitter.com/k80BPSSJ8W

The Bulldogs’ Foundation is donating $5,000 to Hamilton Food Share to continue supporting the fight against food insecurity as a result of the COVID-19 pandemic. The Bulldogs’ Foundation, ATS Healthcare and the Andlauer family donated $100,000 to Hamilton Food Share in early April when COVID-19 had shut down the city and province.

QMJHL prospects continue to receive special deliveries from around the league since first hearing their names called during the league’s 2020 Entry Draft held June 5-6. The Charlottetown Islanders, Rouyn-Noranda Huskies, and Sherbooke Phoenix were among the latest clubs to share photos of their new players and their families celebrating the next step in their hockey careers.

More Draft Kits are finding their way to our newest prospects – Check out 2nd round pick Sam Oliver in his gear! pic.twitter.com/bd5ywnfvSb

A search through social media to see CHL stars staying active at home finds a Peterborough Petes online gaming tournament between Shawn Spearing and Tye Austin, Logan Nijhoff of the Regina Pats thanking those on the front lines, and Jacob Rabouin of the Sherbrooke Phoenix in motocross action.

Yesterday @SpearingShawn took a 4-1 lead over @tye32austin and was already asking about a mercy rule. How far do you think Shawn will go in this tournament?

Stick tap to all those putting it on the line from @LoganNijhoff! #ThankYou pic.twitter.com/mhVuY7Jxei

Honoured to announce my partnership with @hkygivesblood as a player ambassador. A crash victim can use up to 50 units of blood to save their life. Learn how to book your appointment at https://t.co/b2sNWZSNSw@KingstonFronts @ohlofficial @chlhockey @canadaslifeline pic.twitter.com/DetnYbQBs8

Super excited to be teaming up with @hkygivesblood as a player ambassador. Each year @canadaslifeline needs 112,000 new donors and someone battling leukemia can use up to 8 units of blood per week. I encourage all to do their best to donate. @CHLHockey @OHLBarrieColts @OHLHockey pic.twitter.com/Wcqedvjijg

I’m proud to announce that I’m teaming up with @hkygivesblood as a player ambassador. Every 60 seconds in Canada someone needs blood. A crash victim can use up to 50 units of blood to save their life. @blazerhockey @TheWHL @CHLHockey @CanadasLifeline @hkygivesblood pic.twitter.com/UISSDF22QP

I am very grateful for the opportunity to be a helping hand in my community and support @CanadasLifeline.@hkygivesblood @HFXMooseheads@QMJHL @CHLHockey pic.twitter.com/398lsTJv90

As a member of the @Kelowna_Rockets I am proud to become a @hkygivesblood player ambassador.
Half of all Canadians will need blood or knows someone who will.
Book today or learn more at https://t.co/pbRSrTjvwd@CanadasLifeline @Kelowna_Rockets @TheWHL @CHLHockey pic.twitter.com/xFlDIYPswB

I am proud to become a @hkygivesblood player ambassador to help create awareness about the need for blood and blood components such as plasma. The need for plasma is 4 times greater then what is currently donated in Canada. Book today at https://t.co/i8VgPSRYmT @Sudbury_Wolves pic.twitter.com/wgwS6dXNFv

The Sport-Etudes Foundation announced a list of 68 student athletes recognized for their excellence in the classroom and in various sports. 19 QMJHL players were among those who each received bursaries of $1,250 including Rafael Harvey-Pinard who was named the league’s Scholastic Player of the Year.

The Saint John Sea Dogs recently introduced Greg Gilbert as the team’s new head coach. A three-time Stanley Cup champion as a player with the New York Islanders and Rangers, the 58-year-old from Mississauga has 20 years of head coaching experience across all levels. He last coached in the CHL for the Saginaw Spirit in 2015-16 and won OHL Coach of the Year honours back in 2012. Gilbert is the eighth head coach in franchise history and will take over head coaching duties from interim head coach, Jeff Cowan.

Gilbert, a former 3-time Stanley Cup champion as a player, has 20 years of Head Coaching experience, across the @NHL @TheAHL & @OHLHockey. He has won #AHL & #OHL Coach of the Year.

The Moncton Wildcats are pleased to announce that Daniel Lacroix will be returning as head coach for the upcoming season and Ritchie Thibeau, who has been interim director of hockey operations, is moving into the role in a full-time, permanent capacity. Lacroix took over as head coach in December and guided the team to a record of 26 wins and 6 losses over 31 games. Thibeau became assistant director of hockey of operations and head scout for the team back in 2016.

The Wildcats are pleased to announce that Dan Lacroix will be returning as head coach for the upcoming season!

Also, Ritchie Thibeau, who has been interim director of hockey ops, is moving into the role in a full-time, permanent capacity.

Scott Walford of the Saskatoon Blades is the latest member of the CHL’s 2020 class of overage graduates who will continue his hockey and education in U SPORTS while taking advantage of the league’s scholarship program. The former Montreal Canadiens third round pick has officially committed to McGill University.

McGill Hockey welcomes Scott Walford 🔴⚪️
Scott is a defensemen from Coquitlam B.C.
Scott played in the WHL (@TheWHL) for 5 seasons for the Saskatoon Blades (@BladesHockey) and Victoria Royals (@victoriaroyals).
He… https://t.co/FAl6YEj1i0