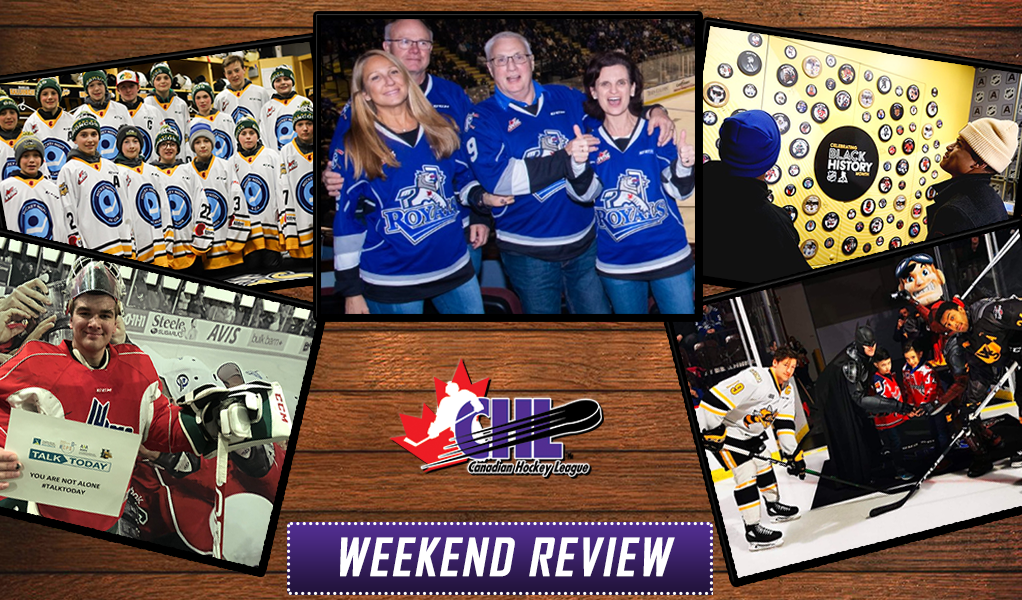 From player movement both up and down, to theme nights, honouring the past, and sharing February festivities with family, it’s been a busy week across the Canadian Hockey League.

Here’s a closer look at the latest:

The rule allows Foudy to play a maximum five games in the NHL this season while he must also be returned to his junior club prior to London’s next game Tuesday versus Guelph.

Foudy was originally selected 18th overall by Columbus in the 2018 NHL Draft.

Co-Captain Liam Foudy (@foudshow) has been called up by the @BlueJacketsNHL on an emergency basis!

He will make his @NHL debut tomorrow against the @TBLightning 🏒 pic.twitter.com/k1cUKRulDg

The Saginaw Spirit have received a big boost after defenceman Bode Wilde was returned to the club Monday after spending much of the season with the Bridgeport Sound Tigers, the top minor-league affiliate of the New York Islanders.

Through 62 appearances with the Spirit last season, Wilde recorded 19 goals and 51 assists for 71 points to rank third among OHL defencemen. Wilde was a second-round draft selection by the Islanders in 2018.

CHL clubs are doing their part to help raise mental health awareness in partnership with the Canadian Mental Health Association and the league’s#TalkToday initiative through a series of game nights throughout February. The program provides an important opportunity to address the mental health needs of athletes across Canada and works to end the stigma around mental illness. Since 2014, more than 2,400 CHL players have taken part in mental health education programs.

1 in 5 youth struggle with #mentalhealth issues. It’s time to #TalkToday about mental health. Join us! pic.twitter.com/sUP5jnJZ6C

#TalkToday provides #MentalHealth support and raises suicide awareness among our community and throughout the #WHL – we are proud to partner with @CmhaLethbridge for tonight's game and hope to see you there.

1 in 5 youth struggle with #MentalHealth issues.
It’s time to #TalkToday about mental health.

Join us & @TeachersLifeCAN at tonight's game as we keep the conversation going! pic.twitter.com/bhJxiPlVIN

Prior to puck drop Sunday versus the Chicago Blackhawks, the Winnipeg Jets held a ceremonial faceoff for hometown hero Joel Hofer, the Portland Winterhawks netminder who came up big between the pipes for Team Canada at the 2020 IIHF World Junior Championship en route to an 18th gold medal win. Making the moment extra special was Blackhawks captain Jonathan Toews, a fellow Winnipegger, took the ceremonial draw for the visiting squad.

The @NHLJets honoured Winnipeg native, and current @pdxwinterhawks goaltender, Joel Hofer on his World Junior gold before the game. 🤗 pic.twitter.com/05bWTtGFUE

Two WHL squads paid tribute to their past beginning with the Spokane Chiefs who honoured seven members of the 1970 Spokane Jets, the first U.S.-based team to win the Allan Cup, awarded annually to the senior amateur men’s hockey champion.

Elsewhere, the Moose Jaw Warriors inducted three alumni into the club’s Legends Hall of Fame, including former players Chris Armstrong and Harlan Anderson as well as Lorne Humphreys who was added in the builder category.

A puck drop to remember here as seven members of the 1970 Spokane Jets break the seal on tonight’s action! pic.twitter.com/HbYPuSbtPv

A trio of CHL clubs were the latest to help make cancer beatable in hosting theme nights including Pink in the Rink which saw the Soo Greyhounds as well as the ICE sport pink stylized jerseys while fans in attendance were also invited to wear pink to help support the cause. Meanwhile, the Regina Pats dedicated Saturday’s contest to breast cancer awareness in support of cancer patients throughout southern Saskatchewan.

PINK THE RINK was FUN!!

There's no Monday morning blahs for us. We're still smil'n from the support at Saturday Nights @WHLPats Breast Cancer Awareness Game. Thank you to the Pats & every member of the Pats Regiment for supporting cancer patients in southern Saskatchewan. #strongertogether @SaskCancer pic.twitter.com/OLWX3Sd2EA

Theme nights continued across the OHL where the Windsor Spitfires held Superhero Night where the home squad dressed in special edition Batman-themed jerseys, a night that sees a portion of ticket proceeds donated to the Fight Like Mason Foundation, a local organization that strives to improve treatment, care, quality of life, and awareness surrounding childhood cancers.

Two WHL squads are the latest to suit up in unique Hockey Night in Canada theme jerseys in support of the Kidney Foundation of Canada. Extra special for the Wheat Kings was the sweater included the name of Logan Boulet on the inside collar, in recognition of one of the victims of the Humboldt Broncos bus crash whose billet brother currently skates with the Humboldt Broncos peewee AA team.

A very special start to our game day. Humboldt Broncos Peewee AA team just toured our locker room and broke in our @HNIC jerseys complete w/ "The Logan Boulet Effect" on the inside collars. One of the team members was the billet brother of Boulet during his time in Humboldt 💚💛 pic.twitter.com/kszFPnH1pH

Petes Make Hockey for Everyone

Hockey is for Everyone was the theme on Thursday in Peterborough where among the Petes’ special guests were members of the Curve Lake First Nation who performed ‘O Canada’ ahead of the matchup against the North Bay Battalion.

Today we say miigwech to the Wshkiigomang Woman's Native Hand Drum Singers from @CurveLakeFN who performed our National Anthem at last night's Let's Make Hockey for Everyone Night! pic.twitter.com/bkp3KJQrRb

The puck is about to drop for the yearly Quebec Peewee Tournament, an event which began in 1960 and allows for minor hockey players under 12 years old to gain invaluable international experience. More than 1,200 past participants have gone on to play professionally including CHL alumni like Eric Lindros (Oshawa Generals), Brendan Shanahan (London Knights), and Patrick Roy (Granby Bisons).

Family Day Festivities Across the WHL

With Family Day just around the corner, several clubs took the time to recognize the special day in hosting players’ families, while the schedule also allowed for a unique opportunity as brothers Blake Allan and Nolan Allan of the Calgary Hitmen and Prince Albert Raiders respectively posed for a pregame photo before going head to head.

A special thanks to all of our players' families who came out to #yyj to enjoy our Family Weekend! pic.twitter.com/V3pSZR1xw3

Parent's Weekend is always a blast, thanks for coming!#ItStartsNow pic.twitter.com/aSRNnS6aR7

This one is sure to make the parents happy 😁

Blake and Nolan Allan reuniting prior to tonight's game!

A winter snowstorm and postponed game wasn’t enough to keep the crowd away Friday in Saint John where despite the happenings of the night thousands of Sea Dogs fans stayed at the home rink to celebrate and support Atlantic Canadian musician Classified, on hand for the game as part of a planned special evening that was to intertwine music and hockey.

Thank you Saint John. Yesterday, on a cold winter night, you came out and showed the warmth, heart, and resilience that this city is known for.

The 20th edition of Hockey Day in Canada took place Saturday live from Yellowknife, N.W.T., a celebration of the Great White North’s favourite pastime that saw six of the seven Canadian-based franchises in the National Hockey League go head to head.

The celebration continued Sunday with the latest edition of Rogers Hometown Hockey live from the nation’s capital, with Ottawa marking the fourth CHL city to host the special day this season. On hand was Dennis Potvin, a native of nearby Hull, Que., a standout blue-liner who spent five seasons with the Ottawa 67’s in which he was twice honoured as the OHL’s Most Outstanding Defenceman before later capturing four Stanley Cup championships with the New York Islanders.

The Rogers Hometown Hockey tour continues next Sunday in Quebec City, home of the QMJHL’s Remparts.

In honour of #HockeyDay in Canada we celebrate the North.

We’re celebrating in the nation’s capital today. How are you commemorating the day?#HometownHockey | #Winterlude pic.twitter.com/qdCBShcUXv

From the Yukon to elite NHL prospect. How Dylan Cozens beat the odds.@loung_s | #HockeyDayhttps://t.co/LJaV9GatlI

"That's the one thing about the 70's/80's hockey. We didn't have free agency – we complained about it, but it created a real family atmosphere."

4x Stanley Cup Champ Denis Potvin chats about playing for @Ottawa67sHockey, and the success he had with his @NYIslanders teammates. ⬇️ pic.twitter.com/yNRxRQvJDh

February marks Black History Month and the hockey community is getting involved in the celebration including the launch of the Black Hockey History Tour that recently visited Scarborough, Ont., the hometown of Peterborough Petes forward and World Junior hero Akil Thomas, who visited the mobile museum and learned more about how African American hockey players including the legendary Willie O’Ree have positively impacted the sport.

"To learn how players such as Willie O'Ree and others opened the door for players like me, well, that's special."

It was a milestone week across the circuit as five more players became the latest to reach 300 career contests, including a trio of captains in Luke Boka (Windsor Spitfires), Connor Gutenberg (Brandon Wheat Kings), and Derek Gentile (Cape Breton Eagles), plus a pair of alternate captains in Nolan Kneen of the Saskatoon Blades as well as Liam Hawel of the Kitchener Rangers.

Congratulations to one of our leaders, Nolan Kneen on playing his 300th Western Hockey League game today!

Hail to the King of the hip check 🙌 pic.twitter.com/Aoou2r6njd

Fifth-year veteran becomes just the fourth player in @SpitsHockey history to play 300 games with the franchise.

Our captain reaches a #WHL milestone tonight when the #BWK host the Tigers at Westoba Place. Connor Gutenberg will be taking the ice to play in his 300th career game. A presentation will be made as part of tonight’s ceremonial opening face-off. #WHL pic.twitter.com/18Eh664ULJ

A change behind the bench comes in Shawinigan where the Cataractes have introduced new head coach Gordie Dwyer, who most recently served as the bench boss of the KHL’s Dinamo Minsk from 2017-19. Dwyer was also head coach of the Prince Edward Island Rocket/Charlottetown Islanders franchise from 2011-15.

Is Alexis Lafrenière a lock to be #️⃣1️⃣ overall pick? 🤔

For the 11th year running, the Portland Winterhawks will compete for the Ed Chynoweth Cup after picking up a point Tuesday versus the Spokane Chiefs, helping the club clinch a playoff berth. The Winterhawks are the WHL’s first team this season to punch their ticket to the postseason.

WE ARE OFFICIALLY IN!

The Winterhawks are the first team in the WHL to clinch a playoff spot!

It's the 11th consecutive season the Winterhawks will compete for the Ed Chynoweth Cup. pic.twitter.com/1MU40rA4YB