CHL Weekend Review: Celebrating the holidays with the community 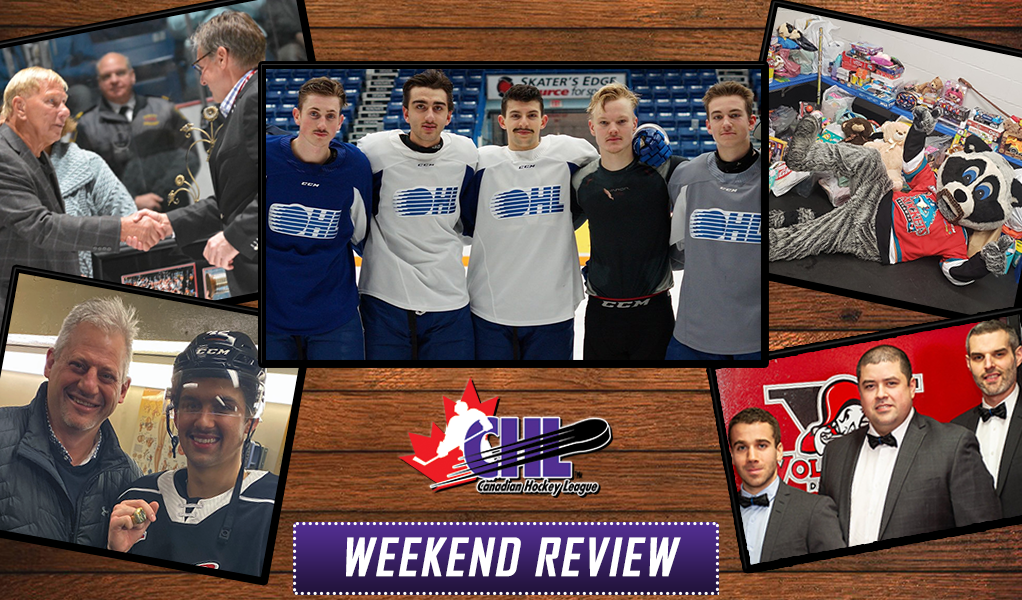 A busy week generated plenty of headlines across the Canadian Hockey League.

‘Tis the holiday season and CHL clubs were out in the community this weekend taking part in their local Santa Claus Parades, with fans, players, and team mascots getting in on the fun.

Thanks to everyone who came out for the annual Santa Claus Parade in downtown @Bdnmb Saturday night. Willie the #BWK mascot had a great time with our friends at ⁦@TimsWestman_MB⁩ #HappyHolidays pic.twitter.com/NpZaCzKNIY

Hal and Mac celebrating at the #ParadeOfLights while the boys are on the road. @Eastlink #GoMooseGo pic.twitter.com/8Yyv6SzQce

Had a great time at the St.Catharines Santa Clause Parade!! 🎅 pic.twitter.com/Ggckiksvz6

Lots of Spits fans along the route in Kingsville! pic.twitter.com/WXApHLLFs4

Following the 2019 CIBC Canada Russia Series, Sportsnet has launched its broadcast schedule for the 2019-20 campaign counting 19 regular-season contests in addition to playoff games and key events like the 2020 Kubota CHL/NHL Top Prospects Game and the 2020 Memorial Cup Presented by Kia.

The #CHL on @Sportsnet season begins in @TheWHL’s East Division.

The new schedule launched Sunday as Saskatchewan rivals in the Moose Jaw Warriors and hosting Saskatoon Blades faced off in what ultimately ended in a 4-0 final that saw Blades rookie netminder Koen MacInnes turn aside 20 shots for his first career shutout while right-wing Zach Huber led the way offensively with a two-goal effort.

The CHL on Sportsnet schedule continues Saturday with OHL action as the Mississauga Steelheads head to Ottawa to take on the 67’s and then again on Sunday with a showdown between the Sudbury Wolves and Oshawa Generals.

In partnership with Wawanesa Insurance, the CHL will host 36 local toy drives this holiday season where fans are encouraged to donate new and unwrapped toys at any Wawanesa Toy Drive game held from Nov. 16 to Dec. 15. All donors will also be entered into a grand prize draw of a trip for two to the 2020 Memorial Cup Presented by Kia in Kelowna, B.C.

We're here for the @EdmOilKings game! Doors open at 3pm. Come cheer on the team!
Drop off your new, unwrapped toy and enter to win a trip to #CHLMemorialCup! pic.twitter.com/o59SqufZti

The toys just keep coming! Thank you so much Kelowna for making the @Wawanesa Toy Drive a success for @kelownasallyann! pic.twitter.com/hY2214GBTg

Dress for the occasion

On the ice, the fun continued with several teams unveiling their annual theme night jerseys, including the Prince Albert Raiders, who sported an ugly Christmas sweater style jersey.

Thank you to everyone who came out to support our 5th annual superhero game #runwithTHOR⚡️ #worthy pic.twitter.com/YULP0X2xvu

👍 or 👎 for these Pac-Man inspired jerseys?

Thanks again to @JayAndDan for joining us and hosting #ExperienceRegina last night in Regina.

Was an absolute pleasure to welcome them officially to the #PatsRegiment pic.twitter.com/4Axg87K4sP

A host of cancer awareness initiatives are underway across the CHL, including the continuation of Pink in the Rink where clubs wear pink-themed jerseys and fans in attendance are encouraged to dress for the occasion. Pink in the Rink will continue in the coming week with the Steelheads hosting theirs Nov. 21 and the Guelph Storm on Nov. 22.

Meanwhile, clubs and players continue their participating in ‘Movember’, a movement that sees participants raise funds and grow a mustache for the month of November in an effort to raise awareness for men’s health concerns including prostate cancer, testicular cancer, mental health, and suicide prevention.

This month will also see the coaching staff of the Drummondville Voltigeurs sport bow ties in recognition of prostate cancer.

Tonight the Sarnia Sting hosted a special little girl and her family. Deklan is three years old and is fighting hard against leukemia. Tonight Honey gave Deklan a special gift to help her with her fight. This is #MoreThanAGame, this is family. #hockeyfightscancer #StingFamily pic.twitter.com/KEf8PRB6pG

Joining Team WHL at the 2019 CIBC Canada Russia Series, Everett Silvertips left-wing and Montreal Canadiens prospect Cole Fonstad returned to his former home last week for Game 6, marking his first game back in Prince Albert since a mid-October move made him a member of the Silvertips.

We finally got the chance to present @cole_fonstad with his Championship ring. Great seeing you again Fonny, wishing you continued success in Everett! pic.twitter.com/vAsvlCvJEL

The return provided Fonstad a chance to reconnect with familiar faces and allowed for the team to present him with his championship ring after helping guide the squad to its first Ed Chynoweth Cup title in 35 years last spring. Across 219 career contests with the Raiders, Fonstad recorded 63 goals and 119 assists for 182 points.

Yesterday we presented @hawel24 with his Championship ring! 💍 Thank you for everything Liam, and good luck in Kitchener! #GuelphForever pic.twitter.com/F1p12eCbmC

The Guelph Storm recently had a ring presentation of their own to former forward Liam Hawel when making a trip to Kitchener to take on the rival Rangers. The Robertson Cup champion is playing his overage season for the blueshirts and has 17 points through 14 games after suiting up in crimson for three seasons.

Another integral member of the Storm’s championship season was honoured on Saturday. Long time trainer Russ ‘Rusty’ Hammond was recognized for his 25-year tenure with the club that included over 2,000 games behind the bench and four OHL championships.

The Peterborough Petes took an extra special step in their community outreach programming by welcoming 60 new Canadians to try hockey.

With the help of Rebound Skates & Golf and the Peewee AA Ice Kats, the Petes welcomed 60 new Canadians to the PMC for Try Hockey Night before Thursday’s game.

Did they enjoy trying Canada’s game? We think the smiles on their faces said it all!#ptbo #HockeyIsForEveryone 🏒 pic.twitter.com/mnZlcRoctp

The club worked with local used equipment stores and various donors to help outfit the first time players, and had the help of a peewee girls team for the on ice session.  In partnership with Peterborough’s New Canadians Centre, the team also offered free tickets for Thursday night’s game.

In Chicago, the Blackhawks inked a three-year agreement with London Knights defenceman and co-captain Alec Regula. Originally chosen in the third round of the 2018 NHL Draft by the Detroit Red Wings, Regula’s rights were moved to the Blackhawks earlier this season in a deal that made Niagara IceDogs graduate Brendan Perlini a member of the Red Wings. Through 16 appearances with the Knights this season, Regula is scoring at above a point-per-game pace in collecting eight goals and nine assists.

Defenseman Alec Regula has inked a three-year $897,500 contract that runs through the 2021-22 season. #Blackhawks pic.twitter.com/13B857QscI

Our first pick in this summer’s draft has signed an entry level contract! https://t.co/hoQqBuLrgC

Following a long recovery period from offseason Achilles surgery, Krebs made his season debut against the Portland Winterhawks on Sunday, picking up one assist in the 4-1 final. The Okotoks, Alta., native returns to the ice after leading the ICE in scoring last season with 68 points counting 19 goals and 49 assists across 64 appearances. In all, Krebs becomes the 23rd CHL player selected in the 2019 NHL Draft to have since signed an entry-level contract.

Forward, Peyton Krebs spoke post game about being back in game action and how he saw the game unfold. pic.twitter.com/pKPen9RtPK

Saskatoon Blades alumnus Kirby Dach continues to shine with the Blackhawks as the first-year forward has now recorded nine points counting five goals and four assists across 14 appearances, including his current four-game point streak that saw him light the lamp twice in Sunday’s 4-1 win over the Buffalo Sabres.

Kirby Dach is the fourth different 18-year-old in @NHLBlackhawks history to record a point streak of 4+ games. #NHLStats pic.twitter.com/cWYI9Fi31K

Told earlier this season that he would remain with the Blackhawks for the foreseeable future, Dach has continued to impress as he sits tied for fifth in team scoring and the same spot among freshmen across the NHL. The Blackhawks originally chose Dach with the third-overall selection in the 2019 NHL Draft.