CHL Weekend Review: Caring for the community as the calendar flips to February 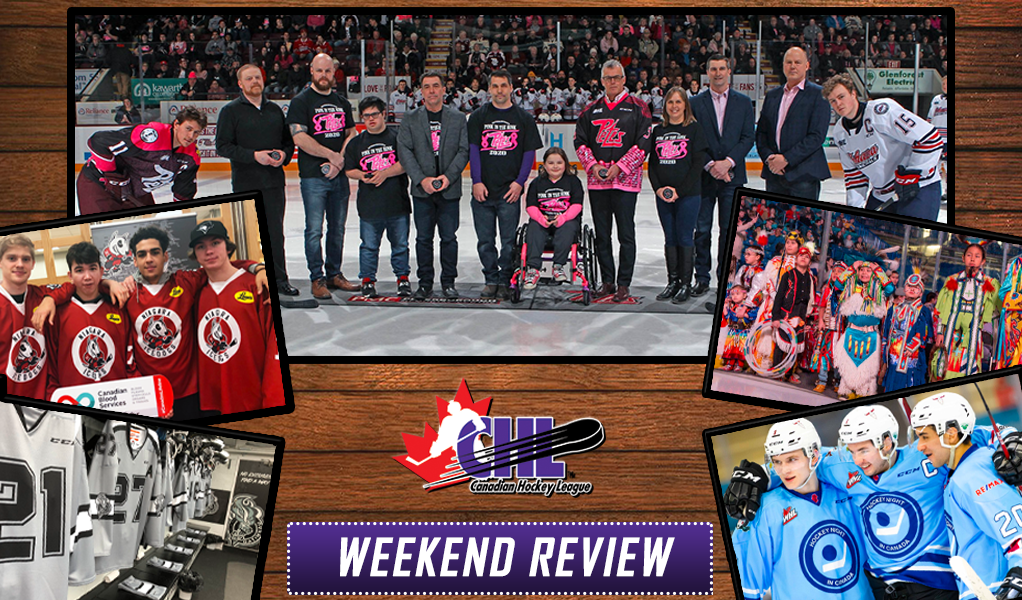 As the 2019-20 season rolls on, there has been no shortage of important theme nights and fan initiatives across the Canadian Hockey League as the calendar turns from January to February.

Last week we shared a snapshot of the Mississauga Steelheads Superhero Sweaters worn last Sunday where a portion of ticket proceeds were donated to Darling Home for Kids, a local community organization that provides residential and hospice care services to children with medically complex and progressive illnesses.

This week we share the full story of the club honouring 13-year-old Reese Meyer, a Mississauga native, who in November was diagnosed with brain cancer. The young man has continued to show courageous strength through radiation and chemotherapy treatment. Daily physiotherapist helped Reese regain strength in his limbs, enough to walk out to centre ice for a ceremonial puck drop with the Steelheads, who accompanied by his parents was met with a booming standing ovation.

This past Sunday was about more than just a game. The Steelheads would like to thank everyone that came out and showed their support for the Meyer family. This one is for the real superhero 💪 #GoReeseGo

In Oshawa, prior to Sunday’s contest versus the Hamilton Bulldogs, the Generals hosted a ‘Gen for a Day’ experience for seven-year-old Durham Region resident Alex McKeown, who is currently battling leukemia.

McKeown’s day with the team including spending time in the players’ lounge and dressing room, getting a close-up view of the pre-game warm up, and stepping on to the ice for a ceremonial faceoff. As part of the event, an autographed Eric Lindros jersey was auctioned off with proceeds supporting the family.

Introducing Alex, the newest member of the @Oshawa_Generals 👋

Alex is bravely battling leukemia. The Gens were proud to sign him to a one-day contract as a very special member of today's lineup. We're all proud of you, Alex! pic.twitter.com/ynHygTLx7R

Player of the Game honours and some special gifts from the boys for our Gen for a day, Alex! pic.twitter.com/cssmeVjTt8

Another Superhero night took place in Sherbrooke on Tuesday where the club wore specialty sweaters to help raise funds and awareness for JEVI which is a Suicide Prevention Centre. The game was fittingly played a day before #BellLetsTalk where millions of people join the national telecommunications company in raising funds and awareness for mental health initiatives.

Doing their part to help make cancer beatable, a handful of clubs including the Edmonton Oil Kings, Niagara IceDogs, Portland Winterhawks, and Peterborough Petes brought awareness with their annual cancer and Pink in the Rink nights. The night marked the 11th annual campaign for the Petes, who raised more than $88,000 to help contribute to the cause.

Thank you to our fans, and the @WHLWpgICE, for helping us stand together, United Against Cancer! pic.twitter.com/cYBU2POPo9

WHL clubs including the Moose Jaw Warriors, Prince George Cougars, and Red Deer Rebels continued the league’s ‘Suits Up’ program to promote organ donor awareness in association with the Kidney Foundation of Canada.

Chantal Hadwen dropped the puck tonight in honour of her late husband. A transplant recipient herself, it was an honour to have her here tonight on behalf of the @KidneySk #WHLSuitsUp #notoriouslyentertaining #mjwarriors #MJvsSAS #thewhl pic.twitter.com/dV5fV2JVzW

A #WHLSuitsUp win in Red Deer! The @Rebelshockey picked up a big two points at home Friday while supporting @kidneycanada w/ the help of @remaxwesterncan!

IceDogs and fans give generously

The Niagara IceDogs partnered with Canadian Blood Services for a blood drive in honour of teammate Tucker Tynan who remains in recovery after suffering a severe cut to his leg earlier this season. The initiative helped raise 51 donated units.

Our blood drive yesterday, in honour of Tucker Tynan, was a huge success!

Thank you to all the new and regular donors who donated 51 units, which is enough to fill almost 5 adult humans.

In partnership with CIBC, several clubs including the Mississauga Steelheads, Moose Jaw Warriors, and Regina Pats held the Hit Your Goals Challenge, with several lucky fans going home with a heavier wallet after finding the back of the net during the intermission segment and coming away with the prize money.

Pats Regiment! Thank you for coming out and making this years @cibc Hit Your Goals Night spectacular.

We’ll see you next time! pic.twitter.com/mahNaTJCxB

Several clubs also did their part to honour their communities, beginning with the Saskatoon Blades hosting First Nations Night. It’s a mark of pride for the Blades, whose home rink is hosted on Treaty 6 territory.

A similar celebration took place in Calgary where the Hitmen hosted Every Child Matters night in partnership with Treaty 7. The night is held as a celebration of Indigenous youth empowerment provided through sports.

Today’s the day! #EveryChildMatters | #25Together pic.twitter.com/JHiQl2OG2F

"I think what it's impacted in my life is that it gives me a sense of who I am."

Heather Wolf Ear shares her story of how she got into dancing and the work that the First Nations Health Consortium does for children! #EveryChildMatters | #25Together pic.twitter.com/m8t5DJvYZj

Elsewhere, the celebrations continued in Spokane as the Chiefs hosted Pride Night in recognition of Hockey is For Everyone, which strives to bring positive social change and promote inclusiveness through hockey.

🏒🏳️‍🌈| Chiefs going with @PrideTape during warmups tonight as a nod to #HockeyIsForEveryone Night, one of many specialty themed group nights this season! #GoChiefsGo pic.twitter.com/uvbBAw6yfm

In the OHL, the Peterborough Petes held a theme game of their own in Faith Night with Peterborough native, Sudbury Wolves graduate, and noted Christian in Mike Fisher in the house to mark the occasion.

Following the contest, more than 1,000 remained in the arena to post-game to join in a discussion with Fisher about faith, family, and hockey.

The Saginaw Spirit also held their 13th annual Shocks & Saves Night that supports the fight against heart disease and helps train people to perform CPR to reduce the number of cardiac arrest casualties.

Thanks to the great crowd that stayed after tonight’s game to take in a discussion on faith, family, and hockey with @mikefisher1212! pic.twitter.com/6wg53mzfDE

There was another theme night of note in the QMJHL as the Gatineau Olympiques sported football-inspired uniforms ahead of the 54th NFL Super Bowl that featured a showdown between the Kansas City Chiefs and the San Francisco 49ers. As part of the event, fans were invited to bid on the unique jerseys.

Wouters facing off for hunger

Saskatoon Blades captain Chase Wouters is raising money for the Saskatoon Food Bank & Learning Centre through a partnership with Nutrien and his Face-Off for Hunger Initiative that sees $10 donated for every face-off he wins this season.

Hey #BladeCity, I am challenging you to join me in the @NutrienLTD face-off for hunger! Jump on board https://t.co/bZnjMhZ2hV pic.twitter.com/YwrgrKJ636

Ottawa 67’s overage forward Austen Keating became the season’s first player to reach the prestigious 300 career points plateau. His 104 career goals and 196 assists over 293 games makes him just the 13th member of the 67’s to reach the 300 club.

Congrats on this huge accomplishment.👏🏻👏🏻 pic.twitter.com/a9SIGlhv0u

A pair of WHL overagers joined the 300 career games club including Brayden Watts of the Prince Albert Raiders and Austin Pratt of the Regina Pats.

Congratulations to Brayden Watts, who is playing in his 300th career game tonight!#GoRaidersGo pic.twitter.com/uCLgSwO50U

What a milestone for the Captain tonight!

Congrats Austin Pratt on your 300th game in the @TheWHL!#JoinTheRegiment pic.twitter.com/ysxuv9p2A9

“You score on 100% of the shots you take”
– Arthur Kaliyev, probably.@Arthur_Kaliyev is now your all-time OHL Hamilton Bulldogs franchise goals leader! #KingArthur 👑 pic.twitter.com/miF4ZTgS4p

Egor Sokolov is your new Eagles record holder for goals in a season by a foreign born player!

Congratulations to @JeremiePoirier4 who scored his 16th goal of the season tonight and took over the Sea Dogs' franchise record for most goals in a single season by a defenceman. #SeaDogs15 pic.twitter.com/XVqq9yfacr

The Flint Firebirds and Sherbrooke Phoenix continue to re-write their own records this season with the OHL club setting a new consecutive wins mark, while the QMJHL club is officially enjoying their most successful season in history.

With tonight's victory, the Firebirds have now set a new all-time record for consecutive wins in franchise history!#ThisIsFlint pic.twitter.com/6sx5TBUp3i

The 67’s and Phoenix became the league’s first two clubs to officially secure a berth in CHL playoff action beginning in mid March. That leaves just 46 more spots up for grabs.

The first of a new weekly show was launched by the OHL with the goal of giving fans an inside scoop on the latest news from on the ice to in the community along with featured guests appearing regularly on air.

Introducing the brand new #OHL This Week Podcast: A weekly show featuring a wide range of guests that covers the League’s latest news from both on the ice and in the community 🏒

Boston Bruins prospect Jack Studnicka, who finished the 2018-19 CHL season with the Niagara IceDogs, was named AHL Player of the Week scoring three goals and two assists for five points in two games for the Providence Bruins. He’s just the second rookie this season to have gone straight from the CHL to AHL and earn the honour following fellow IceDogs grad Jason Robertson of the Texas Stars who was recognized in December.

With five points in two games, @AHLBruins forward @JStudnicka23 has been named the @CCMHockey / AHL Player of the Week.