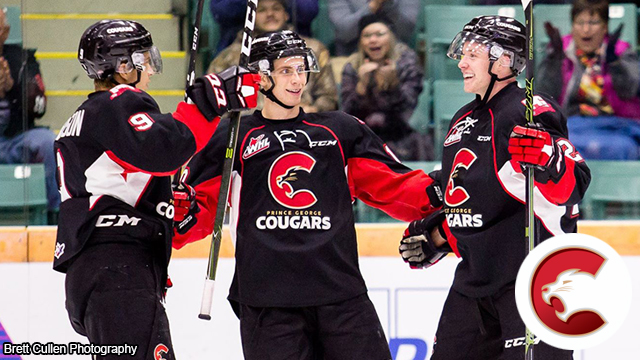 It’s early, but the top ranked Prince George Cougars are getting people’s attention.

The Cougars are off to a 6-0 start, outscoring opponents 24-10 under new head coach Richard Matvichuk, a stretch that has included three wins over the ever-competitive Kelowna Rockets and back-to-back victories over the reigning B.C. Division champion Victoria Royals.

RECAP: The Cougars make it six straight wins to start the season after a 3-0 shutout over Kelowna Saturday.

“The biggest thing with our team this year is we don’t care who’s scoring,” Bethune, who has 10 points (5-5–10) over six games told the Prince George Citizen’s Ted Clarke. “We’re just playing for each other and trying to win every game and it’s showing.”

“Six in a row is a big deal – it was our biggest streak last year so we’re just hoping to beat it this year,” said 19-year-old forward Aaron Boyd, who scored his first of the season on Saturday. “I think we all came in with a different mindset this year, with a new coach and having all these new systems to follow. It’s just a lot more fun this year.”

Winning is fun, and Matvichuk, who played for the Saskatoon Blades in his WHL playing days before a 13-year NHL career that included a Stanley Cup title with the Dallas Stars in 1999, seems to have rekindled an excitement in Prince George.

“Every game has been a complete team effort which is very gratifying for me,” he said. “You look at the way guys are sacrificing their bodies for each other and the friendships – they’ve already bonded this early in the year, it’s awesome.”

While they’ve had no problem finding the back of the net, the veteran goaltending tandem of overager Ty Edmonds and 19-year-old Nick McBride has been solid, allowing just 10 goals over six games. They look to keep the Cougars rolling in the midst of a current six game home stand that includes back-to-back dates with Vancouver and Everett over the next two weekends.

The Cougars haven’t won a playoff series since 2007, but with a new face behind the bench and a renewed enthusiasm in BC’s ‘northern capital’, the cats are on the prowl, looking like they’ll be a competitive force in the Western Conference.

Written with files from Ted Clarke at the Prince George Citizen. Full story