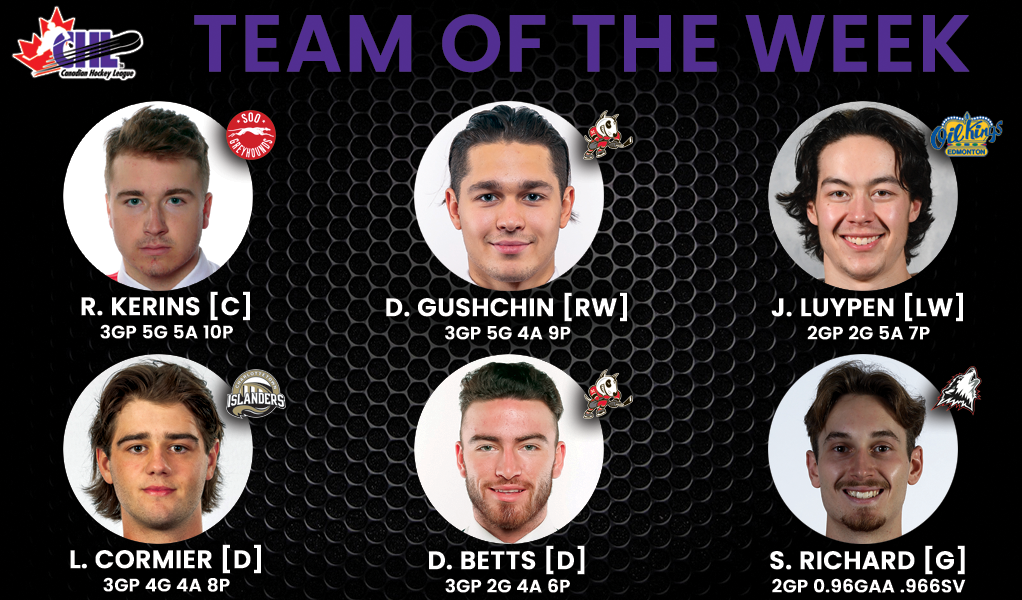 The Canadian Hockey League announced today the third edition of the CHL Team of the Week for the 2021-22 regular season based on individual performances from October 18-24.

Leading the forward ranks is Calgary Flames draftee and Soo Greyhounds centre Rory Kerins who wrapped up the week with 10 points counting five goals and five assists coming in three games. Facing North Bay on Friday, the 19-year-old Caledon, Ont., native finished with a career-best six points highlighted by his first-ever hat-trick. In all, the dominant week gives Kerins 14 points on the season, moving him into a tie for top spot in league-wide scoring. For his efforts, Kerins was also recognized as the OHL Player of the Week.

Also up front is San Jose Sharks up-and-comer and Niagara IceDogs right-wing Danil Gushchin who impressed with five goals and four assists for nine points coming in a trio of contests. Skating in his first season with the IceDogs, Gushchin’s top performance of the week came Thursday against Barrie as he netted five points including his first career hat-trick en route to an 8-5 victory and first-star honours. Chosen fourth overall in the 2020 CHL Import Draft, the 19-year-old Russian-born forward currently leads Niagara in scoring with 10 points in seven games.

Rounding out the forward ranks is Chicago Blackhawks prospect and Edmonton Oil Kings left-wing Jalen Luypen who wrapped up the week with seven points counting two goals and five assists coming in a pair of appearances. Luypen’s top performance came Friday against Brandon when he posted a season-high four points including two goals and two assists for first-star honours in the 9-2 final. Luypen now sits tied for top spot in team scoring with eight points. For his efforts, the 19-year-old Kelowna, B.C., native was also recognized as the WHL Player of the Week.

Headlining the back end is Vegas Golden Knights draftee and Charlottetown Islanders blue-liner Lukas Cormier who collected four goals and four assists for eight points through three appearances. In all, Cormier’s week was highlighted by Sunday’s 7-5 victory versus Val-d’Or in which he finished with two goals and two assists – including the eventual game-winning tally – en route to first-star honours. Sitting third in team scoring with 12 points in 10 games, the 19-year-old native of Sainte-Marie-de-Kent, N.B., was recognized as the QMJHL’s Player of the Week.

Also on the blue line is Niagara IceDogs overage rearguard Dakota Betts who impressed with six points counting two goals and four assists over three games, highlighted by a career-best four-point showing coming Thursday versus Barrie. Wrapping up the contest against the Colts with two goals and two assists, the 20-year-old product of Bowmanville, Ont., stands at a point-per-game pace on the season with seven points through as many contests.

Between the pipes, Rouyn-Noranda Huskies overage goaltender Samuel Richard found the win column in a pair of appearances versus Acadie-Bathurst and Moncton. Wrapping up the week with a combined 56 saves alongside a .966 save percentage and 0.96 goals-against average, Richard’s top performance came in Friday’s showdown against the Titan that saw him turn aside all 24 shots for his second-straight shutout. The Sainte-Catherine, Que., native has made eight appearances this season, coming away with four victories.

2022 NHL Draft | Under the Microscope: Francesco Iasenza
5 hours ago