CHL TV Game of the Week presented by Kubota | 3 Reasons to Watch – Firebirds vs. Spirit 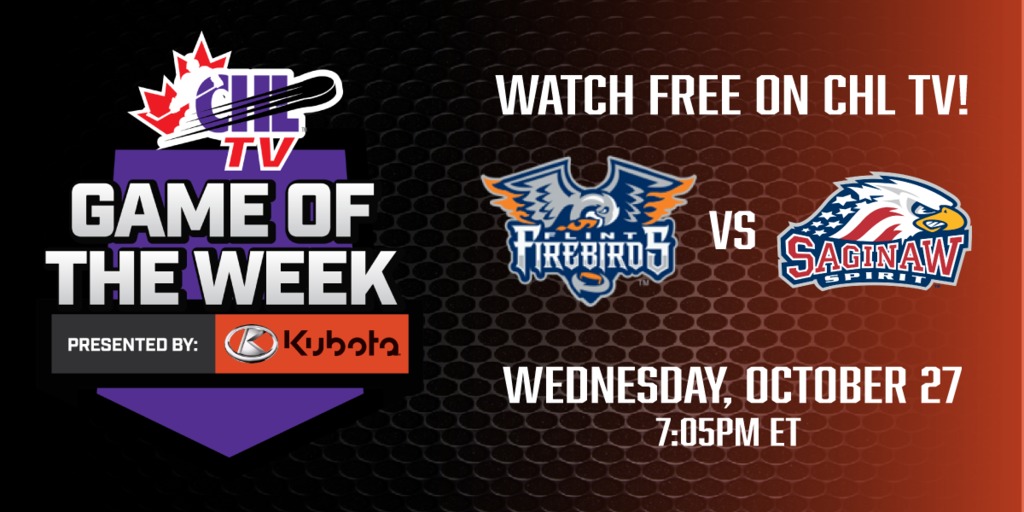 The CHL TV Game of the Week presented by Kubota brings a weekly free game to CHL TV throughout the 2021-22 regular season. The action continues Wednesday as the Flint Firebirds visit the Saginaw Spirit with puck drop set for 7:05 p.m. Eastern.

To get you ready, here are three reasons why this showdown of Michigan rivals is must-see TV:

One of the top netminders in the circuit, it is worth tuning it to catch the latest from Saginaw Spirit goaltender Tristan Lennox, a 2021 third-round selection of the New York Islanders who is off to a solid start in the new campaign in coming away with two victories alongside a .905 save percentage and 2.52 goals-against average through four appearances. Bringing modern size between the pipes, Lennox plays with plenty of confidence built on solid positioning. Playing an athletic style despite his larger size, Lennox challenges opposing shooters, while his biggest task Wednesday will be shutting down Flint Firebirds star winger Brennan Othmann, a New York Rangers prospect who plays with plenty of pace and is already off to a strong start to the new season with four points through three contests. Beyond Lennox and Othmann, other NHL prospects who will participate in the Wednesday affair include Braeden Kressler (Toronto Maple Leafs) and Dmitry Kuzmin (Winnipeg Jets) of the Firebirds as well as Spirit centre Josh Bloom, a draft choice of the Buffalo Sabres.

Twisting and turning to make the save 🌪️@NYIslanders prospect Tristan Lennox (@lennox30_) of @SpiritHockey morphs into a human hurricane to keep the puck out and earn Sunday's @RealCdnSS #SaveoftheNight honours 🎥 pic.twitter.com/hKmpXnsTR0

On the heels of NHL Central Scouting’s initial Players to Watch report ahead of the 2022 NHL Draft, three of the 143 CHL talents recognized come from the pair of Michigan clubs. For Flint, that is budding right-wing Gavin Hayes, a product of nearby Westland, Mich., who is skating in his first season with the squad after originally being chosen 16th overall in the 2020 OHL Priority Selection. Meanwhile, the Spirit bring a pair of 2022 NHL Draft hopefuls to the table in Czech-born centre Matyas Sapovaliv as well as Russian rearguard Pavel Mintyukov, both of whom headed to Saginaw this season after being chosen in the opening round of the past two CHL Import Drafts. Among the three – all projected to be taken within the top-100 selections of the upcoming NHL Draft class – Sapovaliv has made the earliest adjustment to the OHL, already with five points through as many contests this season as he sits tied with Bloom for the team scoring lead.

We see you, @sapovaliv! 👀🇨🇿

Some superb @SpiritHockey passing sets the 2022 #NHLDraft prospect up for his first #OHL goal in the dying seconds of the middle frame 🎥 pic.twitter.com/oDDHt31ao3

Beyond NHL Draft eligible talent, another name to circle is Firebirds 16-year-old centre Coulson Pitre whose freshman season already sees him with three goals in three games. Originally chosen by Windsor in the 2020 OHL Priority Selection, Pitre shifted to Flint last month and in the ensuing weeks has provided the club with impressive early returns. Playing with a shoot-first mentality, Pitre found the back of the net in his first-ever game – a 3-0 win versus Erie – while his most recent appearance saw him score twice versus Saginaw. In all, the three appearances have seen him put eight shots on goal, just shy of the team lead. Hoping to bring the next wave of offensive support to the Firebirds, Pitre said in a release, “It feels great to be here in Flint. I am excited for the opportunity to better develop my skills and to help my team win, which is the ultimate goal.”