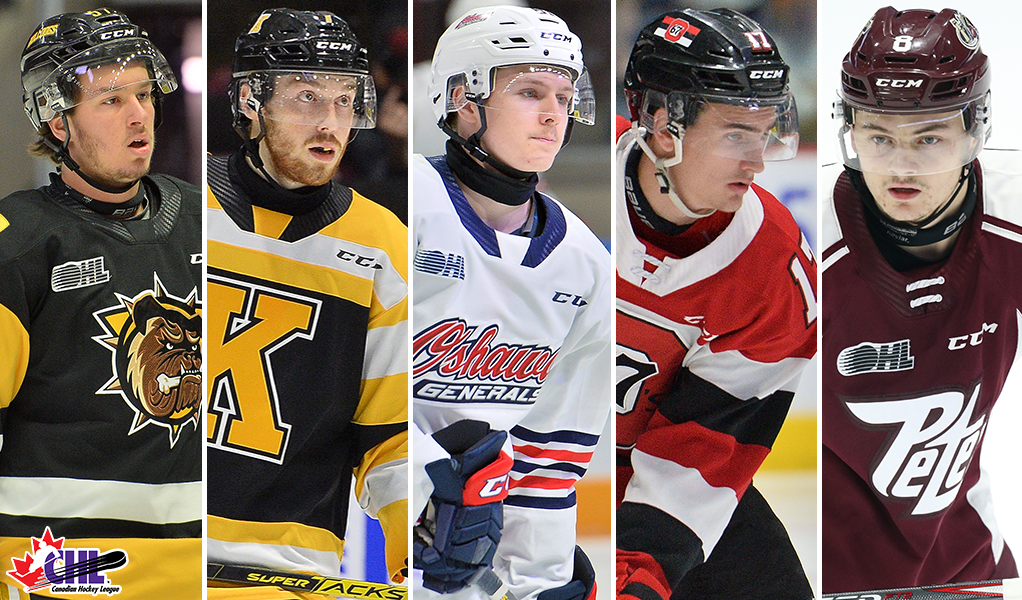 A lone 2000-born player will move on from the Hamilton Bulldogs in blue-liner Jake Gravelle, a steady defender whose junior career originally began with Mississauga before joining the Bulldogs in 2017-18. In all, the product of Callander, Ont., made 130 appearances in the OHL, highlighted by a 25-point finish in his final campaign.

Jake Gravelle & Jake Murray have been tremendous for the Bulldogs organization on and off the ice and fans in #HamOnt will get to hear from them all about their time in Black & Gold!#OHL pic.twitter.com/Hsi2gj9h38

The Kingston Frontenacs will wave goodbye to three overagers, beginning up front with left wingers Dawson Baker and Justin Pringle. A solid secondary scorer, Baker’s junior career closes after splitting time between Sudbury and Kingston, where he improved his productivity each season along the way to culminate with 53 points across 194 career contests. For Pringle, his best offensive season came in 2019-20 when he put up three goals and seven assists through 54 outings. Elsewhere, the Frontenacs will also part with longtime blue-liner Emmett Gordon who totaled 133 appearances with the club since making his OHL debut in 2016-17. For the coming campaign, Gordon will continue his playing career at the academic level with the Guelph Gryphons.

The Kingston Frontenacs organization would like to wish Justin Pringle all the best as he joins the @CougarsHockey.

We can't thank Justin enough for his contributions on and off the ice.

The Oshawa Generals will be without a familiar face for the coming campaign following the graduation of veteran centre Allan McShane. After originally debuting with Erie, McShane then spent part of the next four seasons with the Generals in which he amassed 245 points over 253 career contests – highlighted by OHL First All-Rookie Team recognition in 2016-17 following a 44-point rookie season – the skilled forward will turn pro this season with Sweden’s tier-two Tingsryds AIF. Elsewhere, the Generals will see at least two departures on defence, headlined by puck-moving blue-liner Giovanni Vallati who saw a pair of appearances last season with the AHL’s Manitoba Moose and is set to continue his pro career with the Cleveland Monsters for the coming campaign. Originally chosen by Kitchener in the opening round of the 2016 OHL Priority Selection, Vallati ultimately made 253 career appearances with the Rangers and Generals, underscored by a spot on the OHL Second All-Rookie Team in 2016-17. Additionally, the Generals will also part with fellow rearguard William Ennis who after spending the entirety of his junior career with Oshawa, which accounted for 239 total appearances, will play with the University of Windsor Lancers in 2021-22. Meanwhile, the Generals will also be without graduated goaltender Jordan Kooy, who prior to arriving in Oshawa also made stops in London and Sarnia, highlighted by a spot on the 2017-18 OHL Second All-Rookie Team while part of the Knights.

We can't think of someone who exemplifies what it means to be an Oshawa General more than Allan McShane.

You have always been a leader on and off the ice.

We wish you all the best as you continue your professional hockey career with @Tingsrydsaif.#OnceAGeneralAlwaysAGeneral pic.twitter.com/SMhq2UI6Os

A revamped roster is coming in Ottawa following the graduation of five players, headlined by long-time centre Mitchell Hoelscher. Following part of four seasons all spent with the 67’s in which he collected 146 points through 203 career contests, the former New Jersey Devils draftee opted to stay close to home, landing a minor-pro pact with the Belleville Senators, with whom he made seven appearances last season. Also up front, the 67’s will move on from veteran right-wing Daylon Groulx, who prior to heading to Ottawa in 2019-20 spent the majority of his playing days in Owen Sound, with his most successful showing coming in 2018-19 when he finished with 38 points through 68 games. The 67’s will also see the departures of centre Felix-Antoine Tourigny (McGill Redbirds) and defenceman Merrick Rippon (Acadia Axemen), while between the pipes Ottawa will also be without longtime goaltender Cedrick Andree. Making 101 appearances over three seasons with the club in which he claimed consecutive honours with a league-low goals-against average while surrendering just 21 regulation losses over a trio of campaigns, the past season saw Andree earn a two-game trial with the minor-pro Belleville Senators.

Congratulations to Mitch Hoelscher who was just named the @OHLHockey #OnTheRunPlayer of the Week! 🔥

The Peterborough Petes will see the departure of three players including a pair who have committed to the University of Windsor Lancers for the coming campaign in right-wing John Parker-Jones and defenceman Matt McNamara. The changes begin with Parker-Jones, who spent the entirety of his junior career with the Petes, totaling 12 goals and 14 assists over 141 games, including a 15-point finish in 2019-20, while McNamara put up similar production in collecting 31 points over four seasons and 168 career contests. Elsewhere, the Petes will also see the departure of veteran centre Max Grondin, a second-round draft choice from the 2016 OHL Priority Selection who ultimately split 256 career appearances between Saginaw and Peterborough before committing to the University of Ottawa Gee-Gees for the coming campaign.