CHL Awards of the Decade: Past winners of the Rookie of the Year presented by Wawanesa Insurance 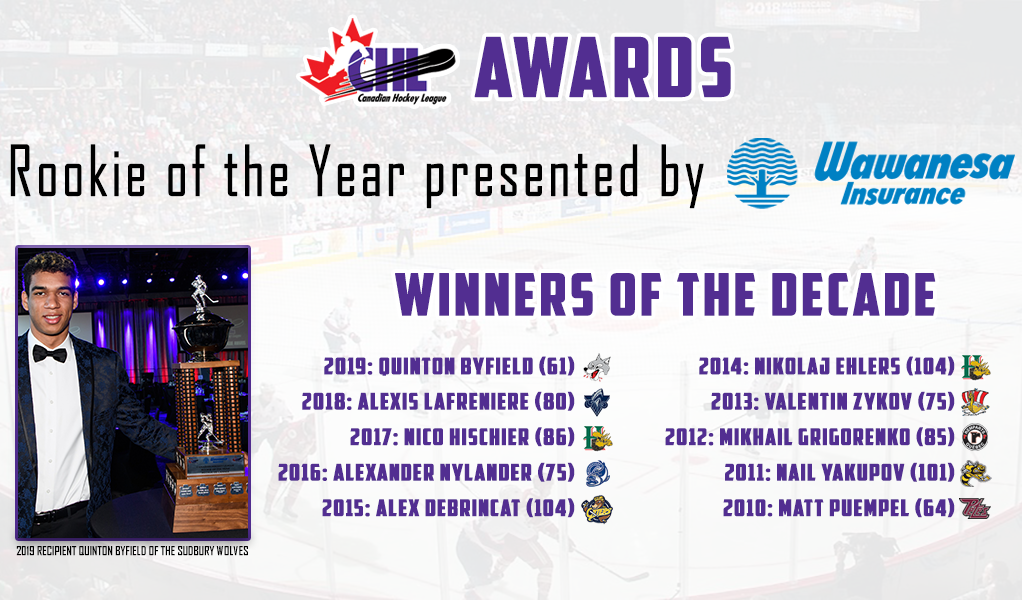 The Canadian Hockey League’s Rookie of the Year Award, presented this season by Wawanesa Insurance, is for the top rookie from across the CHL.

Presented annually since 1988, this year’s award will go to either Dylan Guenther of the Western Hockey League’s Edmonton Oil Kings, Shane Wright of the Ontario Hockey League’s Kingston Frontenacs, or Zachary Bolduc of the Quebec Major Junior Hockey League’s Rimouski Oceanic. But before we find out who the newest recipient is, let’s take a closer look at the last decade of winners.

Byfield put together an impressive freshman campaign that saw him produce nearly a point-per-game pace as he notched 29 goals and 32 assists for 61 points across 64 games. The 16-year-old from Newmarket, Ontario, was chosen first overall by the Wolves in the 2018 OHL Priority Selection and is now a top prospect for the 2020 NHL Draft.

Lafreniere turned in a dominant 16-year-old season leading all underage rookies from coast-to-coast with 80 points including 42 goals and 38 assists in 60 games. The St-Eustache, Quebec, native was the first overall pick in the 2017 QMJHL Entry Draft and followed his freshman season with CHL Player of the Year honours and now with his third major junior season behind him is the top ranked prospect for the 2020 NHL Draft.

Hischier led all rookies in scoring with 86 points in 57 games including 38 goals and 48 assists. The 18-year-old from Switzerland was chosen sixth overall by the Mooseheads in the 2016 CHL Import Draft and was the second ranked North American skater prior to the 2017 NHL Draft. He would be selected first overall by the New Jersey Devils and has already played three full seasons with 135 points through 209 games to date.

Nylander scored 28 goals and 47 assists for 75 points in 57 games played which set a Steelheads rookie scoring record. The 18-year-old from Sweden was picked 12th overall in the CHL Import Draft and finished the season as the third ranked North American skater for the 2016 NHL Draft. He would be selected eighth overall by the Buffalo Sabres and immediately turned pro where through four seasons has played in 84 NHL games including 65 with the Chicago Blackhawks posting 26 points in 2019-20.

DeBrincat led all rookies with 51 goals and 53 assists for 104 points in 68 games for the Otters. The 17-year-old from Detroit, Michigan, was the first 50-goal rookie since fellow American Patrick Kane who hit the milestone in 2006-07. DeBrincat would be selected by the Blackhawks in the second round of the 2016 NHL Draft and had two more CHL seasons exceeding 50 goals before making his NHL debut. Through three seasons in Chicago he’s registered 173 points in 234 career games.

Ehlers finished fourth in QMJHL scoring with 104 points including 49 goals and 55 assists with an incredible plus-minus rating of plus-65 in 63 games for the Mooseheads. The 18-year-old from Denmark joined the league as the sixth overall pick in the 2013 CHL Import Draft and would later become the ninth overall pick in the 2014 NHL Draft by the Winnipeg Jets. Following one more season in Halifax exceeding the century mark for points yet again, he turned pro and has played five NHL seasons producing 257 points through 369 career games in the Manitoba capital.

Zykov led all first year players in scoring with 40 goals and 35 assists for 75 points in 67 games with the Drakkar. The 18-year-old Russian was a second round pick in the 2012 CHL Import Draft and immediately became a top rated prospect for the 2013 NHL Draft. He would be chosen in the second round by the Los Angeles Kings in 2013 and played two more seasons in the QMJHL before embarking on his pro career that has since included stints with three different teams in both the AHL and NHL.

Grigorenko recorded 40 goals and 45 assists for 85 points in 59 games for the Remparts after being the club’s second overall pick in the 2011 CHL Import Draft. The 18-year-old Russian was also a top ranked NHL Draft prospect in 2012 and went 12th overall to the Buffalo Sabres. He split time in the CHL and NHL over the next two seasons that followed his rookie campaign and played in his 217th career NHL game in 2016-17 with the Colorado Avalanche. His last three seasons were played in the KHL.

Yakupov led all rookies and finished tied for fourth overall in OHL scoring with 101 points in 65 games accumulating 49 goals and 52 assists for the Sting surpassing Steven Stamkos’ team rookie records. The 17-year-old Russian was the second overall pick in the 2010 CHL Import Draft and developed into the first overall pick in the 2012 NHL Draft to the Edmonton Oilers winning the league’s Top Prospect award prior to his selection. He played in 350 career NHL games scoring 136 points over six seasons from 2012-18 before heading home to the KHL the last two years.

Puempel led all OHL rookies in scoring with 64 points in 59 games which included 33 goals and 31 assists. The 17-year-old from Essex, Ont., was selected by the Petes with the sixth overall pick in the 2009 OHL Priority Selection and played three full seasons with the club before finishing his CHL tenure with the Kitchener Rangers in 2012-13. The Ottawa Senators chose Puempel in the first round of the 2011 NHL Draft and saw him make his NHL debut during the 2014-15 season. He’s now played in 87 career NHL games, most recently with the Detroit Red Wings last season, and had 39 points in 46 games with their AHL affiliate in Grand Rapids this year.