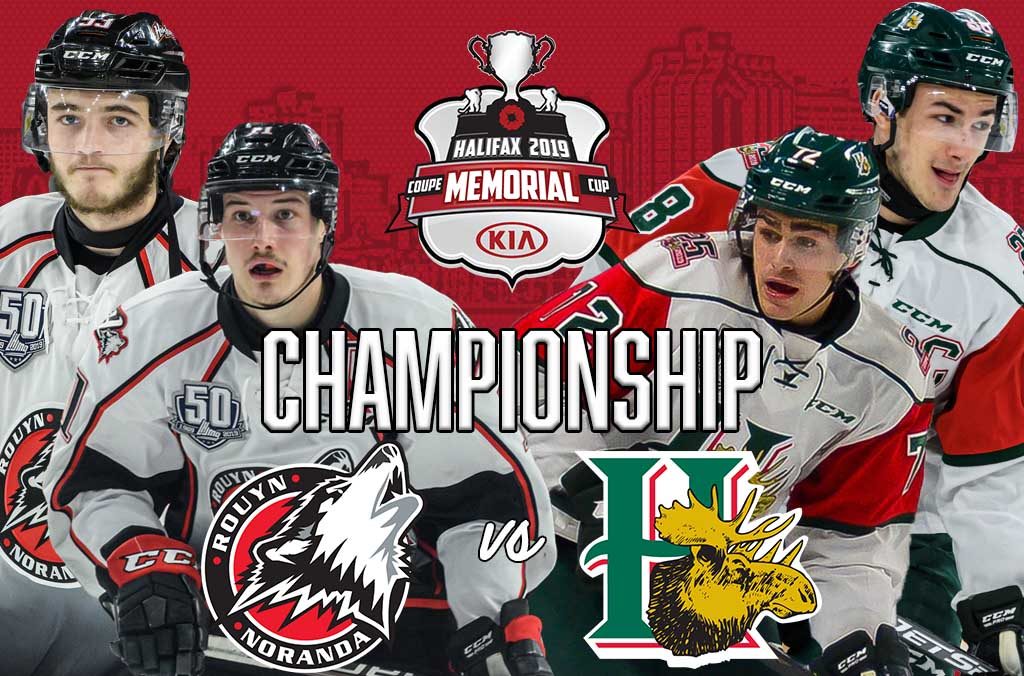 A pair of QMJHL rivals in the Rouyn-Noranda Huskies and the Halifax Mooseheads will face off in the Championship Final at the 2019 Memorial Cup presented by Kia.

The Huskies and Mooseheads are the last two squads standing in a 60-team circuit that sees that top four clubs advance to the year-end tournament. Through round robin play, both teams put up a 2-1 showing, with the host Mooseheads earning a bye to the final round due to the goal differential tie-breaker. That saw the Huskies need to go through the OHL’s Guelph Storm in semi-final action, coming away with a 6-4 win to earn their second-ever appearance in the Memorial Cup Final, where they will look for the opposite outcome this year after the club fell in overtime to the OHL’s London Knights in 2016.

A round-robin matchup between the Mooseheads and Huskies saw Rouyn-Noranda claim a 4-3 victory, a rare result that left both sides satisfied as the outcome earned the Mooseheads a bye into the finals, while the Huskies also stayed alive to earn a spot into semi-final play. That contest saw left-wing and Boston Bruins prospect Jakub Lauko lead the way for the Huskies with a two-point effort, including the game-winning goal with less than 55 seconds remaining as the Huskies poured on the offensive pressure in the final frame by the tune of an 18-2 shot advantage.

The contest also presented a rematch of the 2019 QMJHL Final that saw the first-place Huskies down the Mooseheads in six games, with two of the team’s wins, including the series-deciding victory, coming on the road. It has been a banner year for the Huskies as the 2018-19 campaign saw the club set a QMJHL record for 59 wins in a single season, while the team also tied the CHL high-water mark with 25 consecutive victories, matching the total originally set by the QMJHL’s Sorel Éperviers in 1974. This year also marks the first time since 2007 when two playoff opponents will see each other again in the Memorial Cup Final.

We’re going, going… back, back, to the… final, final! 🎶 #MemorialCup pic.twitter.com/svsDcthsJB

In advancing to the Memorial Cup Final, Huskies defenceman Noah Dobson is among a group of players who have the chance to become repeat champions after he won it all last season with the Acadie-Bathurst Titan. It’s been a whirlwind year for the budding blue-liner, who after hoisting the Memorial Cup last spring was selected in the first round of the 2018 NHL Draft by the New York Islanders and then later named to Team Canada at the 2019 IIHF World Junior Hockey Championship. With their sights set on a championship, the Huskies added Dobson ahead of this year’s trade deadline, with the move providing immediate results as he put up 29 points in 20 postseason appearances to claim the Guy Lafleur Trophy as the QMJHL playoff MVP. The deal also reunited Dobson with head coach Mario Pouliot, the Huskies’ first-year bench boss who won the CHL title with the Titan last season.

Meanwhile, a pair of familiar faces on the Mooseheads also have the chance to enter the winner’s circle in back-to-back years, namely centre Samuel Asselin, who led the team in regular season scoring with 86 points across 68 appearances, as well as captain and Anaheim Ducks draft pick Antoine Morand. Also drawing attention on the Mooseheads is draft-eligible right-wing Raphael Lavoie, NHL Central Scouting’s top player competing in the 2019 Memorial Cup presented by Kia as he ranks 20th among North American skaters. Lavoie had a dominant postseason in which he finished second in QMJHL playoff scoring, while also topping the charts with an incredible 20-goal output.

Should the Mooseheads come away with the victory Sunday, it will mark the franchise’s second-ever Memorial Cup title, and first since 2013, while the Huskies are in search of their first-ever win after falling short just three years ago. Catch all the action between the Huskies and Mooseheads on Sunday at 7 p.m. ET/4 p.m. PT on Sportsnet and Sportsnet NOW. Fans can also tune in at CHLLive.ca.