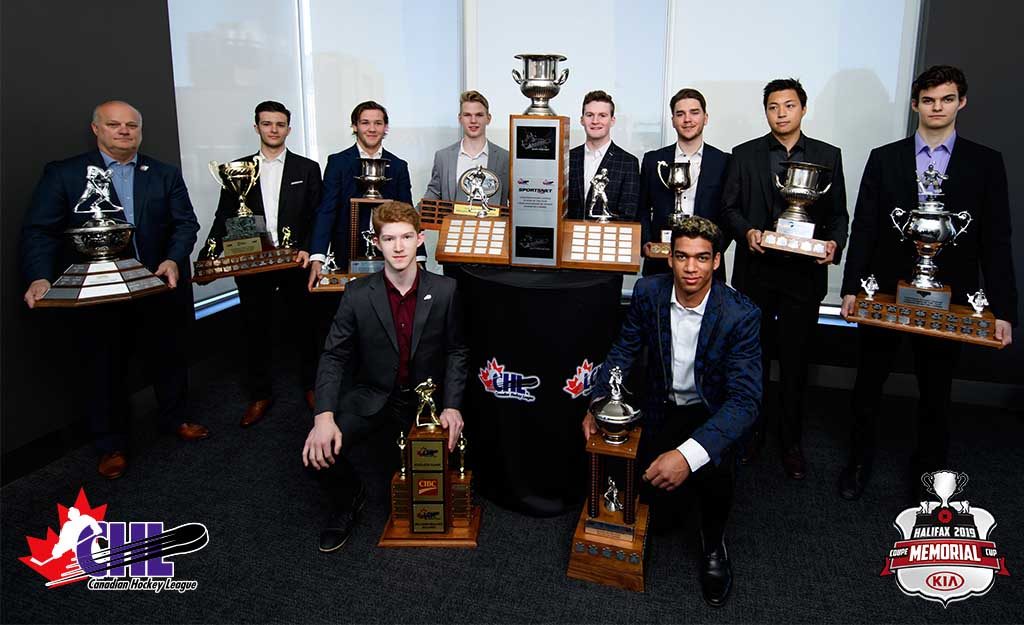 The Canadian Hockey League today announced the 10 national award winners for the 2018-19 season including 2020 NHL Draft eligible prospect Alexis Lafreniere of the Rimouski Oceanic who earned Sportsnet Player of the Year honours.

The awards were presented as part of the 2019 Memorial Cup presented by Kia festivities in Halifax.

Sherwin-Williams Top Prospect Award: Bowen Byram, Vancouver Giants
Vancouver Giants defenceman Bowen Byram sits second in NHL Central Scouting’s Final North American Rankings ahead of the 2019 NHL Draft in Vancouver. The 17-year-old product of Cranbrook, B.C., wrapped up the 2018-19 campaign with 71 points in 67 appearances, including 26 goals to lead all WHL rearguards. He then finished first in league playoff scoring with 26 points, counting eight goals and 18 assists. Byram is the first WHL player to claim the Top Prospect Award since Nolan Patrick (Brandon Wheat Kings) in 2017. Finalists for the award this year also included Arthur Kaliyev of the Hamilton Bulldogs, who ranks seventh among North American skaters, and Raphael Lavoie of the Halifax Mooseheads, who is listed 20th overall. Watch

Emera Top Scorer Award: Jason Robertson, Niagara IceDogs
Niagara IceDogs left-wing Jason Robertson led the CHL with 117 points in 62 games, counting 48 goals and 69 assists to help guide the IceDogs to a second-place regular-season finish in the OHL’s Eastern Conference. Following a midseason trade from the Kingston Frontenacs, the Dallas Stars prospect pushed the pace with his new club, tallying 79 points in 38 games. The 19-year-old native of Northville, Mich., is the first OHL skater to claim the Top Scorer Award since Dylan Strome (Erie Otters) did so in 2015. Finalists for the award this year also included San Jose Sharks prospect Joachim Blichfeld of the Portland Winterhawks, who scored 114 points, as well as Peter Abbandonato of the Rouyn-Noranda Huskies, who finished with 111 points. Watch

Bumper to Bumper Sportsman of the Year Award: Justin Almeida, Moose Jaw Warriors
Moose Jaw Warriors centre Justin Almeida wrapped up the 2018-19 campaign with 111 points, including 33 goals and 78 assists, to finish just three points shy of the league scoring lead and help the Warriors secure third place in the WHL’s East Division. The 20-year-old from Kitimat, B.C., was also whistled for just 14 minutes in penalties as the Pittsburgh Penguins prospect took home the Brad Hornung Trophy as the WHL’s Most Sportsmanlike Player. He is the second consecutive WHL skater to win the award after Aleksi Heponiemi (Swift Current Broncos) did so a year ago. Finalists for the Sportsman of the Year Award this year included Montreal Canadiens prospect Nick Suzuki of the Guelph Storm as well as Rouyn-Noranda Huskies centre Peter Abbandonato. Watch

Kia Humanitarian of the Year Award: Charle-Edouard D’Astous, Rimouski Oceanic
Rimouski Oceanic defenceman Charle-Edouard D’Astous excelled on the ice while also serving as an ambassador in his hometown community of Rimouski, Que., in helping to raise $3,500 for the Rimouski Regional Hospital Foundation, for which he also served as a spokesperson. The 21-year-old signee of the AHL’s Grand Rapids Griffins was also involved with several other local charitable causes. On the ice, the fourth-year player led all QMJHL defenceman with 66 points, including a league-leading 25 assists on the power play. D’Astous is the first QMJHL player to win the award since Danick Martel (Blainville-Boisbriand Armada) in 2015, and the second from his team to win following Philippe Sauve in 1999. Finalists for the Humanitarian of the Year Award this year included Will Warm of the Edmonton Oil Kings and Nicholas Canade of the Mississauga Steelheads. Watch

CIBC Scholastic Player of the Year Award: Dustin Wolf, Everett Silvertips
Everett Silvertips goaltender Dustin Wolf excelled both on the ice and in the classroom, where he maintained a 100% average across a Grade 12 workload covering four courses. Between the pipes, the 18-year-old Californian led the WHL with 41 wins, while also topping the charts with a 1.69 goals-against average and .936 save percentage. The budding netminder, who is eligible for the 2019 NHL Draft, is the first WHL player to claim the award since Josh Morrissey (Prince Albert Raiders) in 2013. Finalists for the Scholastic Player of the Year Award this year included Thomas Harley of the Mississauga Steelheads as well as Matthew Welsh of the Charlottetown Islanders. Watch

Janes Brian Kilrea Coach of the Year Award: Mario Pouliot, Rouyn-Noranda Huskies
Rouyn-Noranda Huskies head coach Mario Pouliot led his club to a franchise-record 59-win season in his first year behind the bench with his new team. He also guided the Huskies to a 25-win streak to tie a CHL record originally set in 1974. In all, Rouyn-Noranda finished the season in first place with a 59-8-0-1 record, good for 119 points. In the playoffs, the Huskies then captured the President’s Cup for the second time in four seasons. Pouliot is the first QMJHL head coach to win the Brian Kilrea Coach of the Year Award since Gillies Bouchard (Rouyn-Noranda Huskies) in 2016. Finalists this year included Marc Habscheid of the Prince Albert Raiders and Andre Tourigny of the Ottawa 67’s. Watch

Wawanesa Rookie of the Year Award: Quinton Byfield, Sudbury Wolves
2020 NHL Draft prospect Quinton Byfield of the Sudbury Wolves put together an incredible freshman campaign that saw him produce at nearly a point-per-game pace as he notched 29 goals and 32 assists across 64 appearances. The 16-year-old native of Newmarket, Ont., who was originally drafted first overall by the Wolves in the 2018 OHL Priority Selection, follows in the footsteps of Alexander Nylander (Mississauga Steelheads), who was the last OHL skater to win the Rookie of the Year Award in 2016.  He’s also just the second member of the Wolves to win following Benoit Pouliot in 2005. Finalists this year included Brayden Tracey of the Moose Jaw Warriors and Jordan Spence of the Moncton Wildcats. Watch

Vaughn Goaltender of the Year Award: Ian Scott, Prince Albert Raiders
Prince Albert Raiders goaltender Ian Scott had a banner year, winning 38 of his 49 appearances to help guide the Raiders to first place in the WHL and an eventual 16-7 playoff record that saw the club win its first Ed Chynoweth Cup since 1985. The regular season saw the 20-year-old Calgary native top the charts with eight shutouts, while the Toronto Maple Leafs draft pick also finished second league-wide in goals-against average (1.83) and save percentage (.932). For two years running, a WHL netminder has captured the Goaltender of the Year Award, with Scott’s win coming on the heels of Carter Hart (Everett Silvertips) in 2018. Finalists this year included Ukko-Pekka Luukkonen of the Sudbury Wolves as well as Samuel Harvey of the Rouyn-Noranda Huskies. Watch

Sportsnet Player of the Year Award: Alexis Lafreniere, Rimouski Oceanic
Rimouski Oceanic left-wing Alexis Lafreniere is the Sportsnet Player of the Year, just one season after he was recognized as the CHL’s Rookie of the Year. The 17-year-old product of St-Eustache, Que., who is a projected early selection in the 2020 NHL Draft, wrapped up the 2018-19 campaign with 37 goals and 68 assists for 105 points in only 61 appearances as he led his team in scoring and finished just six points shy of top spot in the QMJHL scoring race. Lafreniere is the second consecutive skater from the QMJHL to take home the award as he follows in the footsteps of Alex Barre-Boulet (Blainville-Boisbriand Armada) who won the Player of the Year Award in 2018. This marks the fourth time a member of the Oceanic has won following Brad Richards in 2000, and Sidney Crosby who won back-to-back in 2004-05. Finalists this year included Joachim Blichfeld of the Portland Winterhawks as well as Ukko-Pekka Luukkonen of the Sudbury Wolves. Watch