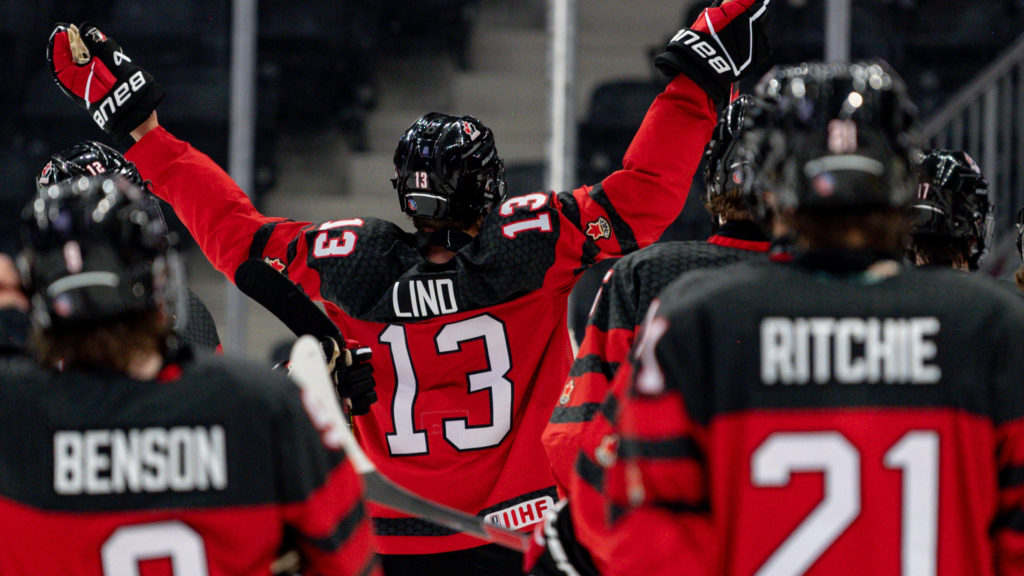 Canada, led by 22 CHLers, will look to claim gold at the Hlinka Gretzky Cup for the first time since 2018.

When the hosts hit the ice Sunday at The Peavey Mart Centrium in Red Deer, AB., it’ll be Canada’s first appearance in the tournament since 2019 when they lost 3-2 in the final to Russia.

The 2020 tournament was cancelled due to the Covid-19 pandemic while Canada elected to not take part in 2021 when the event was held in Europe.

Canada has been drawn into Group A and will face Slovakia, Sweden and Switzerland in the round-robin. Cam Allen of the Guelph Storm will captain a 23-man squad while Zach Benson (WPG), Jordan Tourigny (SHA) and Brayden Yager (MJ) will each wear an ‘A’.

Sherbrooke general manager and head coach, Stephane Julien, will lead from behind the bench as he will look to guide Canada to its 23rd gold medal at the tournament.

“It felt good tonight to pick up the win,” Lind said. “The boys were going, and our goalies were fantastic. Top to bottom I liked our effort. We have a few things to clean up before Sunday but I like where we are at as a group.”

Earlier in the week, the team split a two-games series against Canada’s National Junior Team camp squad that was brought together to begin preparation for the 2023 World Juniors in Halifax.

The Hlinka Gretzky squad won 6-4 Tuesday on the back of goals from six different players while Andrew Cristall (KEL) and Carson Rehkopf (KIT) each had one goal and one assist. The U20 group claimed a 3-1 victory Wednesday.

While Canada’s squad is dominated by CHL players, they aren’t the only team that has CHL representation. Quentin Musty (SBY) and Carey Terrance (ER) will suit up for the USA while Adam Zidlicky (KIT) will represent Czechia.

The 2022 Hlinka Gretzky Cup begins July 31 while the final will be contested Aug. 6. All games can be seen live on TSN while a complete tournament schedule can be found here.