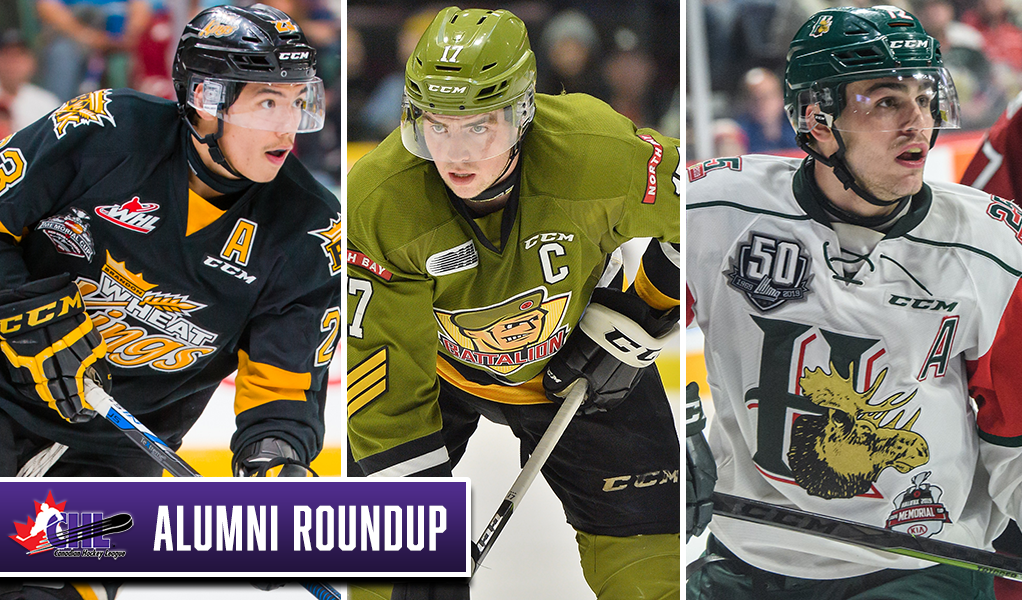 Sports remain on pause as a result of the COVID-19 pandemic but Canadian Hockey League alumni still found ways to stay active and in the news.

Here’s a look back at some of their highlights:

Reigning Norris Trophy winner Mark Giordano (Owen Sound Attack) of the Calgary Flames speaks for us all with words of support for healthcare workers and others on the frontlines keeping us safe. He also stresses the importance of hand washing and social distancing to help stop the coronavirus spread.

Another important message was delivered by Pittsburgh Penguins captain Sidney Crosby (Rimouski Oceanic) offering love and support to everyone in his home province of Nova Scotia affected by the violent tragedy that claimed the life of RCMP Constable Heidi Stevenson, among others.

Adding to the difficult times last month was the sad passing of Edmonton Oilers forward Colby Cave (Swift Current Broncos). The entire hockey world mourned the loss of the 25-year-old former WHL captain who had been placed in a medically-induced coma following surgery for a brain bleed.

Despite the tragedies and disappointments of being away from the rink, CHL alumni have done their best to stay optimistic, active, and through the power of social media have also found ways to entertain their fans by providing unique perspectives of every day life at home. Like Max Jones (London Knights) of the Anaheim Ducks who brings new meaning to #HockeyAtHome.

Max Jones (@Jones_Max19) is ready to go at ANY TIME. #HockeyAtHome

Max’s former teammate Mitch Marner (London Knights) of the Toronto Maple Leafs shows us he’s still working hard on his game with a little help from his dog. Detroit Red Wings prospect Joe Veleno (Drummondville Voltigeurs) and Phillip Danault (Moncton Wildcats) of the Montreal Canadiens are also keeping busy with a stick in their hand on the street and on some different ice.

Hockey players are a different breed these days pic.twitter.com/KGRN1KLGKY

Gotta get the work in at all costs. #HockeyAtHome

When it comes to social media, nobody has been better during the pandemic than Habs forward Brendan Gallagher (Vancouver Giants), specifically on the platform TikTok with entertaining videos like the one below.

.@BGALLY17 has really been working on his French. 😂

Even away from the rink the competitive spirit hasn’t been lost among 23 former CHL stars who make up nearly half of the NHL’s 50 participants going head-to-head in the league’s Player Gaming Challenge.

Another player in the spotlight is the charismatic P.K Subban (Belleville Bulls) who looks more comfortable than ever behind the camera in his role as host of NHL Hat Trick Trivia, a new weekly game show that welcomes special guests and features fan interaction focused around hockey trivia from home.

Everyone has a different story about how they’re coping during the pandemic or how they’re connected to frontline workers. But as we learn in this New York Islanders catch up story with Ryan Pulock (Brandon Wheat Kings) his thoughts are on his hometown more than ever where girlfriend Paige is an ER nurse.

.@rpulock has a special appreciation for the healthcare heroes working on the front lines. His girlfriend Paige is an ER nurse in Brandon, Manitoba. 💙 https://t.co/PJk2RA94Mw

Another New York Islander defenceman thinking about home is Noah Dobson. And by home we mean his home away from home during the first two years of his CHL career in Bathurst where he won a Memorial Cup title with the Titan. The NHL rookie recently shared a message for fans from in New York.

Another former captain with a message for Titan fans. This time it's @_ND53 checking in from New York!

The impact a CHL community has on a player’s life, even after they’re gone, is truly special. This is certainly the case for Jeff Skinner (Kitchener Rangers) who made quite the difference with his recent support for the Food Bank of Waterloo Region donating a symbolic $53,000 in honour of the number he proudly wore for the blueshirts.

There isn't enough room in this Tweet to list the 53 reasons we are honoured to have @JeffSkinner as an alumnus, but let’s start with his support of @FoodBankWatReg for the increased demand they are preparing for during this health crisis.

The Truro Peewee C Orange Bearcats of @HockeyNS got a big surprise from @Bmarch63, who dropped in on their team's year-end video call as part of their #HockeyComesTogether event.https://t.co/dSAcFyPCf7

NHL superstar Connor McDavid (Erie Otters) is trying to make a difference by inspiring fitness among fans of all ages with help from with his trainer Gary Roberts (Guelph Platers). McDavid posted several workouts throughout the month of April with exercises that can be completed at home.

Final workout of the month! Hope you guys enjoyed them. What would you like to see next? #stayhome #stayfit
•Single leg glute bridge x10
•Side plank 30sec/side
•Shoulder taps 10x/shoulder
•Back burn 5 times pic.twitter.com/GeAzbhNcOp

McDavid was also in the spotlight with another famous Edmonton Oilers captain when he joined Wayne Gretzky (Soo Greyhounds) for a unique one-on-one for GQ Magazine.

Turning the page now to some former NHL stars, two-time Stanley Cup champion Kris Vertseeg recently announced his retirement after 643 regular season games. The Lethbridge, Alberta, native played three full seasons with his hometown Hurricanes from 2002-05 before a final WHL season split between the Kamloops Blazers and Red Deer Rebels. The majority of his NHL career was spent as a member of the Chicago Blackhawks where he hoisted Lord Stanley in 2010 and 2015.

Another recent retiree is Joel Ward who enjoyed a successful career from unheralded beginnings. First going undrafted to the OHL where he played four seasons with the Owen Sound Attack, to playing at the University of Prince Edward Island, to making the jump to the AHL and then NHL despite being undrafted. Ward’s NHL career included 726 games over 11 seasons in Minnesota, Nashville, Washington, and San Jose.

Congrats on a great career, @JRandalWard42!

A look back on his journey from going undrafted to playing 726 career regular-season games in the NHL. ⬇️ #NHLStats pic.twitter.com/Ju0v5mOjdn

1990 Memorial Cup champion Eric Lindros (Oshawa Generals) has found something new to do during his own retirement. The Hall of Famer is returning to the Philadelphia Flyers where he spent the first eight seasons of his career to serve as the club’s community ambassador attending various events, fan appearances, and corporate partner engagements once the season resumes.

"I look forward to being back with my Flyers family and kicking things off in a way that makes a positive impact during a time of need.” –@88EricLindros on becoming an official team ambassador. https://t.co/iVsASSFdjj

To NHL hopefuls, 2016 third round pick Markus Niemelainen (Saginaw Spirit) has signed a two-year entry-level contract. The defenceman played two OHL seasons from 2015-17 before spending the last three years in his native Finland.

The 21-year-old just completed his third season in the Finnish SM-Liiga, posting one goal & six assists with @PorinAssat. pic.twitter.com/jXHd44Hhxn

The American Hockey League is also still on pause but did announce individual team winners of the IOA/American Specialty AHL Man of the Year awards for outstanding contributions to local community and charitable organizations during the 2019-20 season.

The AHL has announced the 31 team winners of the IOA/American Specialty AHL Man of the Year awards, chosen for their outstanding contributions to their community and charitable organizations this season.

While the balance of the 2019-20 AHL season remains in question, a trio of 2019 CHL grads including Morgan Frost (Soo Greyhounds), Joe Veleno (Drummondville Voltigeurs), and Alex Formenton (London Knights) were in news stories highlighting their impressive rookie campaigns.

From his @NHL debut with the @NHLFlyers to a trip to the #AHLAllStar Game, @LVPhantoms forward Morgan Frost had a memorable rookie season.

Young @DetroitRedWings prospect Joe Veleno has had an impressive first pro season with the @griffinshockey.

First year pro Alex Formenton has had an impressive rookie season with the @BellevilleSens.

In March it was announced that the balance of the 2019-20 East Coast Hockey League season would be cancelled. In April, the league began recognizing their annual award winners which featured a number of CHL graduates.

Defenceman of the Year was awarded to Alex Breton (Gatineau Olympiques) of the Allen Americans, while Spencer Watson (Mississauga Steelheads) of the Indy Fuel was named Most Sportsmanlike Player of the Year. Breton was also named a first team All-Star leading all defencemen with 55 points in 61 games. Miles Liberati (Kitchener Rangers) of the Tulsa Oilers was named a second team All-Star finishing second in points among defencemen with 46 in 56  games. Joining him at forward was Tim McGauley (Brandon Wheat Kings) of the Utah Grizzlies who scored 62 points in 49 games, and Jesse Schultz (Kelowna Rockets) of the Cincinnati Cyclones who scored 64 points in 62 games a year after earning league MVP honours.

Alex Breton of the @AllenAmericans named 2019-20 #ECHL Defenseman of the Yeaerhttps://t.co/HDw7JIpNNM

Two of the league’s most recent alumni were named to the ECHL All-Rookie team including Samuel Asselin (Halifax Mooseheads) of the Atlanta Gladiators and Justin Brazeau (North Bay Battalion) of the Newfoundland Growlers. Asselin finished the season tied for second among rookies with 26 goals and third with 52 points, while Brazeau led all rookies and was tied for fifth overall in the league with 27 goals in 57 games and finished second in rookie points with 55.

F Samuel Asselin has been named to the @ECHL All-Rookie Team!

Justin Brazeau has been named to the 2019-20 ECHL All-Rookie Team.