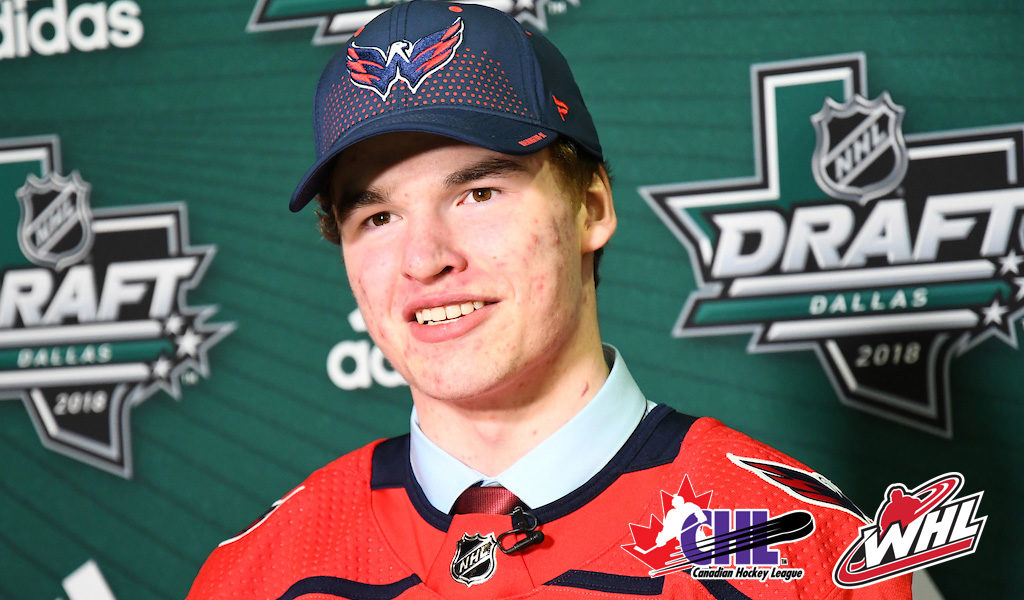 After a difficult season that included the loss of his mother, Red Deer Rebels rearguard Alexander Alexeyev was overwhelmed with emotion when the Stanley Cup Champion Washington Capitals concluded Friday night’s first round by calling his name at 31st overall.

Add to the thrill a FaceTime conversation with childhood hero Alexander Ovechkin and Alexeyev’s draft day experience was all he dreamed of and more.

“Someone gave me a phone, and there was Ovie’s face. I was so happy. He was just a nice guy. (He) congratulated me,” Alexeyev beamed in Dallas.

The first order of business for Alexander Alexeyev – make the @Capitals. https://t.co/XRUVVPbDAr

“I was watching highlights of him (as a kid) and playing PlayStation as him. Same thing with Kuzy (Evgeny Kuznetsov) and (Dmitry) Orlov. Watching them play in the World Juniors when they won and how they played in the NHL. Now it’s pleasure to be here because one day I’m going to meet them.”

The first of four WHLers chosen by Washington last month along with Everett’s Riley Sutter (3rd round, 93rd overall), Vancouver’s Alex Kannok-Leipert (6th round, 161st overall) and Eric Florchuk (7th round, 217th overall), Alexeyev made a good first impression at Caps Development Camp, scoring the 3-on-3 overtime winner to capture a mini-tournament championship for his team.

Though he was a key part of Red Deer’s second half surge to push the team into the WHL Playoffs, it was a trying season for Alexeyev whose mother passed away in late January, causing him to miss the Sherwin-Williams CHL/NHL Top Prospects Game and three weeks of action.

Needless to say, draft day took on a special meaning for the swift-skating 6-foot-4 defender.

“I just feel like it’s so much easier now,” he told the Red Deer Advocate’s Byron Hackett of being selected. “I feel like I deserve it from the stuff I’ve been through. Big weight off my shoulders and started being happy for myself and for my family who helped me on my way to this dream.

“(My mom) would be happy to see me in a Washington Capitals jersey and I wish she was there at the draft and saw me being happy. She would be happy, too.”

Alexeyev has returned home to St. Petersburg to spend time with family but plans to take a trip to California this summer before heading to Capitals Rookie Camp in the fall.

Beyond that, Alexeyev’s immediate fate remains up in the air. He’ll push for a shot to suit up with the Caps this fall, but a return to Red Deer for another year of development may well be in order.

“I don’t really like to talk about the future, but it is going to be fun,” Alexeyev said in Dallas. “I think I should work harder and every day get better and better, so we will see in September.”

Joining good company in past Rebels defencemen to be taken in the first round including Haydn Fleury (Carolina, 2014), Mathew Dumba (Minnesota, 2012) and Dion Phaneuf (Calgary, 2003), Alexeyev has the Capitals excited for what lies ahead.