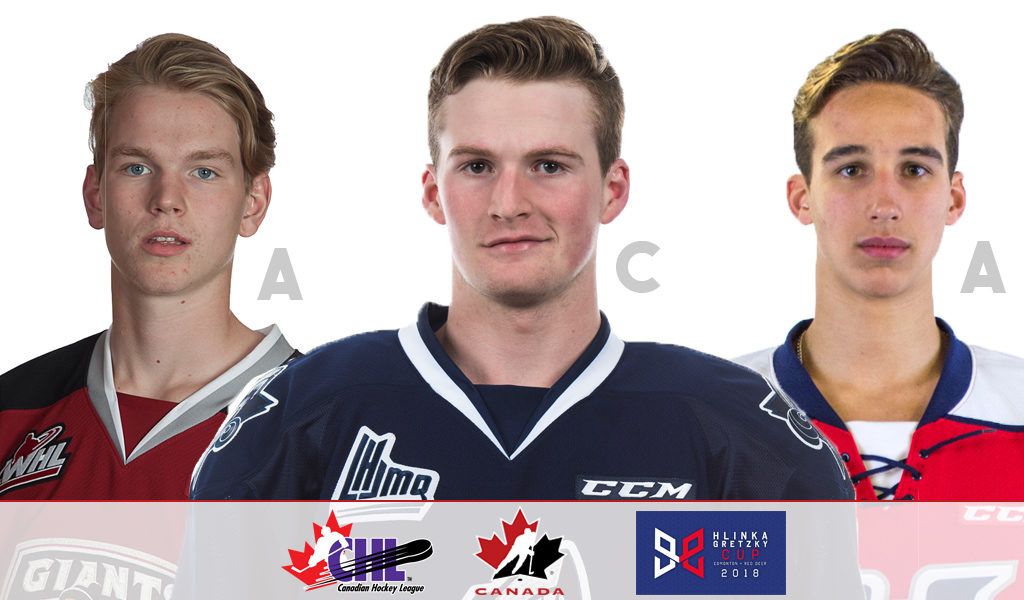 RED DEER, Alta. – Alexis Lafrenière (Rimouski Oceanic) will wear the captain’s ‘C’ for Canada’s National Men’s Summer Under-18 Team when it hits the ice in Edmonton on Monday in its first preliminary-round game of the 2018 Hlinka Gretzky Cup.

In addition to Lafrenière, defenceman Bowen Byram (Vancouver Giants) and forward Dylan Cozens (Lethbridge Hurricanes) were also named to the leadership group and will wear the ‘A’ as alternate captains.

“We have a tremendous amount of maturity and leadership across all 22 players on this team, and we feel that the mix of international experience and their overall professionalism in how they approach each and every task will allow Alexis, Bowen, and Dylan to continue to help drive our group’s focus on our team plan both on and off the ice as we kick off this best-on-best competition on Canadian ice,” said head coach André Tourigny of the leadership trio.

Lafrenière, named the QMJHL and the CHL rookie of the year following a stellar season that saw him represent Canada at the World Under-17 Hockey Challenge, and at the IIHF U18 World Championship in Russia in April, reunites with Team Canada Red teammates and fellow silver-medallists at the 2017 World Under-17 Hockey Challenge Byram, who finished second in scoring among WHL rookie defencemen and was part of the U18 worlds team that finished fifth, and Cozens, who led the WHL rookies in goals, winning the Jim Piggott Memorial Trophy as the WHL rookie of the year.

Canada’s National Men’s Summer Under-18 Team will play the Czech Republic in pre-competition action on Saturday, Aug. 4, at the new Servus Arena in Red Deer before moving on to Edmonton, where it opens the Hlinka Gretzky Cup against Switzerland on Monday, Aug. 6, at 7 p.m. MT. All tournament games played in Edmonton’s Rogers Place will be broadcast by TSN and RDS; check local listings for details.

Newly rebranded as the Hlinka Gretzky Cup, the annual tournament is one of the only true, best-on-best competitions.

Canada won last year’s edition of the event in Breclav, Czech Republic, besting the host team 4-1, with a squad that included 18 players who were selected in the 2018 NHL Entry Draft in June. When all of the picks were in, 77 alumni of the event were selected by NHL clubs – 19 first-rounders, in fact – including seven of the top-10 picks.

Fans can purchase a three-game Team Canada ticket package, which includes one lower-bowl ticket to each Team Canada preliminary-round game at Rogers Place, for only $99. Ticket packages and single-game tickets can be purchased online at HlinkaGretzkyCup.com.