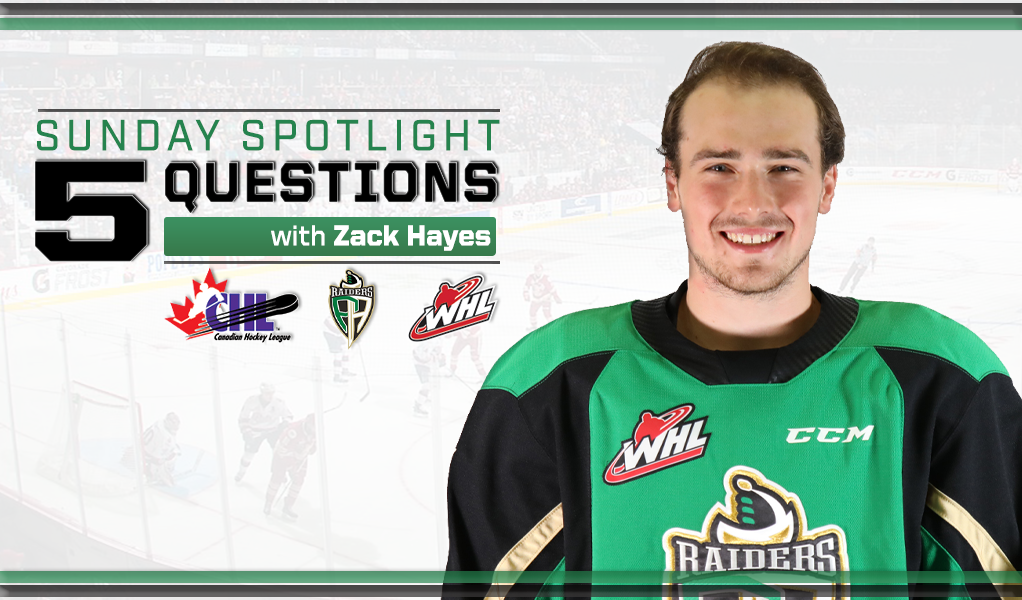 Zack Hayes is graduating from the Canadian Hockey League a champion.

Although it’s not quite the way he imagined given the disappointing cancellation of 2019-20 post-season action with his Prince Albert Raiders sitting atop the Western Hockey League’s East Division.

However the last time the 21-year-old defenceman from Calgary took the ice in playoff competition was a moment he’ll never forget, celebrating the team’s first Ed Chynoweth Cup since 1985 on home ice with a dramatic Game 7 overtime triumph over the Vancouver Giants one year ago.

Hayes returned to captain the team this season in his overage year and looks back fondly on a four-year career spent entirely with the Raiders where he amassed 79 points in 272 games and earned an American Hockey League contract with the Vegas Golden Knights organization.

He recently took time to connect with the CHL to reflect on his major junior days and what lies ahead.

How are you staying busy at home and what’s been your favourite program to watch?

To keep myself busy at home I’m doing a lot of workouts in my basement and then I have a shooting pad in my backyard that I can shoot pucks off of as well. And then in my spare time I’m either playing video games, hanging out with my family, or going up to the lake and going fishing. My favourite program to watch right now has got to be The Simpsons. I’m going to try and watch every episode now that I have a lot of time on my hands.

What do you think of when you reflect on the WHL championship?

When I think about our championship run last year there’s two things that really stick out to me. One is how hard we worked. From the beginning of the season to the championship run. That was brought in by our coaches. Nobody ever wanted to get out worked or out competed whether it was a practice or a game. And then the other thing that really stuck out to me was our togetherness and how close knit we were. That was the closest group I’ve ever been a part of. Everyone wanted to do everything together, whether it was go to a movie or hang out and play cards. We’re still very close today. Everyone still keeps in touch. We actually went on a Zoom call last week and watched Game 7 against Vancouver on YouTube so those were pretty good memories to relive with all of those guys.

How would you describe the Art Hauser Centre during Game 7 of the finals?

The atmosphere last year in Game 7 in the Art Hauser, it was the most electric, loudest, intense game I’ve ever been a part of. And it helps that it was fueled by the best fans in the CHL.

What will you miss the most about playing for the Raiders?

How does it feel to sign an AHL contract for next season?

I’m very excited to sign my first AHL contract with the Vegas Golden Knights. They’re a first class organization and I’m looking forward to the start of next season. I’ve been working hard with Prince Albert over the last four years to earn a professional contract. It’s been a dream of mine and it’s a step in the right direction to hopefully playing in the NHL one day.