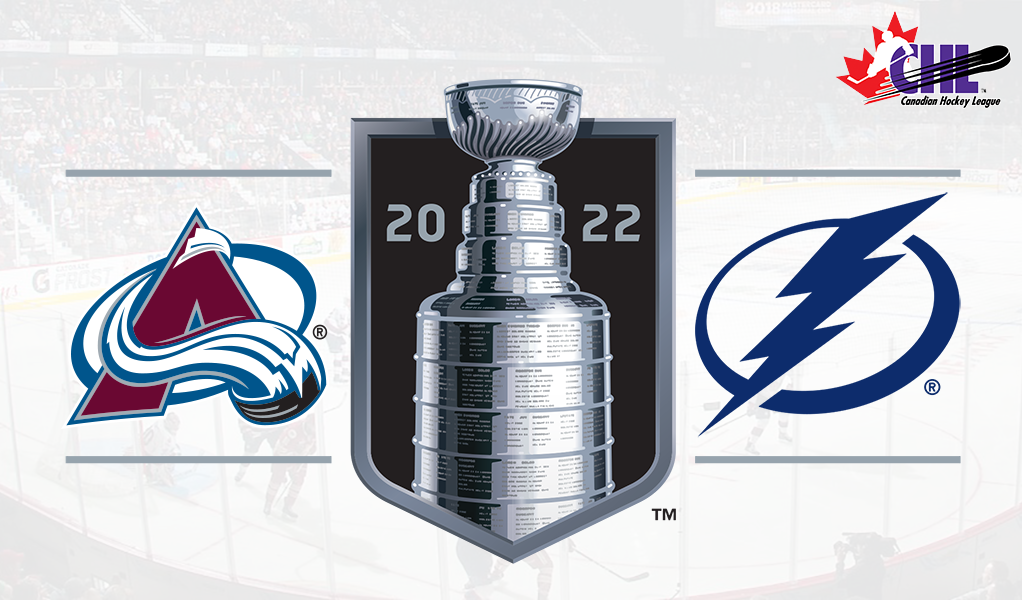 The 24 alumni split between the Colorado Avalanche (11) and Tampa Bay Lightning (13) counts 12 graduates from the Ontario Hockey League followed by seven from the Western Hockey League and five from the Quebec Major Junior Hockey League. In all, 18 CHL franchises are represented by at least one graduate headlined by the Erie Otters with four players. The London Knights (3) and Red Deer Rebels (2) also have multiple representatives:

Nicolas Aube-Kubel, Val-d’Or 2016: The trusted forward brings winning pedigree to the Avalanche lineup having previously won the President Cup with the Val-d’Or Foreurs in 2013-14.

Andre Burakovsky, Erie 2014: The Erie Otters graduate aims to raise the Stanley Cup for the second time after first doing so with the Washington Capitals in 2017-18.

Bowen Byram, Vancouver 2020: A top pick just three years ago, the Vancouver Giants alumni was dominant during his draft year as he led all WHL defencemen with 26 goals.

Samuel Girard, Shawinigan 2017: Bringing no shortage of offense from the back end, the Shawinigan Cataractes graduate twice led all QMJHL rearguards in points, doing so in 2015-16 and 2016-17.

Darren Helm, Medicine Hat 2007: The Medicine Hat Tigers graduate was dominant during the 2007 postseason, leading the team with 22 points in 23 games en route to an Ed Chynoweth Cup championship.

Darcy Kuemper, Red Deer 2011: The Avalanche added a supreme netminder in Kuemper whose resume counts CHL Goaltender of the Year honours coming during 2010-11 as part of the Red Deer Rebels.

Gabriel Landeskog, Kitchener 2011: Landeskog’s two seasons (2009-11) with the Kitchener Rangers were underscored by his dazzling freshman campaign that saw him earn a spot on the OHL First All-Rookie Team after putting up 46 points in 61 games.

Kurtis MacDermid, Erie 2015: The gritty forward had a breakout campaign in his final junior season as he finished ninth in Erie Otters’ scoring with a career high of 40 points.

Zach Bogosian, Peterborough 2008: The savvy veteran’s career began with the Peterborough Petes (2006-08) where over two seasons his honours included a spot on the 2007-08 OHL First All-Star Team.

Erik Cernak, Erie 2017: A winner at all levels, it began in the junior ranks for Cernak whose time with the Erie Otters included a J. Ross Robertson Cup win in 2016-17.

Anthony Cirelli, Erie 2017: Big-game heroics are no stranger for the two-way talent who as part of the Oshawa Generals netted the Memorial Cup-winning goal in overtime in 2015 before later joining the Otters.

Cal Foote, Kelowna 2018: Gifted at both ends of the ice, the former Kelowna Rockets rearguard was named to the WHL Western Conference First All-Star Team in 2017-18.

Nikita Kucherov, Rouyn-Noranda 2013: Spending a lone season with Quebec and Rouyn-Noranda in 2012-13, Kucherov showed a sign of what was to come as he dominated with 63 points through 33 appearances.

Patrick Maroon, London 2008: The London Knights graduate can capture his fourth-straight Stanley Cup after first doing so with the St. Louis Blues in 2019 followed by two in a row with the Lightning.

Ondrej Palat, Drummondville 2011: A key part of Tampa Bay’s forward makeup, Palat showed his offensive flair over two seasons in Drummondville highlighted by 2010-11 when his 96 points finished tied for the team lead.

Nicholas Paul, North Bay 2015: The North Bay Battalion graduate looks to add another big win to his resume after seeing success on the national stage where a year ago his game winner helped Canada claim gold at the World Championship.

Corey Perry, London 2005: A winner at every level, the Knights alumnus claimed an OHL championship and Memorial Cup with London in 2005 followed by plenty of NHL and international success.

Brayden Point, Moose Jaw 2016: A natural leader, Point had a breakout campaign in 2014-15 where as captain in Moose Jaw he led the squad with 87 points in 60 outings.

Mikhail Sergachev, Windsor 2017: The Russian-born blue-liner closed out his 2016 draft year in style where as part of the Windsor Spitfires he claimed the Max Kaminsky Trophy as the OHL’s most outstanding defenceman.

Steven Stamkos, Sarnia 2008: Regaining his offensive flair, the Lightning captain and Sarnia Sting graduate did it all during his junior career underscored by a spot on the 2007-08 CHL First All-Star Team.