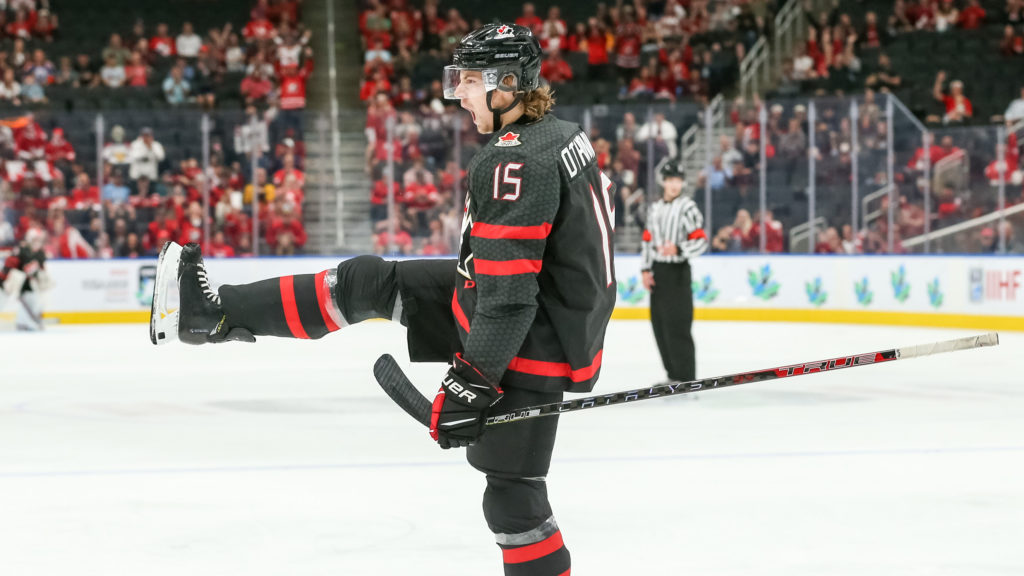 The quarterfinals are set for the 2022 World Juniors.

The seventh and final day of the round-robin concluded Monday as eight teams officially advanced while Austria and Slovakia were eliminated.

After their defeat to Canada Monday, Finland settled for second place in Group A and a clash with Germany. Finland’s 22 goals were tied for the second most in the round-robin although their 13 goals against are the fourth most among quarterfinal teams.

Germany finished third in Group B as they won two of their four round-robin contests and it marks the second straight year that they have qualified for the quarterfinals. Spokane’s Yannick Proske has tallied a team-high three assists while Haakon Hanelt (GAT) has a goal.

Sweden finished second in Group B with their only blemish a defeat to the USA in their finale. Fabian Lysell (VAN) has one goal and three assists while Oskar Olausson (OSH) is second in team scoring with five points.

For the first time in program history, Lativa will play in the quarterfinals of the World Juniors after they finished third in Group A after they beat Czechia in their final round-robin game. Bogdans Hodass (MC) has one goal and one assist while Harijs Brants (ACA), Niks Fenenko (BC) and Anri Ravinskis (BLB) all have one point.

Canada topped Group A with a perfect 4-0-0 record. Captain Mason McTavish (HAM) has been simply sensational as he leads the tournament in goals (7), points (13) and +/- (+11). Connor Bedard (REG) and Brennan Othmann (FLNT) each have three goals while eight players have tallied at least five points thus far. Canada’s 27 goals thus far are a tournament best.

Dylan Garand (KAM) has started the last three games for Canada where he has stopped 66 of the 71 shots he’s faced to boast a .929 save percentage and 1.67 GAA.

Switzerland were victorious Monday in a winner take all tilt with Austria to secure fourth spot in Group B. Halifax’s Attilio Biasca has led the way for Switzerland with four points (two goals) while Moncton’s Jonas Taibel has also chipped in with a pair of goals.

Like Canada, the USA had an unblemished 4-0-0 record in the round-robin to win Group B. Guelph’s Sasha Pastujov played at a point-per-game pace through the round-robin while Andrew Oke (SAG) saw 40 minutes of action in a 7-0 win over Austria where he collected the win.

Czechia’s round-robin ended in disappointment after a surprising loss to Latvia but their quarterfinal berth had already been confirmed before puck drop. Captain Jan Mysak (HAM) has paced the Czechs with three goals and five points while WHLers Michal Gut (EVE) and Stanislav Svozil (REG) each have one goal and two assists.

McTavish has been simply sensational this tournament while Bedard has continued to show why he should be the first overall pick in the 2023 NHL Draft.

Canada’s captain owns a staggering 41.2 shooting percentage while the Pats forward has a tournament high 22 shots. The pair are a combined +19 in four games.

But while there’s no wrong choice across the board, we’ll focus on Olen Zellweger. The Everett defenceman leads all Canadian blueliners with six points (two goals) in four games while his +10 rating trails only McTavish for the tournament lead.

His fantastic World Juniors comes off the heels of an exceptional season where he had 14 goals and 78 points in just 55 games and won the Bill Hunter Trophy as the WHL’s Top Defenceman.

Biasca scored the game-winner for Switzerland as they secured their berth in the quarterfinals with a 3-2 win over Austria. Tabiel also got on the scoresheet for the Swiss who return to the quarters after missing out in 2021.

Canada were tested by the Finns but came through with a 6-3 victory primarily due to a 5-1 lead they had built through 40 minutes.

McTavish and Zellweger each had three points while Bedard set the hockey world on fire as he demonstrated his NHL-ready wrist shot with a lethal finish past Merilainen.

Sweden secured second spot over Germany in Group B with a 4-2 win over their fellow Europeans. Olausson scored his first of the tournament, a power play marker in the first, while Lysell added an assist.