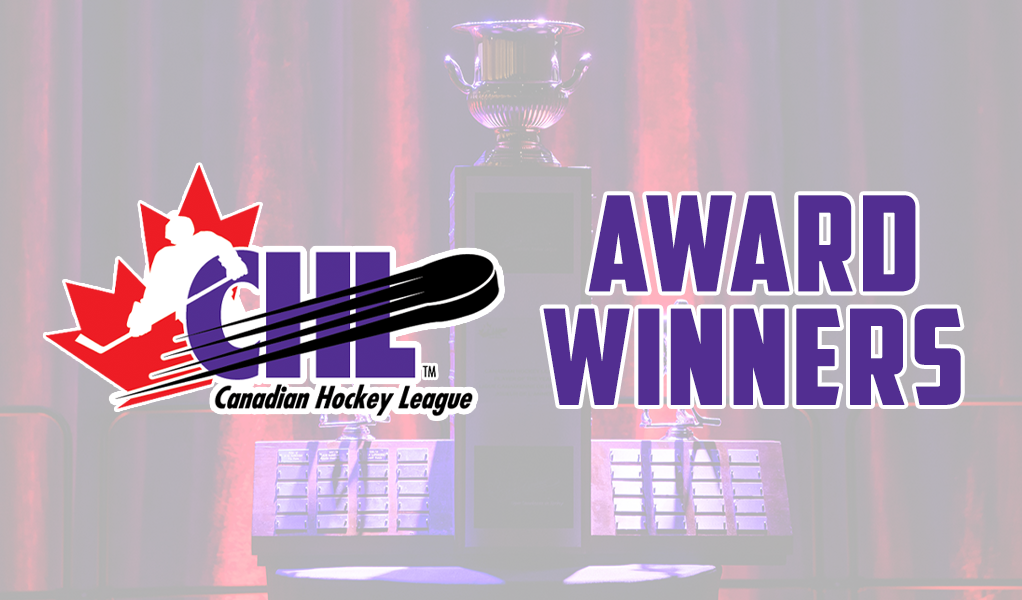 The Canadian Hockey League is proud to announce the recipients of 10 major individual awards for the 2019-20 season that were revealed in a series of digital presentations between May 28 and June 10.

Headlining the list of winners is Rimouski Oceanic captain Alexis Lafreniere who was awarded Top Draft Prospect as well as Player of the Year honours for a second straight season. The Ottawa 67’s were the most represented team with three winners including Defenceman of the Year Noel Hoefenmayer, Coach of the Year Andre Tourigny, and Top Scorer Marco Rossi.

With help from our friends at Purolator, watch as we surprised Lafreniere with the CHL David Branch Player of the Year trophy at his home in Saint-Eustache.

Lafreniere was chosen most outstanding after scoring 112 points including 35 goals and 77 assists in 52 games for the league’s highest point-per-game rate of 2.15 which is the best since Connor McDavid of the Erie Otters scored at a 2.50 pace in 2014-15.  The top ranked North American skater for the 2020 NHL Draft becomes just the second back-to-back recipient in league history following fellow Oceanic forward Sidney Crosby in 2004 and 2005.

Defenceman of the Year Award presented by Real Canadian Superstore:

Hoefenmayer led all CHL defencemen with 26 goals and 82 points over 58 games while his 56 assists and plus-52 rating each ranked second at the position.

Goaltender of the Year Award presented by Vaughn:

Wolf led all CHL goaltenders with a 1.88 goals-against-average, a .935 save percentage, nine shutout victories, and finished the season tied for second in overall wins compiling a 34-10-2-0 record.

Rookie of the Year Award presented by Wawanesa Insurance:

Wright led all CHL rookies in scoring with 66 points including 39 goals and 27 assists in 58 games competing as the league’s youngest and only full-time 2004-born player after being granted exceptional status by Hockey Canada.

Sportsman of the Year Award presented by Cavendish Farms:

Robertson led the entire CHL with 55 goals in just 46 games played while adding 31 assists for a total of 86 points along with 40 penalty minutes.

Scholastic Player of the Year Award presented by CIBC:

Perfetti combined success on the ice with success in school by setting a Spirit single season scoring record of 111 points including 37 goals and 74 assists over 61 games while achieving an overall academic average of 93%.

Humanitarian of the Year Award presented by Kia:

Simoneau led his team on and off the ice by scoring 89 points counting 28 goals and 61 assists in 61 games while serving his community through a number of initiatives that included the development of his own outreach program called ‘Les amis à Simy’.

Brian Kilrea Coach of the Year Award presented by Janes:

Tourigny guided the 67’s to a second straight Ontario Hockey League regular season title with a of 50-11-0-1 record, a CHL leading 296 goals scored, and just 164 goals against which was fewest in the OHL.

Lafreniere, who led the Quebec Major Junior Hockey League in scoring with 112 points including 35 goals and 77 assists in 52 games, is the top North American skater in NHL Central Scouting’s final rankings for the 2020 NHL Draft.

Rossi led all players with 120 points including 39 goals and 81 assists in 56 games helping the 67’s finish first in the Ontario Hockey League’s regular season standings for the second straight season.

Each of the CHL’s 10 major awards had three finalists representing nominations from the Western Hockey League, Ontario Hockey League, and Quebec Major Junior Hockey League. Award winners were selected by NHL Central Scouting in association with the CHL.