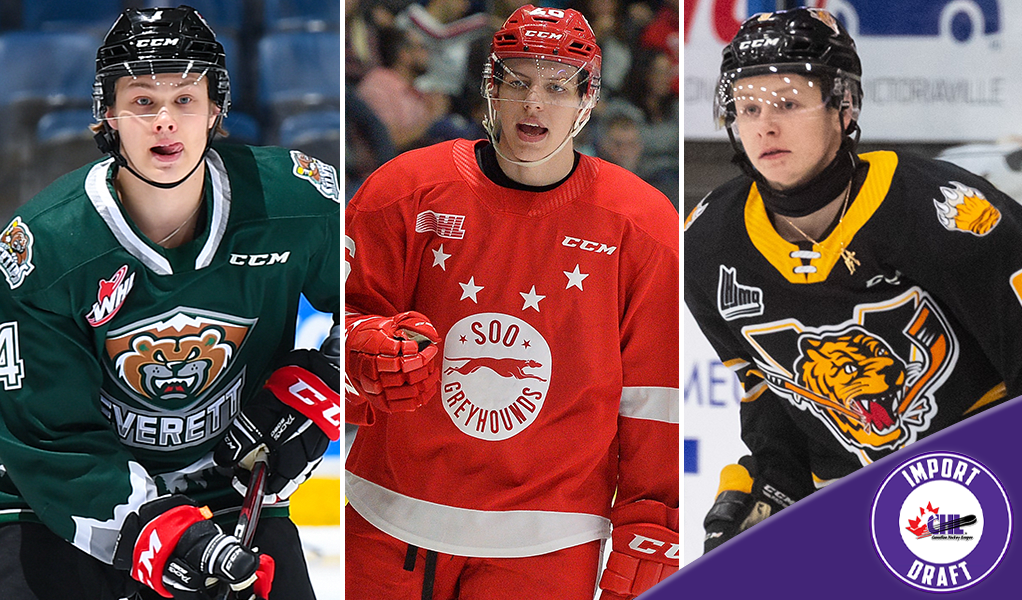 While the CHL Import Draft offers clubs a chance to add international flavour to their lineups, this summer saw 10 teams retain their existing foreign-born talent.

Beginning in the WHL, both the Everett Silvertips and Portland Winterhawks passed on both of their selections in the 2020 CHL Import Draft.

For the Silvertips, that meant retaining Czech-born centre Michal Gut who impressed as a rookie in collecting 36 points through 51 appearances as well as Finnish blue-liner Kasper Puutio, the top pick from the 2019 CHL Import Draft who following his midseason acquisition from the Swift Current Broncos posted 12 points in 21 games.

In Portland, the Winterhawks held on to a pair of freshmen in Swiss right-wing Simon Knak whose season totaled 34 points in 49 games as well as Danish blue-liner Jonas Brondberg who put up 22 points in 50 games to rank fourth among first-year WHL rearguards.

In the OHL, a trio of clubs including the Guelph Storm, Kingston Frontenacs, and Soo Greyhounds sat out the 2020 CHL Import Draft.

No selections were required by the Storm who instead opted to retain Russian right-wing Andrei Bakanov whose debut season counted 11 goals and 12 assists for 23 points through 55 games. On the back end, Guelph also kept Czech-born Washington Capitals prospect Martin Has who tallied six assists in an abbreviated 20-game showing.

The Frontenacs retained two forwards including Belarusian left-wing Vitali Pinchuk who impressed in his first season with 34 points in 54 games. Additionally, Kingston will return Slovakian left-wing Martin Chromiak, the second overall selection from the 2019 CHL Import Draft who scored above a point-per-game pace in tallying 11 goals and 22 assists through 28 appearances since joining the Frontenacs in January.

Rounding out the OHL, the Greyhounds retained a pair of players, headlined by Czech-born centre Jaromir Pytlik, a 2020 NHL Draft eligible who ranks 46th among North Americans per NHL Central Scouting after putting up 50 points in 56 games. Between the pipes, the Soo also kept Czech netminder Nick Malik who put together a 5-11-0-0 showing and .886 save rate through 16 appearances in 2019-20.

Two Russian-born forwards in right-wing Maxim Bykov and left-wing Yaroslav Likhachev will return to the Armada next season. Bykov was one of four players to reach the 20-goal plateau in Blainville-Boisbriand in 2019-20 while Likhachev dazzled in his second season scoring 62 points across 60 contests.

A pair of Austrian countrymen in right-wing Fabian Hochegger and blue-liner Thimo Nickl will return to the Voltigeurs next season. While the former picked up 19 points through 56 games with Drummondville last season, the latter finished third among QMJHL rookie rearguards in registering 39 points in 58 appearances. A participant in the 2020 Kubota CHL/NHL Top Prospects Game, Nickl is earmarked for selection in the 2020 NHL Draft and ranks 74th among North American skaters per NHL Central Scouting.

In Val-d’Or, the club looks forward to welcoming Slovakian right-wing Maxim Cajkovic as well as returning Russian left-wing Alexander Mirzabalaev. For Cajkovic, a 2019 third-round selection by the Tampa Bay Lightning, he joins the Foreurs after spending the past two campaigns with the Saint John Sea Dogs following his first overall selection in the 2018 CHL Import Draft. Meanwhile, Mirzabalaev will look to build on his 28-point freshman showing in 2019-20.

Lastly, the Tigres will bring back a pair of NHL prospects next season, including Russian-born centre Mikhail Abramov, a 2019 fourth-round selection by the Toronto Maple Leafs who led Victoriaville in scoring last season with 76 points in 63 games. Also returning is Philadelphia Flyers up-and-comer Egor Serdyuk, a Russian right-wing who put up 40 points through 50 games in 2019-20.