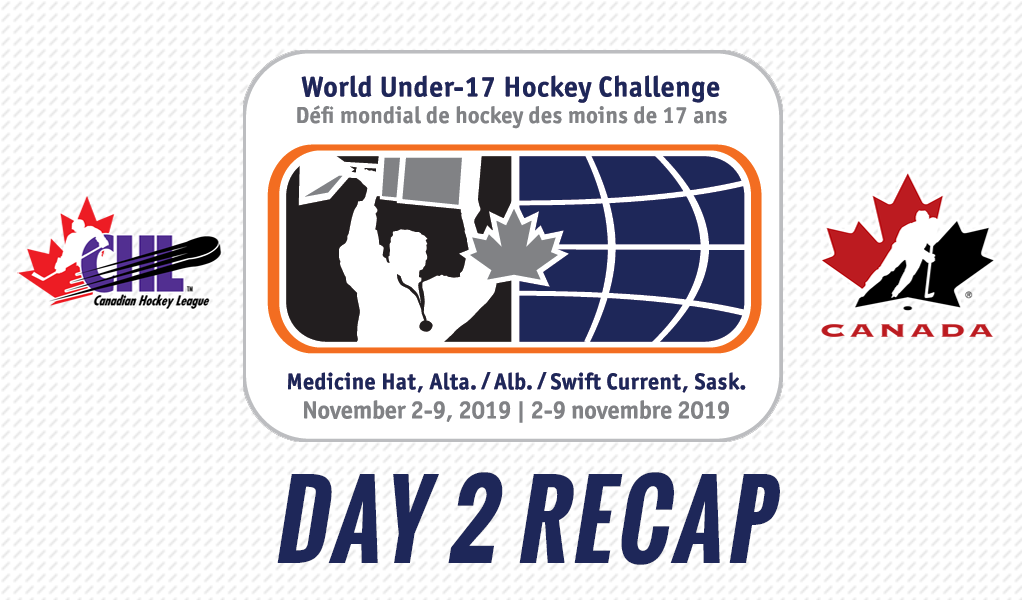 The action continued at the 2019 World Under-17 Hockey Challenge on Monday with three Canadian squads hitting the ice:

Czech Republic 4 vs. Canada Black 5 SO

Canada Black has stayed perfect at the annual tournament thanks to a 5-4 win over the Czech Republic.

For the second straight game, Canada Black required extra time in going to the shootout where blue-liner Brandt Clarke of the Barrie Colts played the hero to seal the victory.

Also leading the way for the Canadian squad was Guelph Storm forward Danny Zhilkin who found the back of the net twice, including the game-tying goal with less than two minutes remaining, while Moose Jaw Warriors prospect Corson Ceulemans also decorated the scoresheet with a pair of points. Between the pipes, Val-d’Or Foreurs up-and-comer William Blackburn turned aside 22 shots to pick up the victory.

Canada Black will now look to continue its winning ways on Tuesday against the United States.

After finding the win column in their first outing, Canada Red suffered a hard-battled loss to the Swedes in their second showing.

Following a scoreless first period, Sweden captured a two-goal lead with a pair of tallies in 47 seconds. The lead did not hold however as Canada Red found quick offense of its own as Erie Otters forward Connor Lockhart and Saint John Sea Dogs freshman Joshua Roy found the back of the net in a 14-second span to close out the middle frame.

Despite outshooting the opposition in the third period, Canada Red surrendered another two goals, including one power play marker as well as an empty netter to give Sweden a 4-2 victory. While he didn’t end the night with a win, Charlottetown Islanders goaltender Jacob Goobie impressed in the blue paint as he put up a 30-save effort.

Canada Red will look to respond Tuesday in its next preliminary showing against Finland.

A comeback bid by Canada White fell short in its latest preliminary contest against the United States.

After trailing 3-1 following first period action that drew a goal from Acadie-Bathurst Titan forward Riley Kidney, Canada White found the back of the net twice in the middle frame on goals by Ottawa 67’s forward Jack Beck and Medicine Hat Tigers rookie Cole Sillinger, who would add his second tally a period later. The offensive spark wasn’t enough however as the United States added two goals of its own to maintain its lead into the second intermission.

Both sides would again find the back of the net in the third period as the United States eventually prevailed with a 6-4 victory.

Canada White looks to get back to the win column Tuesday against the Czech Republic.