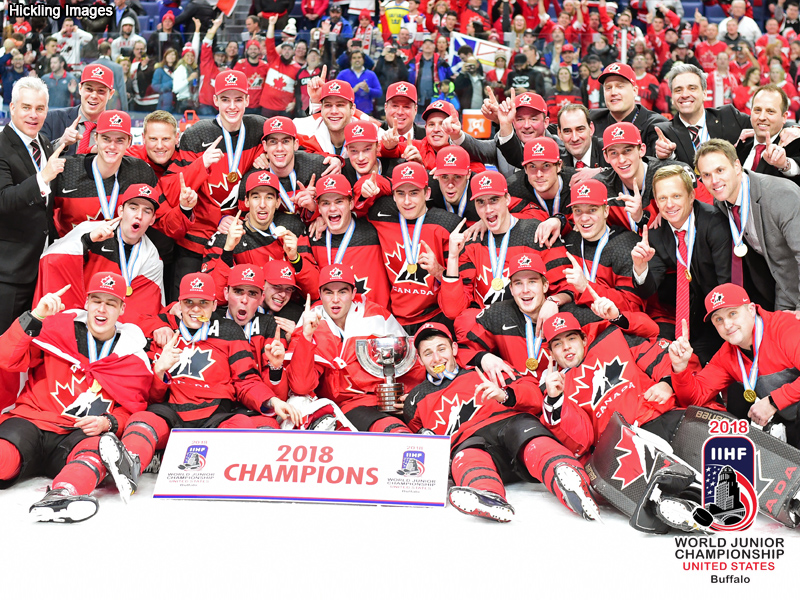 Buffalo, NY – A total of 18 CHL players are World Junior Hockey Championship gold medalists as members of Team Canada in Buffalo following a 3-1 win over Sweden in Friday’s Gold Medal Game before a sea of red at the Key Bank Center.

The annual tournament featured a total of 58 CHL players competing for gold, with Canada emerging victorious following a thrilling finish in Buffalo.

The 3-1 win over Sweden before an energetic crowd of 17,544 featured a 35-save performance from Player of the Game Carter Hart (Everett Silvertips) as Canada returns to the top of the podium three years after winning gold at the 2015 World Juniors in Toronto.

Steenbergen’s game winner gave every Canadian forward a goal in the tournament, one that the Arizona Coyotes prospect scored at the perfect time.

“Guys were giving me grief all tournament for not scoring but I’m sure they’re pretty happy right now,” Steenbergen told TSN post-game. “It’s an unbelievable group of guys and there’s nothing like the feeling of winning gold.”

Sweden outshot Canada 36-28 as Tim Soderlund provided the lone goal in the loss shorthanded with 6:53 left in the second.

Sweden takes home its 11th silver medal in tournament history, giving the country a total of 18 dating back to 1977.

Canada takes home gold for the 17th time, contributing to an overall total of 31.

*- won silver at the 2017 World Juniors in Montreal

Victor Mete is a graduate of the London Knights

The New York Islanders prospect joined teammate Trent Frederic in fuelling the Americans to an 9-3 win over the Czech Republic, giving them medals at three consecutive World Junior tournaments for the first time ever.

Frederic netted four goals while Ryan Poehling, Joey Anderson and Patrick Harper also found the back of the net. The U.S. climbed out to an 8-0 lead with six in the second period before the Czechs clawed back with three of their own in the third.

Martin Kaut, Radovan Pavlik and Daniel Kurovsky found the scoresheet while Libor Hajek (Saskatoon Blades) and Ondrej Vala (Kamloops Blazers) had assists as the Czech Republic outshot the Americans 22-11 in the final frame.

For full coverage of the 2018 IIHF World Junior Hockey Championship visit the IIHF or HockeyCanada.ca.