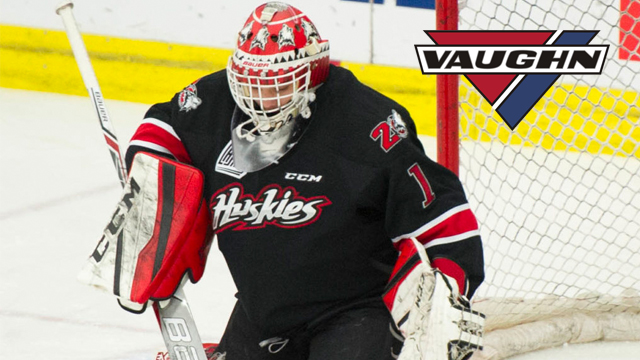 Toronto, ON – The Canadian Hockey League today announced that Samuel Harvey of the Rouyn-Noranda Huskies is the Vaughn CHL Goaltender of the Week for the week ending January 7 after posting a 2-0-0-1 record including one shutout with a goals-against-average of 0.65 and save percentage of .979.

Harvey stopped 92 of 94 shots faced last week helping the Huskies ring in the new year with five of a possible six points to keep pace in the QMJHL standings carrying an overall record of 24-10-4-3 and just two points shy of first place.  On Thursday he recorded his third shutout of the season and tenth of his career with 26 saves as first star of a 3-0 road win against the Victoriaville Tigres.  Harvey and the Huskies finished the week at home with a 3-1 victory over the Gatineau Olympiques on Saturday and a 2-1 shootout loss to the Drummondville Voltigeurs on Sunday with the netminder producing 24 and 42 save performances respectively and earning second star honours in both games.

A 19-year-old from Alma, Quebec, Harvey is now a two-time recipient of the CHL’s weekly award this season.  The fourth year goaltender has been a member of the Huskies since being chosen by the club in the second round of the 2014 QMJHL Entry Draft and has appeared in 141 games in that time.  This season he leads the QMJHL with a goals-against-average of 2.13 and save percentage of .930 and holds a 21-5-3-2 personal record.