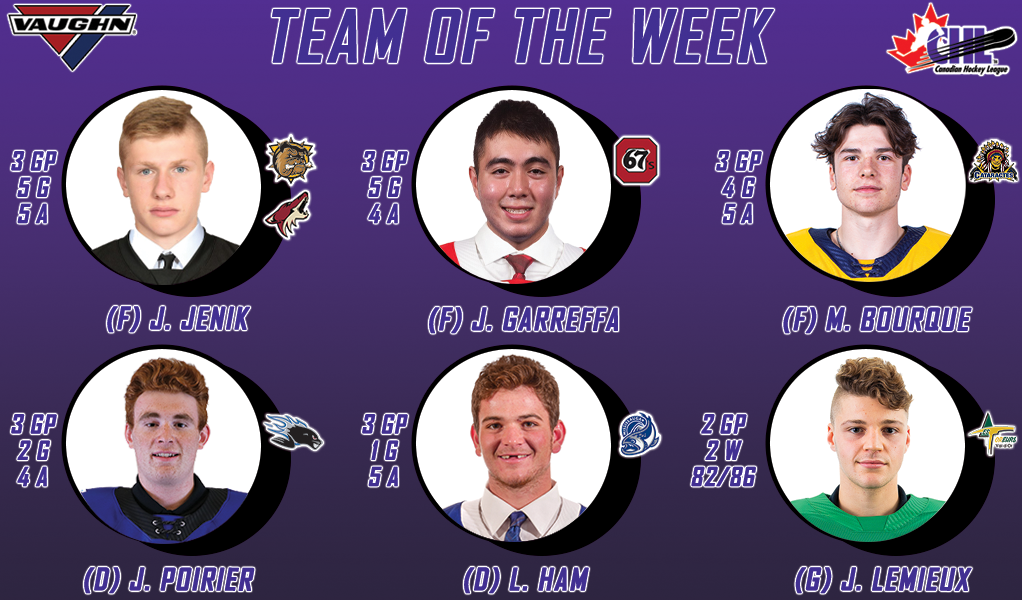 The Canadian Hockey League today announced the ninth edition of the Vaughn CHL Team of the Week for the 2019-20 season based on individual performances from Nov. 11-17.

Leading the forward ranks is Hamilton Bulldogs centre Jan Jenik, whose week totaled 10 points counting five goals and five assists over three contests. Jenik, who carries a CHL best point-streak with at least one point in all 20 of his appearances this season, put up his best showing this week with a five-point night against the North Bay Battalion on Thursday in which he finished with a hat-trick plus two assists en route to a 5-1 victory and first-star honours. For his efforts, the Arizona Coyotes prospect was recognized as the OHL ‘On the Run’ Player of the Week.

Also up front is Ottawa 67’s overage left-wing Joseph Garreffa, who wrapped up the week with five goals and four assists for nine points across three appearances. Currently riding a four-game point streak, Garreffa had a productive weekend in first posting a hat-trick and one assist in Saturday’s 4-2 victory over the Flint Firebirds before following up that effort the next night in recording two goals and two assists to guide his club to a 6-3 win versus the Sarnia Sting and pick up his second-straight first-star honour.

Rounding out the forward ranks is Shawinigan Cataractes centre Mavrik Bourque who recorded nine points counting four goals and five assists over three appearances. The 2020 NHL Draft hopeful, who projects as a second-round selection in NHL Central Scouting’s latest Players to Watch report, is currently riding a 10-game point streak, a stretch which includes Tuesday’s five-point finish against the Saint John Sea Dogs in which he tallied one goal and four assists in the 8-5 victory that saw him claim second-star honours. For his efforts, Bourque was named the Ultramar QMJHL Player of the Week.

The blue line is led by another 2020 NHL Draft eligible in Sea Dogs rearguard Jeremie Poirier, whose productive week saw him finish with six points counting two goals and four assists over three appearances. Against the Cataractes on Tuesday, Poirier impressed with a power play goal plus three assists to claim third-star honours. The Quebec native projects as a first-round selection in the coming NHL Draft in Montreal.

Joining the back end is Mississauga Steelheads veteran defenceman Liam Ham who wrapped up the week with one goal and five assists for six points over three contests. Against the Sting on Friday, the Newmarket, Ont., native came up big in collecting four points – all coming as assists – that helped guide his club to a 6-2 victory in a performance that recognized him with third-star honours.

Between the pipes, Val-d’Or Foreurs netminder Jonathan Lemieux shined in two appearances and 125 minutes of action that saw him turn aside a combined 82 shots for back-to-back victories over the Sea Dogs and Halifax Mooseheads. Lemieux was busiest against the Sea Dogs, stopping 49 of 52 shots to lead his club to a 7-3 victory that also saw him earn second-star honours. In all, Lemieux wrapped up the week with a 1.92 goals-against average and .953 save percentage.