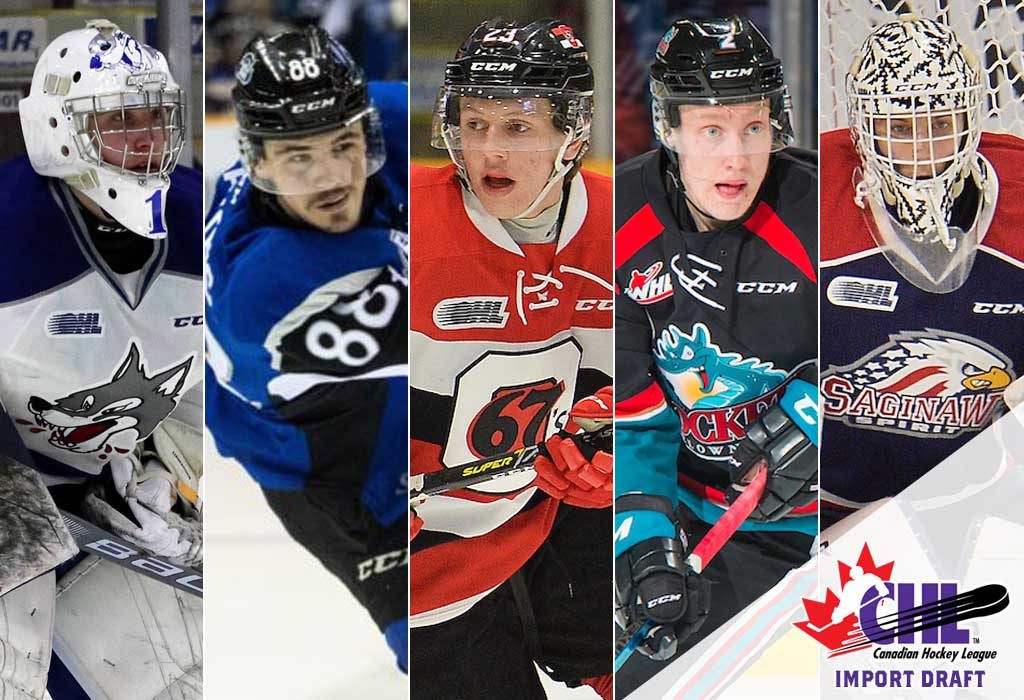 The CHL Import Draft provides a unique opportunity for non-North American players to compete in the Canadian Hockey League.

With the 2019 CHL Import Draft kicking off Thursday, it offers a chance to look back at last year’s class and which players provided plenty of highlights in their debut season in 2018-19:

After being selected in the second round of the 2017 NHL Draft by the Buffalo Sabres, the Sudbury Wolves called the name of Finnish netminder Ukko-Pekka Luukkonen with the third-overall selection in the 2018 CHL Import Draft.

#OHL Player of the Year 🐺

Luukkonen is first @Sudbury_Wolves Red Tilson Trophy winner in 40 years and just the sixth goaltender to be recognized for the prestigious individual award since 1945.

In his first season with the Wolves, Luukkonen set a franchise record with 38 wins in 53 appearances. In all, he wrapped up his freshman year with an OHL-leading .920 save percentage, earning him a spot on the OHL First All-Star Team and recognition as the OHL Goaltender of the Year. The 20-year-old also took home the Red Tilson Trophy as the OHL’s Most Outstanding Player.

Just days after being selected in the fourth round of the 2018 NHL Draft by the Arizona Coyotes, Russian netminder Ivan Prosvetov was made the 15th overall selection by the Saginaw Spirit and the second goaltender off the board in the 2018 CHL Import Draft.

In 53 games in 2018-19, the 20-year-old posted a 36-11-2-1 record, counting four shutouts and a .910 save percentage. To begin 2019, he was recognized as the Vaughn CHL Goaltender of the Week after he won three consecutive games in which he allowed just three goals on 96 shots. At season’s end, Prosvetov was named a finalist for the OHL Goaltender of the Year Award.

Eligible for the 2020 NHL Draft, Ottawa 67’s forward Marco Rossi gave talent evaluators a sneak peek during the 2018-19 campaign after being selected 18th overall in the 2018 CHL Import Draft.

A part of a 67’s squad that finished with a franchise-record 106 points, Rossi wrapped up the season in fourth place in team scoring with 65 points in 53 appearances, then added another 22 points in the playoffs. In all, it helped the Austrian-born forward earn a spot on the OHL Second All-Rookie Team.

A hectic season for Lassi Thompson saw its latest chapter last weekend as the budding blue-liner was chosen 19th overall by the Ottawa Senators in the 2019 NHL Draft as he became the first player from the 2018 CHL Import Draft (drafted 53rd overall) to be selected into the NHL.

In his first season with the Kelowna Rockets, the Finnish defenceman finished fourth in team scoring and led all Rockets rearguards with 41 points in 63 games as he was named to the WHL Western Conference Second All-Star Team.

With the top pick in the 2018 CHL Import Draft, the Saint John Sea Dogs called the name of Slovakian right-wing Maxim Cajkovic.

In just his first season with the club, Cajkovic led the Sea Dogs in scoring with 22 goals and 24 assists in 60 games, a performance that captured the attention of the scouting community as he was drafted by the Tampa Bay Lightning in the third round of the 2019 NHL Draft.

The Russian duo of Egor Serdyuk and Mikhail Abramov dazzled for the Victoriaville Tigres this season, finishing first and third in team scoring with 65 and 54 points, respectively.

In Serdyuk, selected 37th overall by the Tigres in 2018, the first-year forward led all QMJHL rookies in goals and points, earning him a spot on the QMJHL All-Rookie Team. This past weekend, he then heard his name called by the Philadelphia Flyers in the sixth round of the 2019 NHL Draft.

As for Abramov, who was drafted 97th overall by Victoriaville, he wrapped up his debut season in being named to the QMJHL All-Rookie Team alongside Serdyuk. The 2019 NHL Draft saw the Toronto Maple Leafs select Abramov in the fourth round.

Alexander Khovanov (Moncton Wildcats) – The Russian forward excelled in his first season with the Wildcats, finishing just shy of a point-per-game pace as he tallied nine goals and 19 assists in 29 appearances, coming on the heels of his second-overall selection in the 2017 CHL Import Draft. The performance led to Khovanov’s selection by the Minnesota Wild in the third round of the 2018 NHL Draft.

Adam Boqvist (London Knights) – Taken by the London Knights with the 109th pick in the 2017 CHL Import Draft, Boqvist joined the junior club following his eighth-overall selection by the Chicago Blackhawks the following year. The 2018-19 campaign saw the Swedish-born Boqvist register 20 goals and 40 assists for 60 points – before adding another 10 goals and three assists in 11 playoff appearances – as he earned a spot on the OHL Second All-Star Team.

Second Round #CHL Playoffs Spotlight:@NHLBlackhawks prospect @BoqvistAdam the latest budding star to suit up for @GoLondonKnights.

Milos Roman (Vancouver Giants) – The sixth selection in the 2017 CHL Import Draft, the Slovakian forward was an immediate performer with the Giants, putting up 32 points in 39 games, ultimately leading to his fourth-round selection by the Calgary Flames in the 2018 NHL Draft.

Dmitri Samorukov (Guelph Storm) – The No. 2 pick in the 2016 CHL Import Draft, Samorukov stepped into the lineup immediately with the Guelph Storm and has made steady progress each season since. His debut year in 2016-17 saw the budding Russian blue-liner notch 20 points in 67 games before culminating in a J. Ross Robertson Cup championship in 2019. Samorukov was a third-round pick by the Edmonton Oilers in the 2017 NHL Draft.

Joachim Blichfeld (Portland Winterhawks) – With the penultimate pick in the 2016 NHL Draft, the San Jose Sharks seemingly made a savvy pick in Blichfeld, the Danish import who turned heads this season after he claimed the Bob Clarke Trophy as the WHL’s leading point producer in notching 53 goals and 114 points. He was also named to the WHL Western Conference First All-Star Team and was presented with the Four Broncos Trophy as the WHL Player of the Year. The Winterhawks originally selected Blichfeld with the 85th pick in the 2016 CHL Import Draft.

The winner of the Four Broncos Memorial Trophy as WHL Player of the Year is @SanJoseSharks prospect @joachimblich of @pdxwinterhawks! #WHLAwards pic.twitter.com/dVXk0f4SvA

Ivan Chekhovich (Baie-Comeau Drakkar) – The third-overall pick in the 2016 CHL Import Draft, the Russian-born Chekhovich exploded on to the scene with the Drakkar, wrapping up his first season in 2016-17 just short of a point-per-game pace as he recorded 26 goals and 33 assists in 60 contests. The Sharks liked what they saw as they selected Chekhovich in the seventh round of the 2017 NHL Draft.