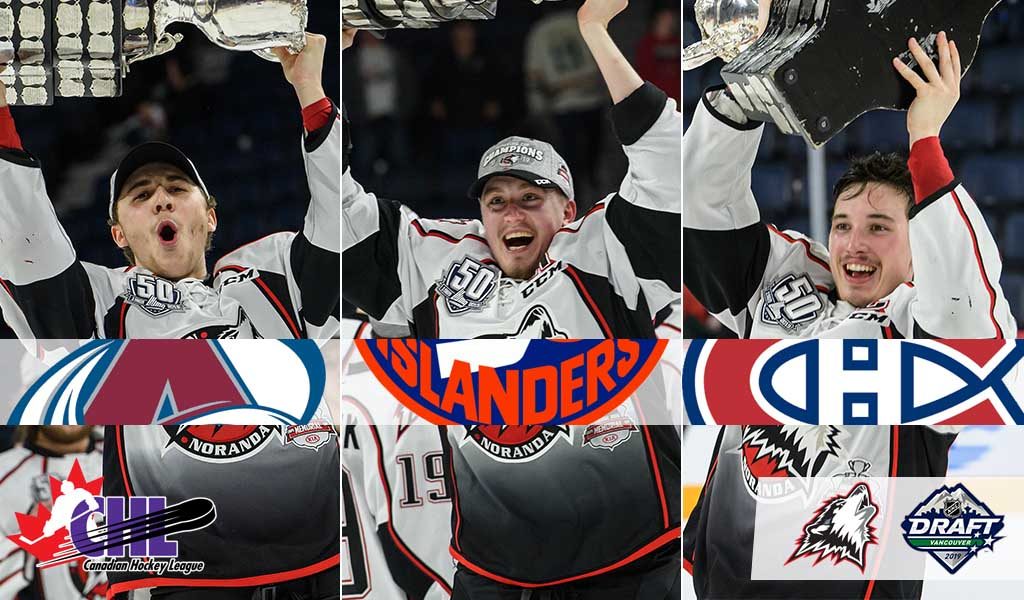 The celebrating continues in Rouyn-Noranda.

After a season in which the Huskies tied a Canadian Hockey League record with 25 consecutive victories, set the QMJHL’s all-time high-water mark with a 59-win season, and captured the President’s Cup as league champions, Rouyn-Noranda’s banner year then culminated with a win over the Halifax Mooseheads at the 2019 Memorial Cup presented by Kia.

The epilogue, however, came at the 2019 NHL Draft, where a trio of skaters who hoisted the Memorial Cup with the Huskies heard their names called by NHL clubs. The first selection came midway through the third round when the Colorado Avalanche chose forward Alex Beaucage with the 78th pick, a 17-year-old who finished second in team scoring in 2018-19 with 79 points in 68 games.

“Winning the President’s Cup and the Memorial Cup was something big for me, and I think being drafted right now is just better,” Beaucage said from the draft on Saturday. “I didn’t expect anything. Just being drafted is really good for me.”

Next off the board was forward Felix Bibeau, who in the days leading up to the draft was acquired by the Quebec Remparts. Bibeau served as an alternate captain with the Huskies this season and will be now be looked upon to provide that veteran voice and solid scoring support with his new club. In 63 appearances in 2018-19, Bibeau netted 28 goals alongside 41 assists. In the pro ranks, he’ll now skate with the New York Islanders, who chose him in the latter half of the sixth round.

Wow what a great day, so blessed to be part of the @NYIslanders organization! Thanks to everybody who supported me! pic.twitter.com/2x8tdaLB8R

Rounding out the list is Rafael Harvey-Pinard, who like Bibeau was moved following the championship run as he’ll now have the opportunity to lace up for the Chicoutimi Sagueneens. A Quebec native, Harvey-Pinard won’t have to go far when he begins his pro days as he was selected by the Montreal Canadiens with the 201st pick. Serving as the captain of the Huskies, Harvey-Pinard finished second in team scoring with 85 points in 66 appearances.

In all, the three skaters were a group of 18 players from the QMJHL who were selected in the 2019 NHL Draft: