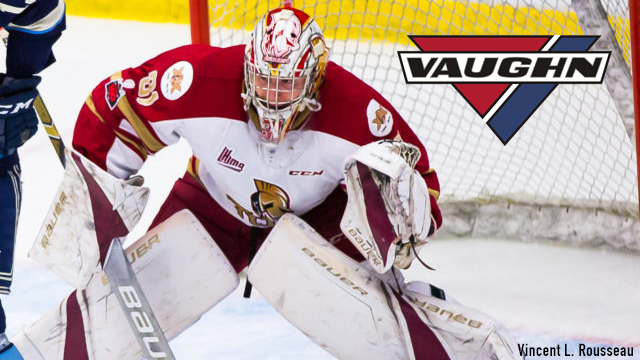 Toronto, ON – The Canadian Hockey League today announced that St. Louis Blues prospect Evan Fitzpatrick of the Acadie-Bathurst Titan is the Vaughn CHL Goaltender of the Week for the playoff week ending April 15 after posting a 2-0 record including one shutout with a goals-against-average of 0.96 and save percentage of .962.

Fitzpatrick turned aside 51 shots last week in a pair of victories against the Sherbrooke Phoenix to wrap up Quarter-Final action in the QMJHL Playoffs with a four-game series sweep.  In Game 3 on Tuesday night Fitzpatrick recorded a shutout against his former team with a 23-save performance as third star of the 5-0 triumph, then made 28 saves in Game 4 on Wednesday closing the door in a 3-2 overtime decision.  The Titan have advanced to their first QMJHL Semi-Final Series since 2006 and will face the Victoriaville Tigres beginning Friday night.

A 20-year-old from St. John’s, Nfld., Fitzpatrick joined the Titan in January where he won 17 games in 21 appearances with a goals-against-average of 2.24 and save percentage of .915 for the Maritimes Division champions.  So far this post-season he carries an 8-2 record with a league-best goals-against-average of 1.79 and save percentage of .930 which is among the league’s leaders.  He played more than three years with the Phoenix who chose him fourth overall in the 2014 QMJHL Entry Draft, and later became a second round pick by the Blues in the 2016 NHL Draft.