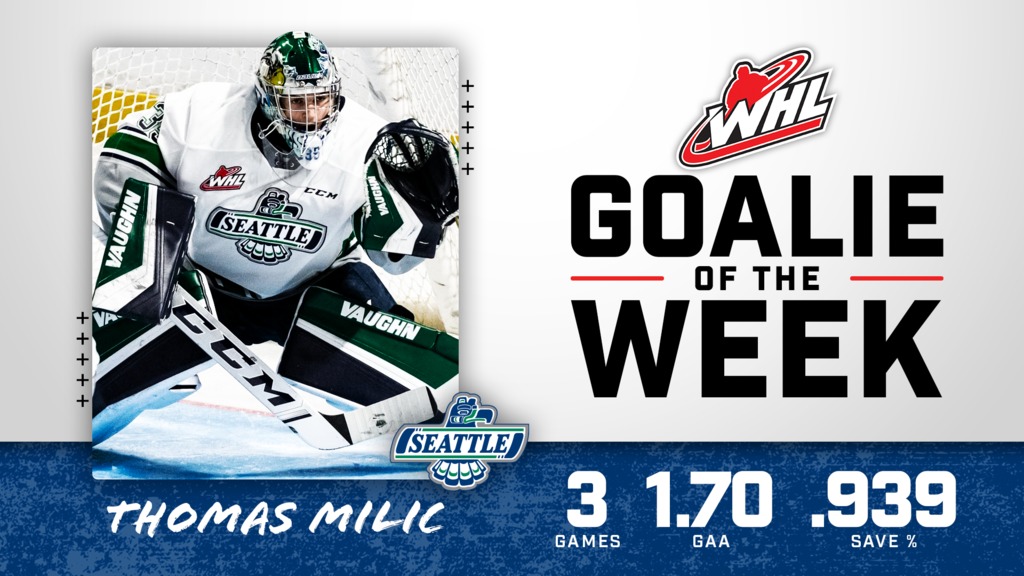 Calgary, Alta. – The Western Hockey League announced today that Seattle Thunderbirds goaltender Thomas Milic has been named WHL Goaltender of the Week for the week ending May 15, 2022.

The 2022 NHL Draft prospect posted a 2-1-0-0 record, a 1.70 goals-against average, .939 save percentage and one shutout as his Thunderbirds continue a best-of-seven series versus the Portland Winterhawks.

The product of Coquitlam, B.C. began his week on a winning note, turning aside all 28 shots he faced as Seattle shut out Portland 5-0 on the road in Game 3 Wednesday, May 11.

After a setback in Game 4 Friday, May 13, Milic rebounded with another stellar performance away from home in Game 5 Saturday, May 14, stopping 32 of 33 shots as the Thunderbirds came away with a 3-1 victory.

The 6-foot-0, 170-pound netminder, who earned U.S. Division Second All-Star Team honours during the 2021-22 Regular Season, was named first star in both Seattle victories this past week.

Milic was one of four Thunderbirds named to the NHL Central Scouting Final Rankings ahead of the 2022 NHL Draft, sitting 28th among North American goaltenders.

He was originally selected by Seattle in the third round of the 2018 WHL Draft. In 68 career WHL regular season and playoff games, he holds a 39-23-3-2 record, a 2.43 goals-against average, .913 save percentage and six shutouts.

Milic and the Seattle Thunderbirds return home to continue their Second Round series with the Portland Winterhawks in Game 6, slated for Monday, May 16 (7:05 p.m. PT, accesso ShoWare Center).