The Week That Was – Ready to defend gold on home soil 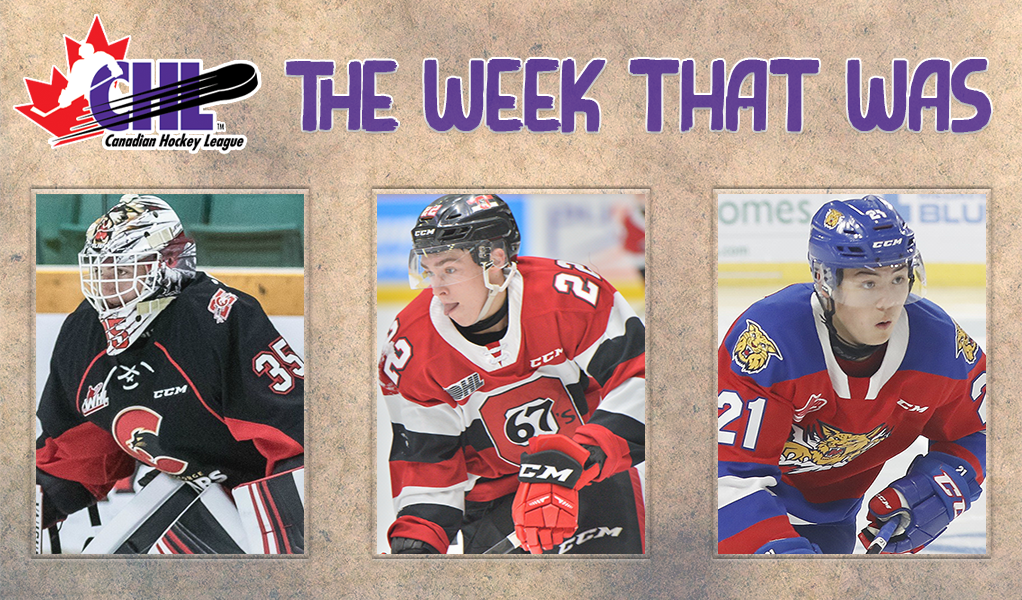 Taylor Gauthier’s story is one of resiliency.

Passed over in the past two NHL drafts, the Prince George Cougars netminder will have plenty of time to impress under the national spotlight as one of 25 players including three goaltenders named to Team Canada for the upcoming World Juniors beginning December 25.

“Once I heard the news, it was a huge weight lifted off my shoulders,” Gauthier said. “It’s been a stressful couple of days and to have that little bit of relief knowing that I made it, the dream has come true to wear the maple leaf. I am very grateful and happy but I also know that the work is just getting started. Now the goal is to win a gold medal for Team Canada.”

Gauthier’s addition to the World Junior squad counts his third step on Hockey Canada’s Program of Excellence ladder after previously strapping on the pads at the 2017 World Under-17 Hockey Challenge then the 2018 Hlinka Gretzky Cup, in which he was a late-entry in the gold-medal game to help guide the Great White North to a first-place finish.

“Coming into the gold-medal game halfway through the first period, it showed me that no matter what you have to be ready,” Gauthier added. “Going in there and seeing the team battle in front of me and coming out with the gold medal, it definitely proved to me that I am good goalie and I can give the team a chance to win.”

Back in Prince George, Gauthier has been a workhorse over the past two seasons, suiting up for a combined 105 games. With Team Canada, the Calgary native now has his latest chance to draw the eye of the scouting community.

“Going through the draft the first time and not getting selected, it was definitely a little heartbreaking,” Gauthier said. “I didn’t really know how to deal with that kind of adversity. Growing up, I had always been picked to play on the highest team. But I just got back to work and tried to put in the best effort that I could, give my team a chance to win every night, and control the things I can control.

“That was a big boost to my mental strength over the last year, trying to focus on the little things and not worrying about other variables like the draft or even making this team. It made things a little easier and helped me find my love of the game again in going out there, working hard, and having fun.”

Despite making his first tryout with Team Canada, World Junior camp offered a sense of familiarity for Jack Quinn.

The highest goal scorer to make the final roster – Quinn lit the lamp 52 times in only 62 appearances with the Ottawa 67’s last season – the Cobden, Ont., native will surely have no shortage of opportunity on the international stage where he is reunited with Ottawa head coach Andre Tourigny, who will double as the Team Canada bench boss.

For Quinn, it brings an added advantage of what is expected from the players.

"It's a lot of credit to Quinner and his character. He's very driven and competes hard everyday. I love that stuff."@HockeyCanada #WorldJuniors head coach Andre Tourigny compliments @Ottawa67sHockey forward Jack Quinn (@jackquinn_19) on being selected to represent @HC_WJC 🇨🇦 pic.twitter.com/WOjr8Xgd5u

“The systems (Tourigny) is preaching are the ones we do in Ottawa, so I know them and just what he demands from his players – a lot of hard work and a lot of intensity on the ice,” Quinn said. “I have gone through all of those habits before so I can perform them here.”

With Team Canada, the early goings have Quinn skating as part of the top line alongside fellow Buffalo Sabres first-round pick Dylan Cozens of the Lethbridge Hurricanes as well as Saskatoon Blades graduate Kirby Dach of the Chicago Blackhawks.

“Watching the World Juniors last year, I knew I wanted to be there the following year,” Quinn added. “I think I can be a big offensive player for this team. I want to drive the bus on my line, make plays, and be a goal scorer. I think offensively I can bring a lot.”

Spence getting his shot

You’d be hard pressed to find a player on Canada’s roster as well travelled as Jordan Spence.

Born in Australia then spending his formative years in Japan before moving to Prince Edward Island as a teenager, Spence brings a well-worn passport alongside an impressive on-ice skill set. A 2019 fourth-round selection of the Los Angeles Kings, the Moncton Wildcats blue-liner is often described as an undersized defender, but that hasn’t prevented him from putting points on the board.

Last season, Spence was named the recipient of the Emile Bouchard Trophy as the QMJHL Defenceman of the Year following a dominant campaign in which he record 52 points through 60 appearances. That offensive success has continued into the new season in which he has already tallied five goals and 11 assists in 13 games.

🇨🇦Huge congratulations to @jordanjs224. One of 25 players named to Team Canada @HC_WJC for this year's #WorldJuniors!

Reunited with former Wildcats captain @jak_pelletier who is also part of this year's roster!

Can't wait to see you both on the ice Boxing Day in Edmonton! pic.twitter.com/VcNlN7AH0G

“We were fortunate with the QMJHL starting in October,” Spence said. “For me, playing 13 games really helped. Coming into camp, I was confident and I was comfortable with how I have been playing. I think that really helped me with the intrasquad games and practices.”

With the effects of the pandemic allowing for an expanded roster of 25 players – two more than usual – Spence is among eight defencemen to make the final cut, including six rearguards who were first-round NHL Draft selections. Still, Spence is embracing the challenge to earn his spot when the puck drops.

“There are a lot of good players who tried out for this team, so I just wanted to showcase my skill and that’s why I took every (intrasquad) game as serious as possible and left it all out there,” Spence added. “It was a challenge but luckily I made the team and I am really excited. When I heard the news it was a big day and I was really happy, but it’s our time now to focus again and win the gold medal.”