The Week That Was – Getting set for the Under-18s 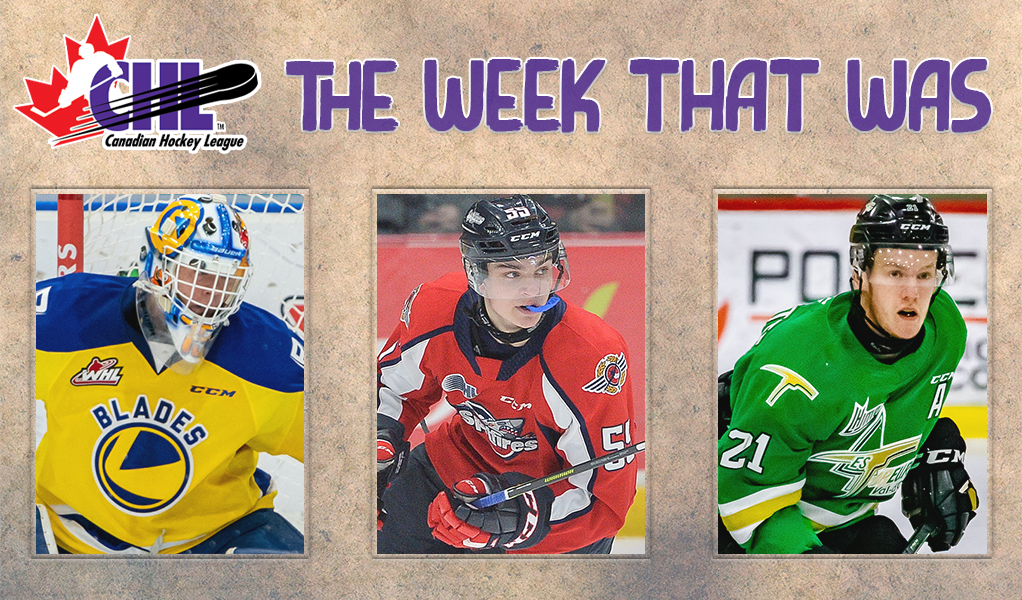 Johnston excited to return to the rink

The World Under-18 Championship is just around the corner.

Beginning April 26 in Texas, the 10-team tournament will see Canada vie for gold for the third time in event history, with its most recent first-place finish coming in 2013.

The Canadian roster will be made up of players who previously wore the Maple Leaf at the 2019 World Under-17 Hockey Challenge, with 23 Canadian Hockey League talents set to compete.

Among that group includes Windsor Spitfires centre and 2021 NHL Draft hopeful Wyatt Johnston who is thrilled to get back on the ice following a successful rookie campaign in which he netted 30 points counting 12 goals and 18 assists across 53 appearances.

“I am super excited for the chance to play and be selected by Canada,” Johnston told Jim Parker of the Windsor Star. “It has been a blessing and (I am) super excited to get going.”

A Toronto native, Johnston skated with Team Canada Red at the 2019 World Under-17 Hockey Challenge that saw him finish tied for the team lead in scoring after notching five points in as many games.

The latest national event promises to get Johnston back on the radar for talent evaluators following a long year away from the rink.

“This is definitely the perfect opportunity. Playing against the best players in the world is the best place for me to be and show improvements,” Johnston added. “I just want to go in there and play the game I know I can and be the type of player I am.”

Originally chosen with the sixth pick in the 2019 OHL Priority Selection, Johnston has been recognized as one of 123 CHL ‘Players to Watch’ ahead of the coming NHL Draft.

Nolan Maier has reached the pinnacle.

Coming away with a 3-2 win versus Winnipeg on Wednesday, the Saskatoon Blades netminder recorded his 86th career victory and moved into first all-time for the historic 57-year-old franchise.

Making the moment more memorable was that the victory saw Maier leapfrog former mentor and goaltending coach Tim Cheveldae who notched 85 wins with the Blades from 1985-88.

“I think that makes it even more special that it was (Cheveldae’s) record and for having him as a mentor for all those years for most of my career as a Blade, it makes it even more sweet,” Maier told Darren Zary of the Saskatoon Star Phoenix. “I know I am going to text him after the game here and thank him for everything he has done for me.

“I had not really thought of that goal when I was drafted here as a 15-year-old, but to be able to achieve that and to be able to celebrate it with the guys in the locker room right now is a pretty special feeling.”

Chosen 25th overall by Saskatoon in the 2016 WHL Draft, the now 20-year-old Maier has spent his entire junior career with the Blades in which he has earned an 86-47-9-4 career showing across 148 total appearances.

Maier’s success has only continued this season as he has found the win column in seven of his nine appearances to help the Blades to a strong start to the new campaign as the club sits one point back of top spot in the WHL’s Hub Centre Division.

Inking his three-year, entry-level contract with the Ottawa Senators on Saturday, the fourth-year Val-d’Or Foreurs defenceman will begin his pro career next season when his contract comes into effect.

“Maxence is a strong puck moving defenceman who absorbs a lot of ice-time for his team in Val-d’Or, the QMJHL’s top ranked team this season,” Ottawa Senators general manager Pierre Dorion said in a statement. “He maintains good vision, hockey sense, and puck skills. We are especially pleased to already see some significant strides he has made since being drafted.”

A seventh-round selection by the Senators in the 2019 NHL Draft, Guenette has spent his all of junior career with the Foreurs, totaling 25 goals and 81 assists for 106 points across 227 total games. This season, Guenette has continued to flash his offensive flair to the tune of five goals and 17 assists for 22 points, good for second in team scoring among all blue-liners.

A native of L’Ancienne-Lorette, Que., Guenette also represented Canada at the 2018 Hlinka Gretzky Cup, picking up one goal and one assist en route to a gold-medal finish.

Guenette was originally chosen by the Foreurs with the fifth pick in the 2017 QMJHL Entry Draft.