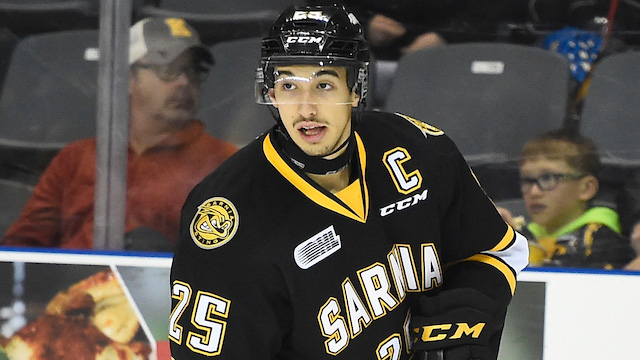 Toronto, ON – The Canadian Hockey League today announced that St. Louis Blues prospect Jordan Kyrou of the Sarnia Sting is the CHL Player of the Week for the week ending January 21 after scoring 11 points in three games including two goals and nine assists with a plus-minus rating of plus-6.

Kyrou recorded a trio of multi-point performances last week helping the Sting extend their winning-streak to seven and improving their overall record to 32-12-2-0.  His week was highlighted by a five-point effort on Sunday which extended his personal point-streak to seven games dating back to December 8 tallying the game-winning goal with four assists as first star of a 6-5 road win over the Oshawa Generals.  The Sting captain also chipped in three assists on Wednesday earning third star honours in a 6-3 road win over the Flint Firebirds, then scored a goal and two assists on Friday as part of a 5-3 win against top ranked Sault Ste. Marie giving the Greyhounds their first regulation loss in 30 games since the Sting defeated them on October 27.

A 19-year-old from Toronto, Ont., Kyrou is playing in his fourth season with the Sting who chose him in the second round of the 2014 OHL Priority Selection.  The World Junior gold medalist has reclaimed the OHL scoring lead with 23 goals and 50 assists for 73 points in just 35 games.  He was a second round pick by the Blues in the 2016 NHL Draft.

Also considered for the award this week was Matt Fonteyne of the Everett Silvertips with three goals and seven assists for 10 points in three games, and Jeffrey Truchon-Viel of the Acadie-Bathurst Titan with four goals and three assists for seven points in two games.