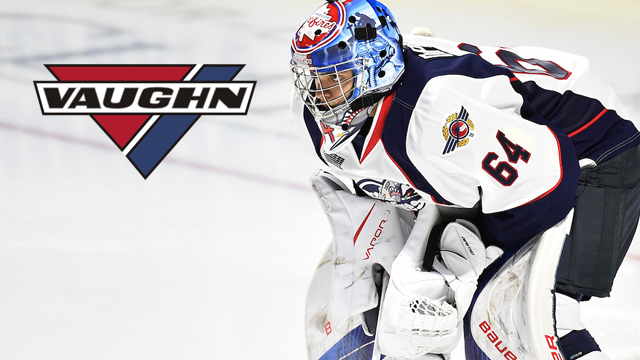 Toronto, ON – The Canadian Hockey League today announced that Vancouver Canucks prospect Michael DiPietro of the Windsor Spitfires is the Vaughn CHL Goaltender of the Week following opening week action ending September 24 with a 3-0-0-0 record including a shutout victory with a goals-against-average of 1.00 and save percentage of .966.

DiPietro turned aside 86 shots last week for the defending Mastercard Memorial Cup champion Windsor Spitfires who begin the 2017-18 campaign the way 2016-17 ended with victories on home ice.  In Thursday night’s home opener he made 26 saves as part of a 3-1 victory over the Saginaw Spirit, then earned first star honours in Friday’s 5-2 road win over the London Knights stopping 30 shots.  The top goaltender in May’s national championship then became the first OHL netminder to record a shutout this season with a 30-save performance on Sunday blanking the Guelph Storm by a 4-0 score while earning first star honours.  The shutout was the ninth of his career which builds on the franchise mark he established last season.

An 18-year-old from Amherstburg, Ont., DiPietro is playing in his third OHL season with the Spitfires who chose him in the second round of the 2015 OHL Priority Selection.  In 51 regular season appearances a year ago he posted a 30-12-4-2 record with a team record six shutouts along with a 2.35 goals-against-average and .917 save percentage.  DiPietro was a third round pick of the Canucks in the 2017 NHL Draft.