Semifinals at #WorldJuniors: Canada and Russia to play for gold 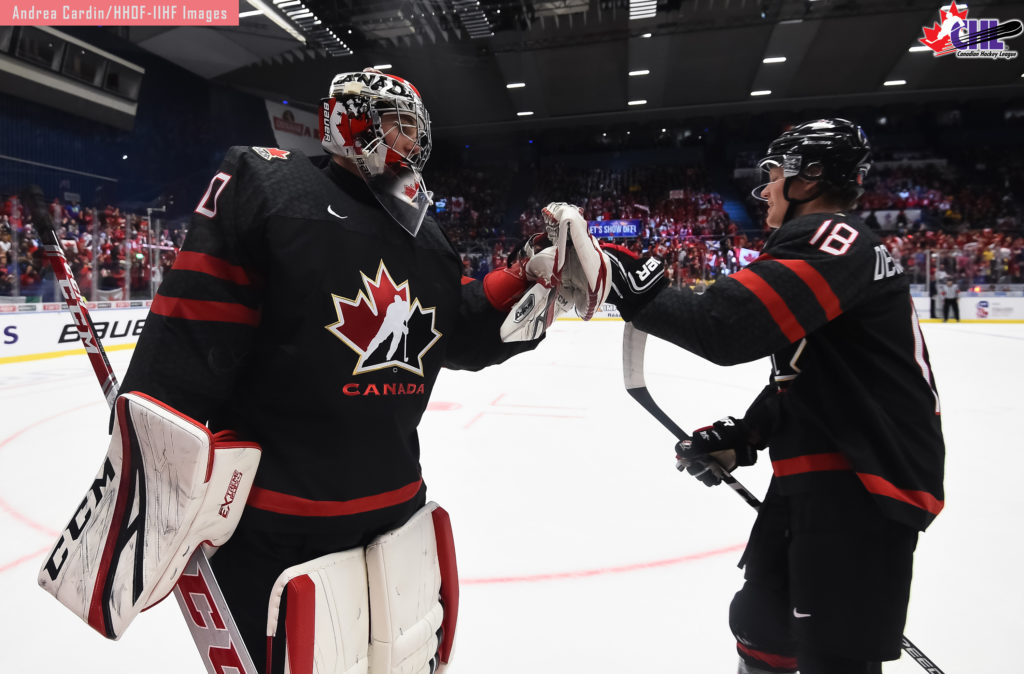 After falling to the Finns in quarterfinal action at the 2019 World Juniors, Canada earned redemption on Saturday with a 5-0 defeat of Finland to punch its ticket to Sunday’s gold medal game at the 2020 IIHF World Junior Hockey Championship.

St. Louis Blues prospect Joel Hofer of the Portland Winterhawks earned Player of the Game honours stopping all 32 shots he faced to record Canada’s first shutout of the tournament and first in a semifinal since 2006 coincidentally against Finland.

Following the game, the best three players of each team for the tournament, as selected by the coaches, were named and included Hayton with a team leading 11 points in six games, Lafreniere who is second for the squad with eight points in four games, and Liam Foudy (London Knights/Columbus Blue Jackets) who has four points in six games.

“We had a great start tonight. Our (defence) moved the puck quickly out of our end and our forwards were on the right side of the puck,” Canadian head coach Dale Hunter of the London Knights said following the 5-0 win. “It’ll be a big test tomorrow and we’ll need all the guys to play their game. We’ve faced a lot of adversity this tournament and tomorrow will be another step.”

Canada now plays for its 18th goal medal at the World Juniors and first since 2018 when the squad faces off versus Russia on Sunday.

Despite another successful preliminary showing, Sweden fell short in semifinal action Saturday versus Russia as the opposition prevailed 5-4 in overtime to earn a chance to claim its first gold medal at the World Juniors since 2011.

Providing the offense for Russia included Egor Sokolov of the Cape Breton Eagles who wrapped up the night with a pair of tallies to earn Player of the Game honours, Minnesota Wild prospect Alexander Khovanov of the Moncton Wildcats who scored one goal and one assist, as well as St. Louis Blues draft pick Nikita Alexandrov of the Charlottetown Islanders who registered an assist. For the opposition, Soo Greyhounds graduate and Toronto Maple Leafs first-round pick Rasmus Sandin shined with a four-point showing counting two goals and two assists en route to earning Player of the Game recognition for the Swedes.

After capturing the bronze medal a year ago, Russia now aims for its 14th gold medal at the World Juniors in facing off with Canada on Sunday.

Kazakhstan has forced a winner-takes-all showdown in its best-of-three relegation series versus Germany after coming away with a 4-1 victory on Sunday. Three separate scorers found the back of the net for Kazakhstan, while among the offensive contributors for Germany included Nino Kinder of the Winnipeg ICE who recorded an assist on his squad’s lone tally.

The winner of the series-deciding Game 3 held Sunday will qualify for the 2021 World Juniors while the losing squad will be demoted to Division 1A in place of elevated Austria.