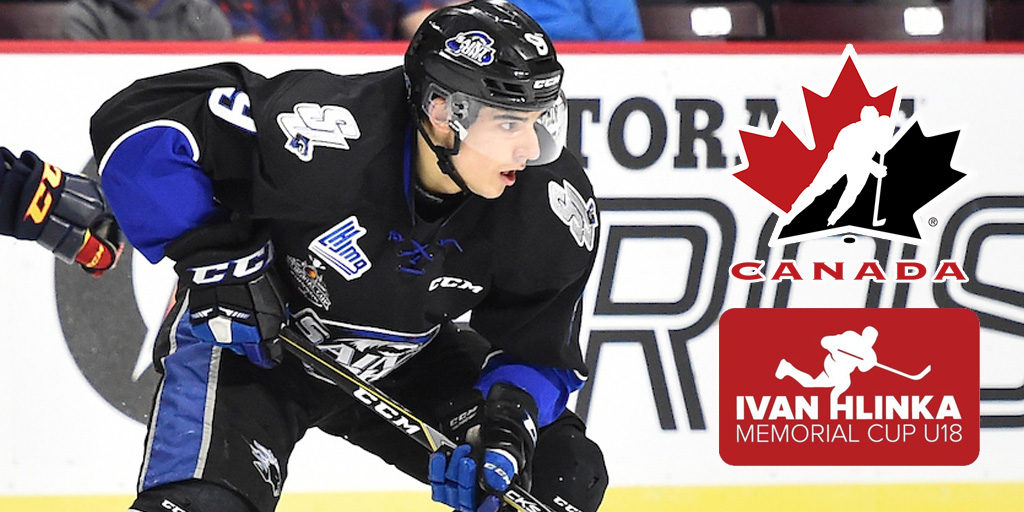 CALGARY, Alta. – Joe Veleno (Saint John Sea Dogs), the only Canadian selected to wear the red-and-white twice at the Ivan Hlinka Memorial Cup, will wear the ‘C’ at the summer hockey staple when Canada steps on the ice in Breclav, Czech Republic, and Bratislava, Slovakia.

The 6’1” forward, who was part of Canada’s National Men’s Summer Under-18 Team at the 2016 Ivan Hlinka Memorial Cup, will be supported by alternate captains Ty Smith (Spokane Chiefs) and Jett Woo (Moose Jaw Warriors).

“We’re real lucky with this team; there are a bunch of leaders in our room. Obviously Joe has been to the tournament before, he has a lot of experience, and we really felt that him coming back with his own age group would give him a good opportunity to lead,” said head coach Brent Kisio of the captains’ selection process. “Jett Woo was a captain last year at [the World Under-17 Hockey Challenge], Ty Smith was as well, so they bring some leadership skills, and we felt these were the right three guys for us. But like I said, we have a lot of great leaders on this team. The biggest thing is we want to make Canada proud, on and off the ice.”

All but two of the 22 players represented their country at the World Under-17 Hockey Challenge – an international tournament hosted annually in Canada that features three Canadian teams (Red, White, Black) and five international teams. Canada’s team also includes 15 players who’ve worn the red-and-white in international competition overseas – six having donned the Team Canada jersey at the 2017 IIHF U18 World Championship in Poprad and Spisska Nova Ves, Slovakia, in April (Dellandrea, Gravel, McIsaac, Smith, Thomas, Woo); and 11 having competed for Canada at the 2016 Winter Youth Olympic Games in Lillehammer, Norway (Burzan, Dudas, Fortier, Gravel, Groulx, MacDonald, McIsaac, Merkley, Rodrigue, Smith, Woo). Veleno returns to the line-up as the only Canadian player to have represented Canada twice at the Ivan Hlinka Memorial Cup, having been part of the 2016 team.

The Canadians head overseas on Wednesday, and will face the Czech Republic in a pre-tournament game on Aug. 5 in Breclav, and officially open the 2017 Ivan Hlinka Memorial Cup on Aug. 7 against Russia. The top two teams from each group advance to the semifinals on Friday, Aug. 11, with the gold-medal game scheduled for Saturday, Aug. 12.

Canada has won gold 20 times in 25 years of summer under-18 competition and will play in Group B this year with Finland, Russia, and Slovakia; Group A consists of the Czech Republic, Sweden, Switzerland, and the United States.

In 2018, the Ivan Hlinka Memorial Cup will be hosted on Canadian ice for the first time in history; as announced last November, Hockey Canada, the Czech Ice Hockey Association, and the Slovak Ice Hockey Federation have struck a partnership to host the prestigious summer hockey staple on Canadian ice on a bi-annual basis. Edmonton has been selected to host the tournament in 2018, 2020, and 2022.