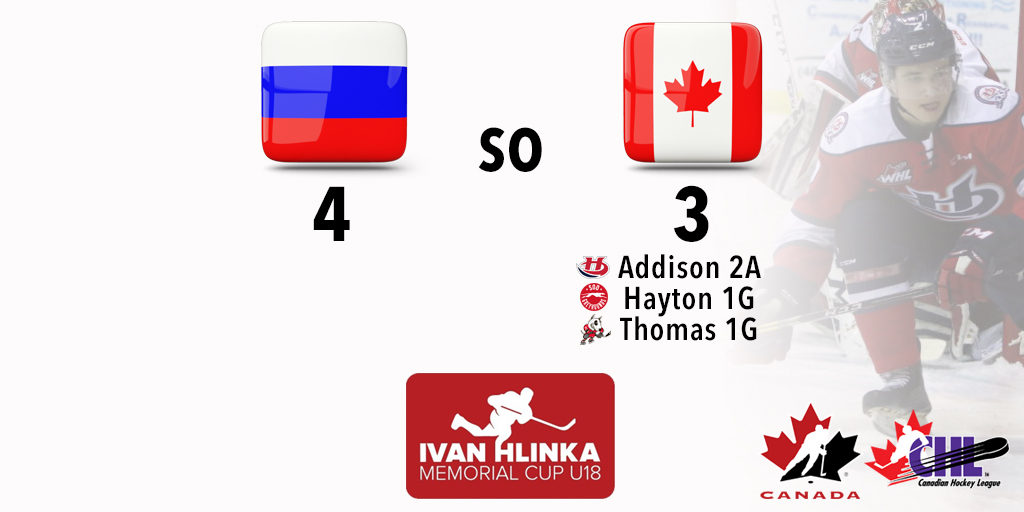 Bratislava, Slovakia – Akil Thomas (Niagara IceDogs) tied the score in the third period to force overtime but Russia prevailed in a shootout as Ruslan Iskakov found the back of the net twice, tallying the winning goal in a 4-3 decision to open the 2017 Ivan Hlinka Memorial Tournament in Bratislava, Slovakia.

Canada climbed out to a 1-0 lead six minutes into the opening frame as Barrett Hayton (Sault Ste. Marie Greyhounds) got them on the board first. The Russians would respond at the midway point of the frame though as Nikita Rtisev knotted the score at one.

Rimouski Oceanic (8th overall) CHL Import Draft selection Dmitry Zavgorodny scored his first of two in the game to put Russia up 2-1 before Calen Addison (Lethbridge Hurricanes) collected his second assist of the contest on an equalizer by Barrie Colts prospect Jack McBain with four minutes left in the second.

Entering the third period tied at two, Zavgorodny reinstated the Russian lead with an assist from Ottawa 67’s selection Nikita Okhotyuk two minutes in before Thomas wired a shot from the high slot over the shoulder of Russian goaltender Amir Miftakhov three minutes later.

Miftakhov would come up big in overtime, flashing the leather on Calen Addison’s penalty shot attempt to keep the score knotted at three before the Russians prevailed in a shootout.

The loss follows a 3-1 Canadian victory in pre-tournament action against the Czech Republic on Saturday. Goals came from Thomas, Addison and Aidan Dudas (Owen Sound Attack) while Hayton recorded a pair of assists. (Game Summary)

Team Canada looks for its first win of the tournament on Tuesday against Finland. Fans can catch the games streaming live on YouTube.