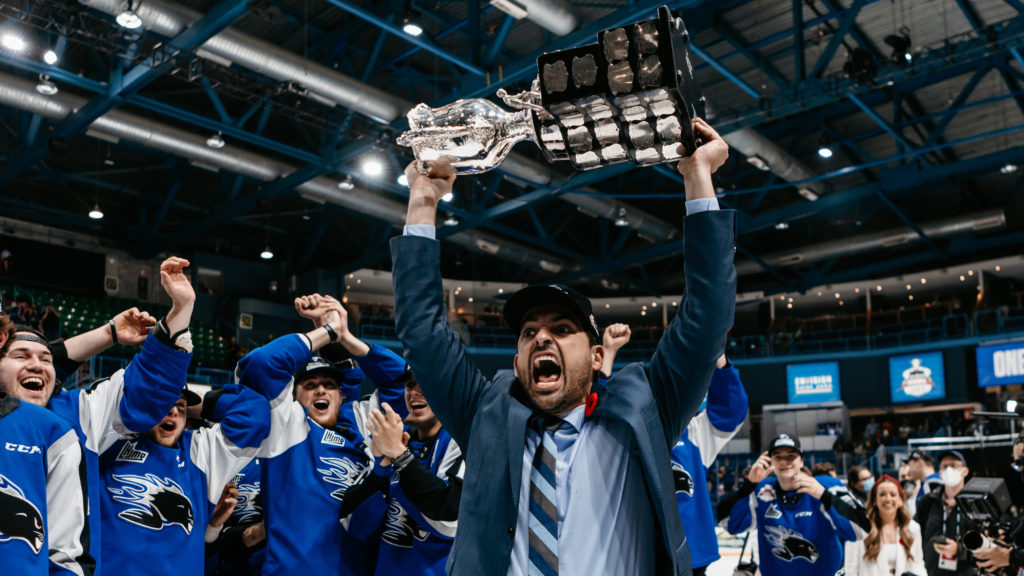 The Saint John Sea Dogs are proud to announce the promotion of Travis Crickard to the position of head coach for the 2022-23 season.

Crickard joined the Sea Dogs coaching staff in November 2021 as an assistant coach. The St. John’s Newfoundland-born coach won the Memorial Cup with the team last month. This was his second Memorial Cup appearance.

“I am incredibly grateful for the opportunity General Manager Trevor Georgie and Owner Scott McCain have given me to be Saint John’s Head Coach” said Crickard. “Coming off our Memorial Cup run I look forward to building upon and honouring the Sea Dogs’  success by developing the next wave of Sea Dogs athletes on the ice and young men off the ice. I also endeavour to create a lasting legacy as a community-focused coach.”

Since retiring as a player in 2010, Crickard led the Ottawa Jr. 67’s U18 AAA team to the Telus Cup final in 2013 and has worked across all three leagues in the Canadian Hockey League (CHL). He previously worked with the Ottawa 67s of the Ontario Hockey League (OHL) and Kelowna Rockets of the Western Hockey League (WHL) as an an assistant coach. In 2015, he won the Ed Chynoweth Cup with the Kelowna Rockets who made it to the Memorial Cup Final before ultimately falling in overtime to the Oshawa Generals.

Crickard has also spent time in New Zealand, as the General Manager of the Botany Swarm for three seasons and a one-month coaching internship with the New Zealand All Blacks Rugby team, and before joining the Sea Dogs last season, he served as Head Coach of the Waterloo Wolves U18 AAA team.

“Travis was an integral part of our coaching staff that just hoisted the Memorial Cup” said Sea Dogs President and General Manager, Trevor Georgie. “There were a lot of great lessons and experiences for everyone this past season, especially leading into and during the Memorial Cup tournament. We want to continue to build on those experiences and consistency is key to carrying that forward. Travis brings with him not only this past Memorial Cup experience, but many others as part of winning programs in the CHL and internationally. He is smart, prepared, focused, and like our players, he is always looking for opportunities to learn and get better. We’re excited for him and his family to continue to grow their lives here in Saint John.”

Crickard also has international coaching experience, having worked for Hockey Canada and holding coaching staff roles twice at the Under-17 World Hockey Championships, including winning gold as the video coach with the 2020-21 Under-18 Canadian Men’s team.

“Being a head coach in the CHL is something I dreamed about since I was 18 years old” said Crickard. “Today, that dream has been realized and I have many people to thank from this past season for their support toward this achievement and transition into the Head Coach role. My family and I are really excited about staying in Saint John where we feel at home. In the next few weeks, we will hire new assistant coaches and welcome many new faces and returning veterans to training camp. We look forward to icing a team that the fans can be proud of!

The Sea Dogs will begin training camp on August 15 and hit the ice for their first pre-season game on August 18th in Fredericton at the Aitken Centre. Tickets are available now.