Saturday Highlights: A night of firsts in the crease 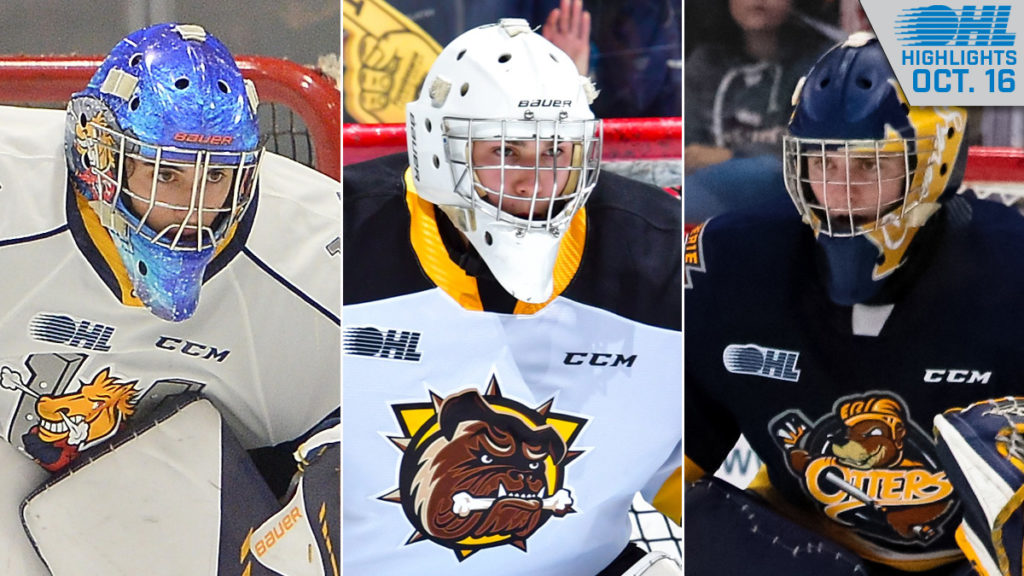 Otters thread the needle off the rush ?@ErieOtters capitalize in transition as @Canucks prospect Connor Lockhart (@C_lockhart73) sets up Elias Cohen (@EliasCohen97) for the game winner in Saginaw ? pic.twitter.com/ZSWjGZaYE3

Hounds are heading home with four out of a possible six points from their roadtrip to BAR-GUE-OS.
Tonight’s game story is now posted at https://t.co/BQnNEeFG2s
? by Peter Ruicci (Independent Media)
? Courtesy of @AttackOHLpic.twitter.com/VMEgM0E7VQ

LONDON 5, SARNIA 4 – OT
– Rookie forward Colton Smith scored his first OHL hat trick, completing it 8:57 into the second period.
– London led 4-1 before Sarnia rallied back to force overtime on a pair of goals from Nolan Burke.
– Smith and Burke now sit tied for the OHL goal-scoring lead with five goals apiece.
– Brett Brochu came up with a big overtime save before the Knights transitioned where Luke Evangelista set up Sean McGurn for the game winner.
– The Knights are the first OHL team to 5-0 on the season.
– Sarnia earns a point and is now 1-1-2-0.
GAME CENTRE & HIGHLIGHTS

HAMILTON 4, NIAGARA 0
– Former 15th round OHL Priority Selection choice Tristan Malboeuf was perfect in his OHL debut, posting a 27-save shutout.
– The Bulldogs blanked the IceDogs 4-0 for the second night in a row to improve to 4-0 on the season.
– George Diaco scored twice for Hamilton while Ryan Humphrey had a goal and two assists and Logan Morrison scored once and added a helper.
– Tucker Tynan made 20 saves for the IceDogs in the loss.
GAME CENTRE & HIGHLIGHTS