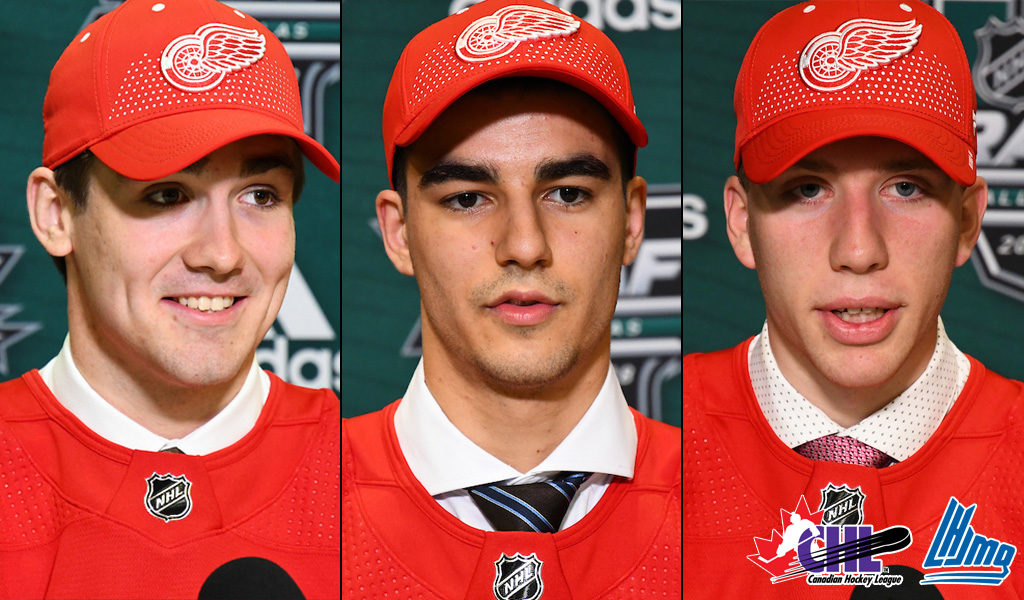 Three QMJHL stars are striving for the same goal.

“It was great feeling when I was drafted by Detroit,” sixth overall selection Zadina told Helene St. James of the Detroit Free Press. “The city is awesome. The arena – I was like, “wow,’ because I had never seen before this rink. It’s just unbelievable.”

“I was projected third, I’m going six. I don’t really care about numbers. I’m just glad I can be in Detroit.”

Sniper hopes to make teams that passed on him pay: https://t.co/eOcm5BdFnP pic.twitter.com/bMGnM0mfq4

The Czech winger had a successful development camp, scoring the overtime winner in an intersquad game and has formed quite a following in Hockeytown, citing an ever-growing number of followers on his Instagram account.

While voices from across the hockey world expressed a measure of surprise when Zadina fell into Detroit’s lap at sixth overall, a larger consensus reacted similarly to Veleno’s late selection at 30th overall.

The QMJHL’s first-ever player to gain exceptional status and play as a 15-year-old in the league managed to remain inside the first round as Detroit was more than happy to add the former QMJHL champion and first overall draft pick.

“I don’t think I was a 30th pick,” Veleno said on the first day of Red Wings development camp. “I think I could have gone a lot earlier, in my opinion, but I was lucky enough to fall to a historic, great organization in Detroit.”

While Veleno was all smiles in Detroit, he acknowledged he’s got plenty to prove as he works toward preparing himself for the next level.

“For sure it motivates me even more to be better than all those players that went ahead of me and turn out to be the best player in the draft,” he added.

“He is a good guy, so if we play together, it will be awesome,” Zadina said of his new teammate Veleno. “He is a good centre, so we could play well together. If he will pass me the puck so I can score the goals, it would be awesome.”

While Zadina and Veleno look to help Detroit offensively, Jared McIsaac was added to the depth chart at 36th overall to try and improve things on the back end. The 18-year-old from Truro, Nova Scotia put up 47 points (9-38–47) in 65 games alongside Zadina in Halifax last season and has an extensive international resume with Hockey Canada.

“Obviously Filip’s a generational talent,” McIsaac said of his teammate. “There’s not many goal scorers like him. I’m very happy to see him go and very happy to be drafted by the same team.”

While Zadina was the star in Halifax this past season, McIsaac is a known QMJHL commodity, being selected second overall in the 2016 QMJHL Draft before earning a reputation as one of the CHL’s top two-way defenders.

“One thing you notice about him, phenomenal footwork,” Grand Rapids Griffins coach Ben Simon told MLive.com’s Ansar Khan following development camp. “He does a lot of good things. He’s put together well as a hockey player. I think his feet are one of his biggest attributes.”

What a day for my family and friends! Truly speechless. Thanks to everyone who’s supported along the way. #redwings pic.twitter.com/G9yO9ME9Fc

With other CHL talent in the system including 2017 first round pick Michael Rasmussen (Tri-City Americans), 2016 first rounder Dennis Cholowski (Portland Winterhawks) and OHL graduate Filip Hronek (Saginaw Spirit) among others rising through the ranks, the Red Wings eagerly await the coming wave of new recruits.

The club’s AHL affiliate in Grand Rapids is a year removed from a Calder Cup crown as contributors in that title run including CHL grads Svechnikov (Cape Breton Screaming Eagles), Tyler Bertuzzi (Guelph Storm) and Joe Hicketts (Victoria Royals) will be knocking on the door in 2018-19 for a chance to become NHL regulars.

Zadina signed his entry-level NHL contract with the Red Wings last week while Veleno and McIsaac will be kept busy this summer as both received invitations to Hockey Canada’s World Junior Summer Showcase program in Kamloops, BC from July 28 to August 4th.

Regardless of where the trio ends up next season, they’ve left their mark on the QMJHL as they continue to work towards a full-time role in Detroit in the years to come.