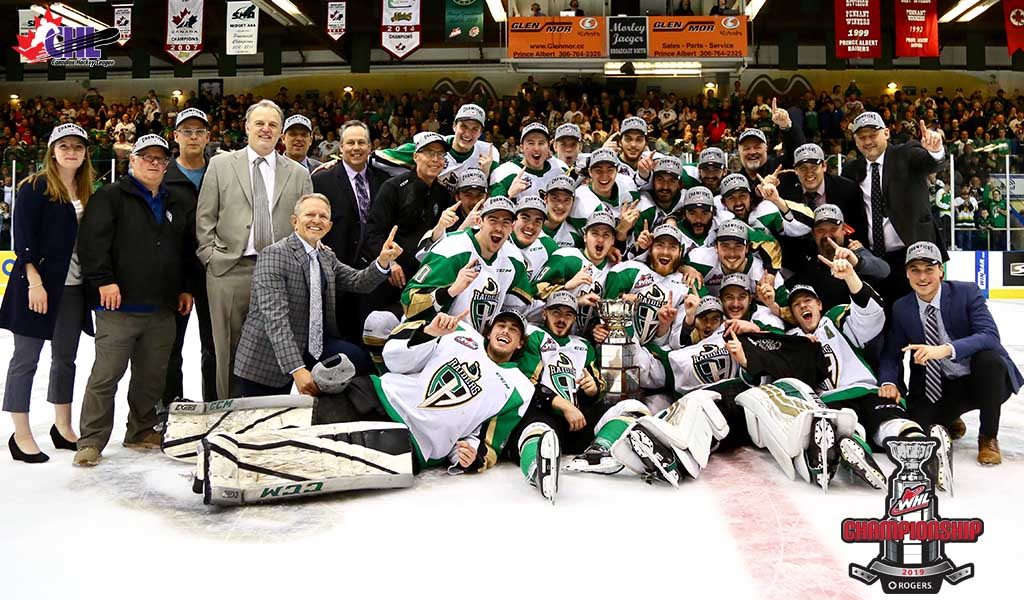 Dante Hannoun’s league-leading 14th goal of the 2019 WHL Playoffs came 18:25 into overtime Monday to lift the Raiders over the Vancouver Giants in Game 7 of the 2019 Rogers WHL Championship Series at the Art Hauser Centre in Prince Albert, Sask.

Goaltender Ian Scott, a prospect of the Toronto Maple Leafs, was named the Most Valuable Player of the 2019 WHL Playoffs.

“As a kid, you dream about it,” Hannoun said of the moment. “Game 7, overtime of the championship; there’s nothing better than that.”

Up 3-1 earlier in the series, the Raiders had found themselves challenged by the Giants, who had staved off elimination twice to force the winner-take-all game.

With the tension inside the building enhanced by the sellout crowd of 3,289, both teams started strong.

However, it was the pair of goaltenders standing tall. David Tendeck, a prospect of the Arizona Coyotes, and Scott each stopped nine shots during the opening 20 minutes of play.

“It’s obviously great to be recognized like that,” Scott said of his WHL Playoffs MVP award. “In playoffs, it’s a team effort, team win. I wouldn’t be standing here today without all the guys in the locker room. They’re my brothers and we’ve been through a lot together.”

The game’s first goal would come via Giants forward Milos Roman, a prospect of the Calgary Flames. Bowen Byram, a prospect eligible for the 2019 NHL Draft, controlled the puck and cut to the outside to elude a defender. As he charged toward the net, he found Roman at the opposite side with the perfect cross-ice pass 4:45 into the middle period.

Later in the period, the Raiders would tie up the game. Moments after being denied by Tendeck on a great shot, Noah Gregor, a prospect of the San Jose Sharks, was rewarded in his pursuit of the back of the net. With the puck on his stick at the top of the offensive zone, Gregor dangled the puck past a defender then beat Tendeck glove side to put the home team on the board.

Just 4:25 into the third period, Gregor gave the Raiders their first lead since the first period of Game 6. On the rush up ice, Sergei Sapego completed a pass to Gregor, who beat Tendeck glove side again, this time within a small range to the right post.

“From the second I got here, the mentality was to win the league and we were able to do that,” Gregor said. “After Game 6 I wasn’t too happy with my performance. I just wanted to lay it all out there in my last WHL game.”

As the Giants had done in Games 5 and 6, they found a way to prolong their season. On the power play with 11:30 to go in regulation, Roman sprung his captain Jared Dmytriw up the ice on the rush. As the captain and Craven, Sask. product sped into the zone and unleashed a shot on Scott, Roman trailed behind where he was in the right position to bang home the rebound.

As the minutes crawled off the score clock, an agonizing wait for both teams and their fans, each gave it their best effort to win it for their side.

The most harrowing of chances came with 2:02 left in regulation. Brett Leason, a prospect eligible for the 2019 NHL Draft, collected his own rebound and put the puck on net from the side, with it dancing through the blue paint going untouched and out the other side.

“I’m very proud of the way our guys responded,” said Vancouver Giants head coach Michael Dyck. “We did so many good things and this group has come so far in a year. The way we battled through some tough times in this series, to respond after Game 3, and make a push to come back here and push this to overtime, I couldn’t be prouder of these guys.”

Monday’s match was instead destined for overtime, adding to the intensity of a classic among WHL Championship lore. Faced with a penalty kill into the first overtime, the Raiders managed to escape the situation without any harm.

Just shy of two minutes after that kill ended, Hannoun etched the 2019 Raiders into WHL Championship history. Slipping past the Giants’ defence, Gregor returned the favour from his previous two goals by finding Hannoun for the back-door shot that thumped into the back of the net, sending northern Saskatchewan into a frenzy.

Byram led the league in scoring during the 2019 WHL Playoffs with 26 points (8G-18A) in 22 games. Hannoun finished with 14 goals to lead all players while Byram led the field with 18 assists.

The Prince Albert Raiders will now represent the WHL at the 2019 Memorial Cup presented by Kia in Halifax, N.S, from May 17 to 26.