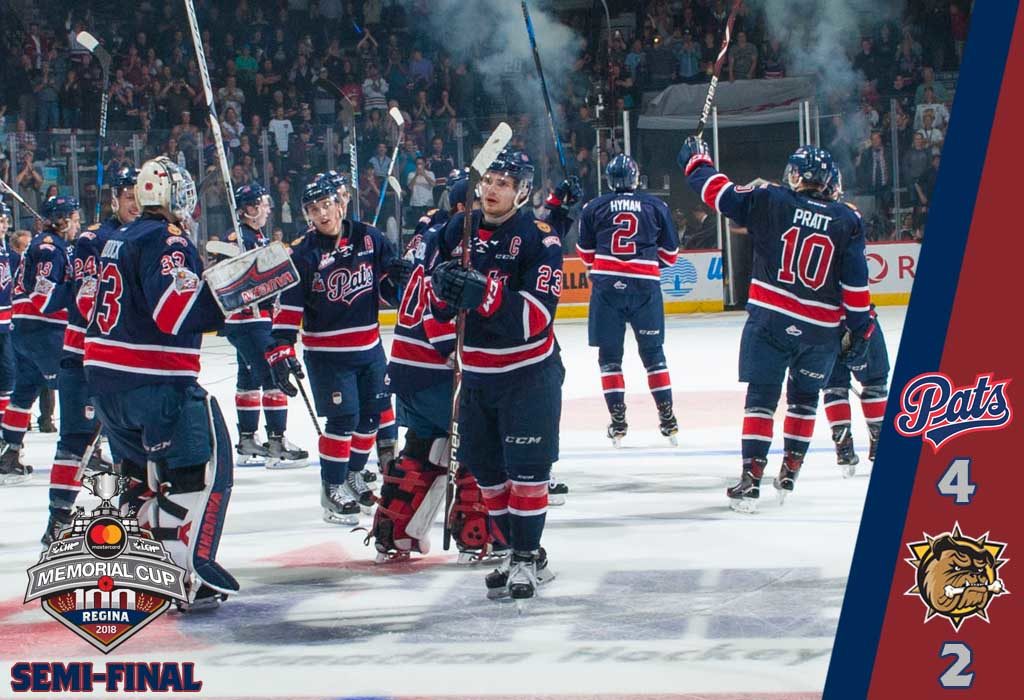 In their CHL record 16th appearance, the host Regina Pats will play for the 100th Mastercard Memorial Cup title on Sunday.

A 44-save performance from rookie goaltender Max Paddock backstopped the Pats past the OHL champion Hamilton Bulldogs 4-2 as tournament scoring leader Sam Steel was a factor again, registering a goal and an assist to send his club to its first Championship Final since 1974.

Trailing 2-1 to start the third, the Bulldogs put in a desperate final 20 minutes, outshooting the Pats 22-5 but were unable to bridge the gap as the 6,484 at the Brandt Centre headed home in anticipation of the franchise’s biggest game in over 40 years.

“Coming into the game I had a good feeling about it,” said the 17-year-old Paddock during post-game celebrations. “All of the guys felt good and we trust each other out there. I thought we played a good sixty minutes today.”

Veteran blueliner Josh Mahura had an assist in the win, logging big minutes and was one of several bright spots for the Pats, who follow the defending champion Windsor Spitfires as the second straight host team to reach the Final.

“It’s pretty surreal,” said the fourth year WHL veteran. “I’ve never really had a moment like this before so it’s awesome to see for the city here and it’s awesome to be a part of this.”

A physical first period saw both clubs fight for space in the early going but the swift Regina transition game put the first dent in the scoreboard as Austin Pratt saved his first goal as a Pat for the Mastercard Memorial Cup Semi-Final. The Lakeville, Minn. native broke in on a two-on-one with linemate Emil Oksanen as the Finnish forward sent a shot off the pad of Kaden Fulcher, inspiring a rebound for the oncoming goal-scorer as he made it 1-0 5:22 into action.

Paddock denied Hamilton’s Robert Thomas on a high-quality scoring chance moments later to keep Regina in the lead as they carried a 1-0 edge into the first intermission.

The Bulldogs pressed in the opening half of the second as Marian Studenic struck iron nearing the midway point of the frame before Hamilton drew even on a goal from Toronto Maple Leafs prospect Nicolas Mattinen a shift later. The big defenceman stepped into a one-timer from partner Benjamin Gleason at 7:35 to put the Bulldogs on the board.

Regina responded with nine minutes remaining in the second when Mahura carried the puck through the neutral zone, gaining the blue line before dishing off to overage winger Cameron Hebig who beat Fulcher past the blocker, giving the Pats a 2-1 lead after two.

Hebig nearly took out insurance on the Regina lead two minutes into the third but was thwarted by a great lateral save by the right pad of Fulcher.

Despite Hamilton carrying the third period play, the Pats found a way to pull ahead 3-1 as Steel took advantage of a Bulldogs miscue with six minutes left in regulation. The Pats captain intercepted Fulcher’s puck-playing attempt before beating the goaltender and a pair of white jerseys back to the net, blowing the roof off the Brandt Centre as Regina held a two-goal cushion with mere minutes to go.

The Bulldogs weren’t finished though. Montreal Canadiens prospect Will Bitten responded just 1:13 later, racing down the wing to catch up with a rolling puck, chipping it over the shoulder of Paddock to cut the Regina lead to one.

A desperate Hamilton push saw Paddock turn aside attempts by Studenic and MacKenzie Entwistle before Steel found an opening, pushing the puck up-ice for a Jake Leschyshyn empty net goal to seal the deal and send the Pats to the big dance.

“They stuck with it, they won an OHL championship and we ran into a team that did all the little things right to give themselves a chance to win,” said Bulldogs head coach John Gruden post-game.

“After it’s tough always to go in, and I said that ‘hockey doesn’t define you’,” he added. “Their character is outstanding.”

Hamilton finished with a commanding 46-24 advantage on the shot clock as Paddock was the difference, continuing his strong showing on a big stage.

Blueliner Benjamin Gleason led the Bulldogs in tournament scoring with five points (1-4–5) while Fulcher was among the statistical leaders in goaltending categories, posting a 2.27 goals-against average and .918 save percentage in four games.

The Pats (3-1) advance to Sunday’s Championship Final where they’ll face the QMJHL champion Acadie-Bathurst Titan (2-1) who they dropped an 8-6 decision against one week ago. The Pats are in the hunt for their fifth Mastercard Memorial Cup title while Acadie-Bathurst looks to win its first ever.