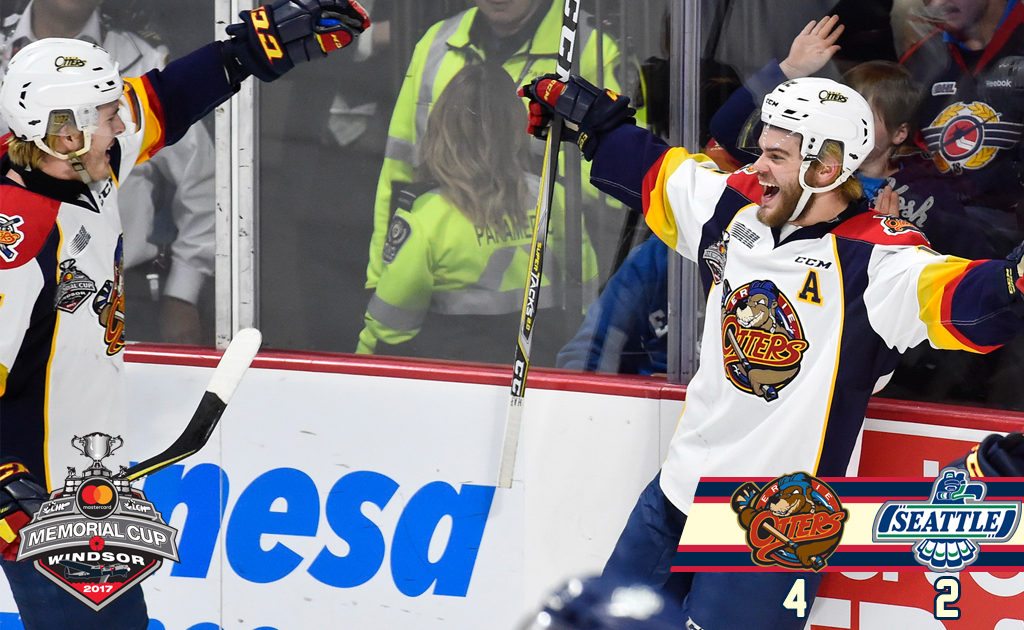 The Erie Otters set the pace in their Mastercard Memorial Cup opener as the big names came up with big performances in a 4-2 win over the Seattle Thunderbirds.

OHL scoring champion Alex DeBrincat earned first star honours with a goal and an assist while captain Dylan Strome broke a 2-2 tie with the game winner 1:36 into the third period as the Otters started their 2017 Mastercard Memorial Cup schedule off on the right foot.

“It’s huge to win the first one,” said Strome after the final buzzer. “There were some tense moments there for us but we got some big shot blocks from unsung heroes like Pettit, Cernak and Sambrook.

“We need those kind of efforts and we’re happy to win the first one.”

“I thought we played pretty well,” said Knoblauch. “Maybe the one thing that we were missing was converting on our opportunities. If their goalie doesn’t play so well we might be looking at a different outcome.

The Otters came out firing in the first, outshooting Seattle 11-3 in the opening 10 minutes of the frame as Stankowski provided a number of timely saves including a pair to thwart Erie off the rush.

The T-Birds settled down in the latter half of the period with speedy forward Scott Eansor failing to convert on a breakaway late in the frame.

Stankowski kept the game scoreless early in the second, stopping Taylor Raddysh on a breakaway inside the opening two minutes before flashing the leather on the 65-goal scorer DeBrincat on a power play chance from the high slot moments later.

DeBrincat wouldn’t be denied though, opening the scoring on the next shift with his patented quick release.

Veteran forwards Kyle Pettit and Warren Foegele converged in the corner to win possession, sending the puck to the slot for a waiting DeBrincat who swatted it inside the far post on the power play at 5:05.

Seattle struck back before the midway point of the second on a goal from Eansor who blazed down his off-wing to beat Troy Timpano with a wrister inside the far post at 9:01.

Erie wrestled back control of the lead with just 2:01 left on the second period clock as Detroit Red Wings prospect Jordan Sambrook gained control of a puck deep in Seattle territory and proceeded to drive the net, holding on the forehand to tuck a puck past the pad of Stankowski.

The T-Birds set up an thrilling third period, tying the score 2-2 just over a minute later with 53 seconds to go as blueliner Austin Strand took a Mathew Barzal feed to walk in off the point and beat a screened Timpano over the glove.

Erie outshot Seattle 17-6 in the second period for a two period advantage of 29-14.

The Otters continued to drive possession and stretch out the ice in the third and it quickly paid off as Taylor Raddysh connected with Strome off the rush, centering to the captain who finished on a backhand in the slot with the ice still drying 1:36 into the period.

Christian Girhiny would add an empty netter with 1:19 to go to seal the deal and make the Otters the second Ontario Hockey League club to win in as many games at the 2017 Mastercard Memorial Cup.

Fortunately for Seattle the turnaround will be a quick one as they prepare to face the host Windsor Spitfires on Sunday night.

“It’ll be good to get back at it,” said Seattle head coach Steve Konowalchuk. “Our identity wasn’t there at times during the games and we’ll correct a few things.

“We have a few individuals that can rebound it’ll be good to have a quick turnaround.”

The Otters win the first all-American showdown at the Mastercard Memorial Cup since 2007 when the Plymouth Whalers defeated the Lewiston Maineiacs on two separate occasions.

The national championship continues on Sunday when the Thunderbirds (0-1) get back to work against the host Windsor Spitfires (1-0) at 7:00pm ET/4:00pm PT on Sportsnet, TVA Sports and CHL Live.