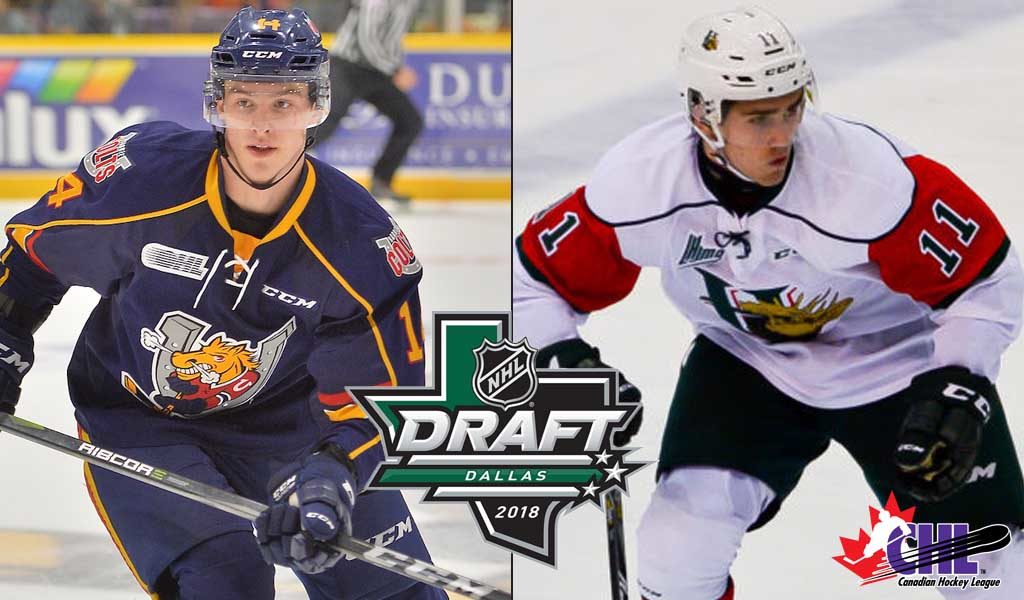 With the 2018 NHL Draft a week away, teams are putting the finishing touches on their draft lists following a season of observation that culminated in last week’s NHL Scouting Combine in Buffalo.

Joining smooth-skating Swedish rearguard Rasmus Dahlin at the top of draft lists across the NHL as well as the league’s own Central Scouting Service are CHL forwards Andrei Svechnikov of the Barrie Colts and Filip Zadina of the Halifax Mooseheads, both players who excelled in their first and potentially only Canadian Hockey League campaign.

Both players who have impressed scouts with high-end skill sets and offensive instincts, there’s a strong likelihood both Svechnikov and Zadina make the jump to the NHL next season after serving as offensive leaders on their respective clubs and each putting forth standout performances at the 2018 IIHF World Junior Hockey Championship.

Forward @ASvechnikov14 of @OHLHockey‘s @OHLBarrieColts is the top ranked skater by @NHLCentralScout and plays the game with speed and high end offensive instincts.

The Buffalo Sabres are expected to start next week’s proceedings in Dallas by selecting Dahlin, leaving the Carolina Hurricanes, Montreal Canadiens, Ottawa Senators and Arizona Coyotes with some tough decisions to make in the top five selections.

Svechnikov, who received both Sherwin-Williams CHL Top Prospect Award and OHL Rookie of the Year honours this past month, has already garnered interest from Carolina as newly named GM Don Waddell spoke with the media last week.

“I don’t want to give all my cards away, but he is certainly at the top of our list,” Waddell told Raleigh ABC 11 News. “There’s some other really good players there so we gotta make sure we know them all in case, you never know what might happen or what might be offered to us. If I was going to the draft floor tonight to make the pick, I’d be picking Andrei.”

The younger brother of former Cape Breton Screaming Eagles standout turned Detroit Red Wings farmhand Evgeny Svechnikov, Andrei carried the OHL’s longest point streak of 23 games from January 18th through March 17th. He finished with 72 points (40-32–72) in just 44 games, the most by a Colts rookie since Mark Scheifele in 2011.

“It was a great season. We have a good team in Barrie and a really good coach,” said Svechnikov, referring to Hockey Hall of Fame bench boss Dale Hawerchuk. “I adjusted pretty quick. We had guys who helped me a lot and our coach helped me a lot. We talked everyday about how I can be learning more about the game.”

While Svechnikov is the top North American ranked skater on NHL Central Scouting’s Final Rankings, Czech forward Filip Zadina of the Halifax Mooseheads comes in at third on the list, one spot behind winger Brady Tkachuk of the U.S. National Development Program.

“It was one of the more important decisions of my life and I’m glad I made it,” Zadina told NHL.com’s Mike Morreale of his path to playing in Halifax. “I had a good season and enjoyed my time with my teammates, coaches and my billet family.”

The son of a long-time pro, Zadina turned heads in the QMJHL with 82 points (44-38–82) over 57 games to earn the Mike Bossy Trophy as the league’s Top Draft Prospect while leading all rookies in scoring.

“I knew playing in the Canadian Hockey League and the heavier workload on the smaller ice would be a benefit. I also saw other European players playing in Halifax and having so much success in their draft year.

“Hischier is playing in the NHL now and one of the best young players in the League,” he continued. “Maybe if I work hard this summer, I can be in the same spot like he is.”

Both Svechnikov and Zadina played key roles for their respective countries at the 2018 World Juniors, with the former registering five assists in as many games for his native Russia while the latter was named to the tournament all-star team with eight points (7-1–8) in seven games as the Czech Republic placed fourth.

A big day for the CHL’s draft eligibles draws nearer on the calendar as the 2018 NHL Draft gets underway at the American Airlines Center in Dallas, Texas on Friday June 22nd.